Who's shutting down Sweden's transparency sites? ... what your electricity bill should really say ... Qld floods campaign gutted of funding ...

Transparency sites shut down — by whom? Two Swedish transparency sites that have supported WikiLeaks and Julian Assange have been abruptly shut down at the request, seemingly, of the Swedish defence forces. FOI site undermattan.com  and leaks site corruptio.blog.com have been closed in recent weeks by their host. The group behind undermattan.com claims their host advised it was done so on the request of the Swedish Army’s Special Intelligence unit.

Undermattan used Swedish Freedom of Information laws to obtain dozens of pages of communications between the Swedish prosecutor and UK lawyers over Assange’s case, which confirmed that Swedish prosecutors had rejected three separate dates proposed by Assange’s lawyers for him to have a further interview in Sweden in relation to s-xual assault claims. The material was shifted to the Swedenversusassange site subsequently posted (after undermattan had been taken down). Both sides published materials relating to the Swedish army and Swedish involvement in Afghanistan. Web tracking sites show that undermattan.com was heavily visited by Swedish government, police and army addresses.

But does it fit the bill? We’ve had some interesting feedback to our tip from a NSW reader who was annoyed at this red notice on their Origin/Country Energy electricity bill:

Our reader felt the notice was somewhat misleading and political, trying to finger environmental schemes (and the federal government) for recent power price hikes — without mentioning all the other reasons electricity has risen, eg gold-plating of networks, mismanagement …

Turns out other readers agree, but there’s more to this tip than we thought. The NSW’s Coalition government, via the Independant Pricing & Regulatory Tribunal (IPART), forces electricity retailers to run this message. The words (and apparently even the colour) are IPART’s.

A NSW insider passed this on:

“Yes, the statement is inaccurate and politically biased, but it was drafted by the good folks in our democratically elected state government. In fact, in order to guarantee that they could mandate this idiocy, the current topdog scumbags on Macquarie Street reneged on implementation of the new national regulatory framework covering retail of energy services … thus disadvantaging customers in five states and Canberra.”

Our tipster reckons some companies have stood up to the regulators and added lines on their bills on the cost of smart meters.

Tips is curious to know what messages appear on your electricity bills, re: power price hikes. Can you email us your bill? (Blank out your personal details, we don’t need to know how often you shower.) Are other states blaming green schemes and the feds? Crikey is planning to put a proposal to IPART of other “red notices” they could include on their bills about why electricity bills have risen so much. But we need your help — send in your suggestions.

Floods of cuts in Qld? A mole from north of the border passed on a rumour doing the rounds that Campbell Newman’s government, which rarely sees a program it doesn’t want to cut, has scrapped the “If it’s flooded, forget it” campaign. Queensland has had a rough spell of floods in recent years, so the campaign seems like a sensible idea.

We found there was some truth to the rumour. The government has not axed the program — it was relaunched last month, and a spokesman confirmed it “certainly hasn’t been scrapped”. But its funding has been gutted. The spokesman said the program was part of a $3.8 million emergency response campaign, and funding for the “If it’s flooded, forget it” part of it has been cut to $38,000, which pays for talent fees for people in the ads.

The spokesman said while there’s “very little” funding remaining (in line with cuts to government advertising across the board), the government is getting the message out through social media, and collaborations (read free advertising) with government-associated entities like Queensland Rail.

It’s the end of the world as we know it. The world ends on Friday (Mayan time), which is why Tips has not bought any Christmas presents this year. How will you prepare for — and spend — the big day? Drop us a line and we’ll run the best ones on Friday morning, to go out with a bang.

The folks at NASA have put together a video on “why the world didn’t end yesterday,” which one imagines was supposed to be released on Saturday. My, if the world does end on Friday they will have egg on their faces! 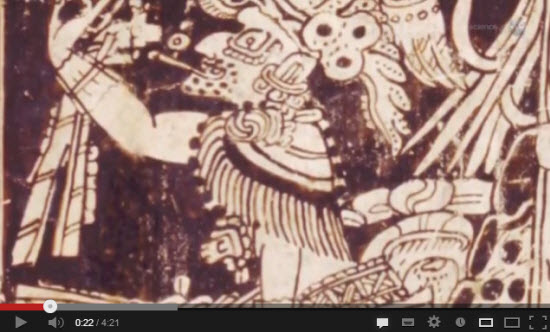