The massacre of young children in Newtown was so nihilistic and meaningless that it has exposed the empty rhetoric and false illusions of the US gun lobby. From Connecticut, our writer-at-large braces for a long fight. 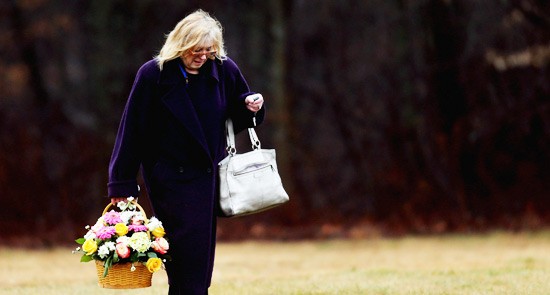 With the first funerals from the Sandy Hook elementary school massacre being held today, the gun control debate has started swinging around for the first time in decades. After two days of mourning, small but active protests have begun, with an Occupy-organised crowd marching on the NRA headquarters in DC, Senate majority leader being joined by “Blue Dogs” such as nominal Democrat Joe Manchin from West Virginia in calling for legislative action based on assault weapons.

Former Mitt Romney advisors, GOP congressman-turned-broadcaster Joe Scarborough, and other have crossed the line to say that a real debate is required on what action to take. The pilot wave of this new movement was provided by the President, addressing the bereaved community of Newtown, telling the nation that “we’re not doing enough … and we will have to change”.

But change is far from certain to come. As Nate Silver detailed in a piece on his blog, the gun control debate has shifted sharply towards “second amendment rights” in the past decade, with a proposed ban on assault weapons dropping in op-ed and commentary mentions by more than 90% in the past decade, while “rights” has risen remorselessly.

Intensive lobbying by the NRA and others has all but nobbled any attempt to have a debate on guns, and ramrodded the fatalism by which massacres and gun frequency remain uncorrelated. The NRA has gone silent in the wake of Newtown — there’s been no tweeting since 14 December (“Florida nears one million permits for concealed weapons!”) and has taken its Facebook page down. None of the pro-gun lobby would appear on the Sunday morning talk shows this weekend, leaving the field clear to opponents.

That would suggest a movement about to cash in its chips, but of course it has one ace-in-the-hole — the second amendment, and a Supreme Court determined to take the broadest possible interpretation of the “right to bear arms”. Several years ago it struck down a handgun ban in DC, and it has dealt the same way with a range of similar laws in several states.

Even a law passed with thunderous acclaim in both houses could be thrown out by the court. That would leave things as they are — there are currently 10 gun control bills held up in the Senate — and waiting for the next massacre. That would put the country into a cultural-political crisis that might begin to suggest the most audacious possible move yet — a campaign to modify the second amendment (repeal is beyond the realm even of political stunts).

There is no doubt that something has changed with this massacre, for obvious, if irrational reasons. This was the first large-scale primary school massacre in the US by a young person (rather than a disgruntled teacher), and the pull of guilt at a society’s failure to protect its own children has become a powerful force against the homilies of the gun lobby. There was a similar sort of feeling at the time of the Columbine massacre, but less strong, even though the prospect of a teenager facing a violent and immediate death — with the full knowledge of imminent extinction and a life missed out on — seems equally horrific.

To continue the old “guns don’t kill people, people do” shtick in the wake of all this, now seems not clever or persuasive, but obscene and obtuse. Subsequent events seemed to confirm that society was, in this respect, spinning out of control; on Sunday, a morning church service in Newtown’s St Rose of Lima church had to be abandoned when bomb and gun threats were phoned in. The Huffington Post is now running a whole series of reports on individual murders here and there, to show the absolute carnage in a country, where nowadays you have to hit double figures to make an impact.

“The funerals will continue at Sandy Hook into — well, into Christmas. The new fight against a gun culture of symbolism and psychopathy has begun.”

It was inevitable that someone would come out in favour of guns in the wake of the tragedy, and in the US that was Texas Republican Louie Gohmert, who suggested that the massacre would have been stopped in its tracks if the head teacher had had an M4 with which she could have “taken the shooter’s head off”.

In Australia, commentator Tim Blair echoed the call: “The first thing people do when some maniac begins firing a gun is to call for help from other people who carry guns. Just a thought, but it might be more efficient if those closer to the scene carried guns in the first place.”

The logic that the number of gun deaths in the US is going down, as the number of guns rises, has become part of the argument for “concealed carry” laws, which allow people to carry concealed weapons. In some limited circumstances these reduce crime. But gun murder has also fallen in areas where no such laws exist, as part of a general fall in overall crime.

Indeed a lot of the arguments that “there is nothing to see here” are spurious. It’s argued that the number of massacres hasn’t gone up since the ’20s. But in the ’20s many of these massacres were “rational crime” — they were either large family or clan feuds, gangsterism or the like. Much of this stuff now goes unreported. What passed for a massacre in the 20s, is Saturday night in Philadelphia now.

What has come out of the blue are stranger and semi-stranger massacres, which were almost unknown before World War II. Since Charles Starkweather, the killing of whole classes of people simply because they are co-workers, McDonald’s patrons or school students has gone through the roof. In their rush to defend guns, the gun lobby ignore this important shift.

The public doesn’t. They know that it is not merely the death but the meaning of it that matters, and the terror that goes with it. Newtown is so dominating, so unarguable because not the slightest rationality or purpose attaches to the crime, and hence to the deaths. It is a rip in the fabric of the universe, and most people — Americans included — don’t want to live in a world where that is as expectable as a car crash. The reality of Newtown is that the primary school has ceased to be a safe place in the everyday imagination. One massacre impacts tens of millions. The answer that more people should be armed simply takes society further in the direction of atomised war of all against all, that people are coming to stand up against. The Right don’t get it, because guns are a fantasy object for them. They render everyone less safe and less free, but they give the illusion of a pre-modern free society.

The funerals will continue at Sandy Hook into — well, into Christmas. The new fight against a gun culture of symbolism and psychopathy has begun. It will go well beyond the last interment, but it will be won.

There was never any doubt that it would take something special to create a pivot point for the US gun debate. I always thought it would be, say, three massacres in one week, double-figures jobs tripping off one on top of each other, the next one starting before the last had cleared. A change in the quality of the debate would come about from a change in quantity, the sheer number of dead. But in the end it was the reverse. It took a killing so atrocious, so nihilistic in character to open the floodgates of protest.

“Guns don’t kill people, people do”, guns just make it so much easier….

The answer could lie in the NRA’s name alone, National “Rifle” Association. Rifles, not assault weapons.

Well done Guy. A fine piece of sanity and realism amidst the chaos.
The idea that traditional American “gun culture” might have actually reached its high water mark, is a stunning thought.
But what an appalling horror was required to get there.
Fingers crossed that the tide has truly turned.

Guy, always loved your work, and the articles over the last two days make me respect it more.

The sheer lunacy over the guns laws in America defies definition.

The fact that so many of its citizens are terrified and paranoid about either the government or the neighbours is alien to me. Can anyone cite any research about why so many in the US feel the need to own assault rifles?

Phil L – I think you answered your own question, “Paranoid”. Get “him” before “he” gets me. Whoever Him and He may be.