Margaret Simons responds to articles in The Australian today criticising her reporting of the Cameron Stewart/Simon Artz affair in Crikey. And other juicy media tidbits.

View from inside an Australian hatchet job. If you take last May’s efforts and today’s crop of stories in The Australian together I now rival Robert Manne in terms of words devoted to attacking me. For those that haven’t seen today’s paper, I’ve been attacked in an editorial, news story, accompanying infographic and the Cut and Paste column over my coverage of the paper’s reporting of Victorian policing issues. Criticising The Australian comes at a price.

I hope people will not lose sight of the fact that the important underlying issue is the impact of media campaigning on police politics. That is much more important than anything I have said or done.

Following the questions from The Australian and my response reported in yesterday’s Crikey, I received some follow-up questions from The Oz’s John Ferguson. Their tone and high emotion speak for themselves, and put the material in today’s newspaper into context …

For the record, the allegations of inaccuracy made against me are untrue. When it first emerged, initially before the  Federal Court in action initiated by The Australian, that Stewart was the main witness against his source, Simon Artz, I reported that fact, together with the ethical issues that raised. When it emerged some time later that Artz had signed a release, I reported that too, together with the questions it raised.

When the MEAA expressed the opinion that Stewart had done no wrong, I reported that too – and said that the rights and wrongs of the case would form material for journalism ethics courses well into the future. Which is true, as is evident from Stewart’s own account, published on the weekend. — Margaret Simons (read the full story here)

Byline blues at Herald Sun. Avid readers of the Saturday editions of the Herald Sun and sister tabloid the Daily Telegraph were left shaking their heads when an identical story sourced from Alan Kohler’s Eureka Report appeared under two different bylines — one right and one wrong. The analysis piece, by promising Eureka journo Caleb Samson, erroneously appeared in the Hez with Tony Kaye’s dinkus and byline, while the Saturday Tele‘s crack subs team got it 100% right. Samson confirmed to Crikey this morning he, not Kaye, was the actual author of the holiday season franking expose.

AFR embraces holiday spirit. It’s that time of year again when Crikey calculates how many days it has to digest “bumper” editions of the Australian Financial Review before getting topped up with new news. Today the paper revealed that Thursday’s edition would be last regular copy before a “series of bumpers” rolls out over the festive season.

We’ve looked at the calendar and can only conclude that whatever is filed on Thursday night will have to suffice until the 29th, with another bumper due on the 3rd or 4th of January. While the paper slumbers, we’ll have to rely on Chris Mitchell’s reliable Australian to report on the nation’s shortcomings, which will, as always, be publishing right throughout the break (Crikey will be on holidays from the 25th to the 6th, returning on the 7th). 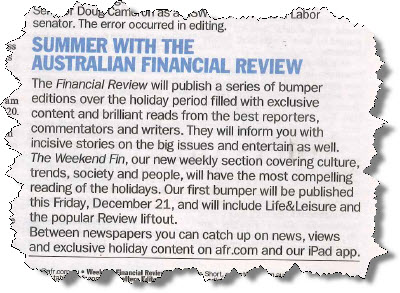 Media release of the day. This landed in our inbox today from the Australian Psychics Association. We wonder if Debbie saw this one coming? 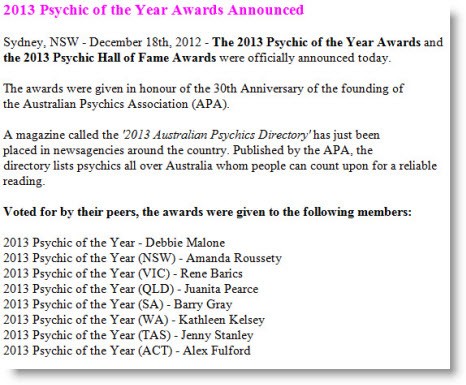 Front page of the day. The New York Post covers what could be a landmark moment for gun reform in the US. 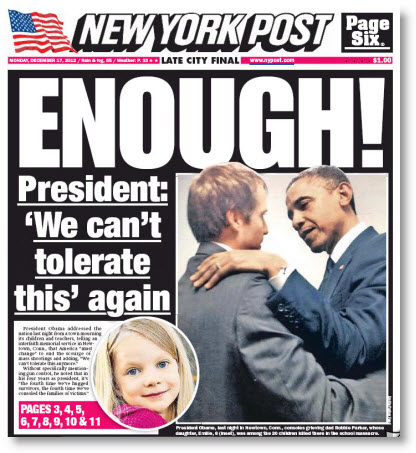