The waste in Tasmania’s forests: most timber left to rot

Most of the trees felled in Tasmania's forests end up as waste and woodchips. Andrew Macintosh and Richard Denniss crunch the numbers in a new Australia Institute infographic.

In debates about native forestry, it’s common for the industry to claim its activities are sawlog-driven and carbon neutral. But as this infographic shows, a hard look at the data shows that most of the biomass affected by harvest operations is left to rot (or burn) on the forest floor, or ends up as woodchips and processing waste … 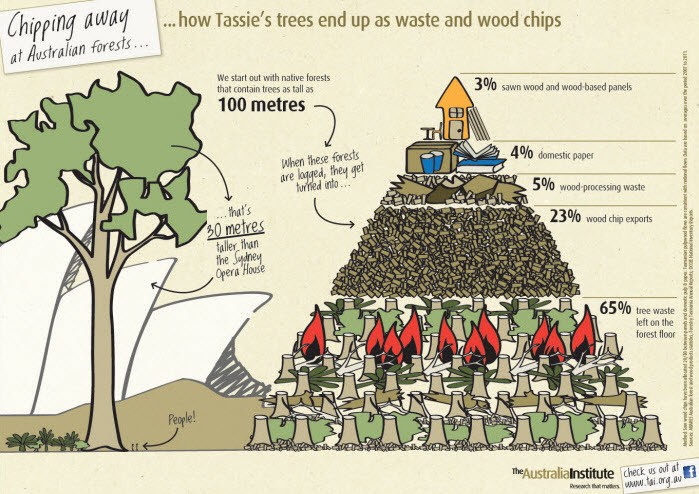 In fact, on average, every 100 tonnes of trees that are felled make three tonnes of sawn wood and wood-based panels. A further four tonnes out of the 100 becomes domestic paper products, and 23 tonnes are exported as woodchips. The remaining 70 tonnes is waste: 65 tonnes in every 100 is left on the forest floor as harvest residues (harvest slash) and five tonnes becomes wood processing waste that is burnt for energy or turned into mulch.

Contrary to the claims of the industry, the main “product” from native forestry is waste. This is one of the reasons why state forestry agencies struggle to make a profit from a resource they don’t pay for.

Other reasons for the demise of the native forest sector include the high Australian dollar, subdued international woodchip prices and a shift in consumer preferences away from native forest products. Ironically though, the final nail in the industry’s coffin could come from the valuable carbon credits that could be generated by not harvesting native forests. While it has been spoken about for decades, the day has come where native forests are more valuable standing up than chopped down.

Indeed, we recently claimed the latest deal to protect Tasmania’s forests will deliver the Commonwealth government around 7.4-8.2 million forest management credits per annum over the next 20 years, which are likely to be worth between $6-$7 billion in current dollars. In exchange, Tasmania is being offered $378 million to compensate forestry workers and help prop the industry up for another few years. It’s worth noting that Tasmania’s upper house yesterday delayed the implementation of the forests peace deal, sending the bill to a committee.

In recent days, Malaysian forestry company Ta Ann has threatened to shut down its existing mills if the forest deal is not endorsed by Tasmania’s upper house. This adds a twist to the story. With Ta Ann gone, and the Triabunna woodchip mill closed, the native forestry industry is likely to collapse, leading to the cessation of harvesting in public native forests. This would lead to the Commonwealth getting a further 6.1-6.7 million forest management credits per annum over the next two decades.

Combined, ending harvesting in public native forests in Tasmania would result in the Commonwealth getting around 13.2-14.6 million forest management credits every year for the next 20 years. In total, these credits are likely to be worth $11-$12 billion in current dollars; or an average of $550-$611 million per annum.

By propping up the forestry industry and ensuring continued harvesting in native forests, the Tasmanian Forest Agreement could end up costing both the Australian and Tasmanian governments billions in foregone carbon revenues.

The infographic helps explain how his could be the case. With only 3% of the biomass affected by harvest events being converted into long-lived wood products, most of the remainder is waste and much of the carbon in that waste ends up in the atmosphere.

Tasmania’s forestry sector akin to ‘work for the dole’

There are a few things to note: The tops ( crowns) are left in the forest as habitat, seed stock and fertiliser – there is no benifit to removing and processing them and the forest regrows better when they are left. Only southern Eucalypt species are chipped for pulp/paper etc – the northern species eg Qld – are not chipped as they do not contain the apropriate starches to be made into paper.
recovery of board from saw log is small – always has been – you are lucky to get more than 30%. That big “wood chip exports” component -do you think that whoever it gets sent to at great expense might actually make something useful out of it? – Probably. There has been a strong campaign by elements of the greens to shut down native forest harvesting across Australia. Our forest industry is world leading in sustainablity and environmental impact minimalisation but much of it has been shut down at the behest of the green movement. Now we have a situation where all that timber that was sustainably produces locally for our domestic market has been replaced with timber that is torn from the rainforests of SE Asia with much less concern for communities, susatinability and the environment. Hows that for good green global policy? Also – a fact that most lay people are unaware of – there are no hardwood plantations currently being cultivated in queensland – where I come from – or northern NSW that will ever produce a saw log – they are all for chip and the mainstay of the northern Aust hardwood industry – Spotted Gum – cant be grown in plantation. The nasty reality is that in ther efforts to preserve Aust forests the greens have put further pressure on the worlds rainforests and australia has lost a large part of a sustainable, viable decentralised rural industry and articles like this make people think that is a good thing.

This is pretty much nonsense. Do we tell gold mines that they’re 99.99999% waste? Unless you want to grow perfectly square trees (without branches or leaves) it’s pretty obvious that a plank of wood is only going to be a small part of a tree.

Also, complaining about this is desperately hypocritical since greens have worked very hard to ban the use of harvesting residues for power generation.

As the authors would know, houses that aren’t built out of timber are built out of steel, concrete, aluminium and glass. So their professed concern for carbon credits is very limited, they don’t actually give a rats arse about emissions.

Sustainability is a very simple concept.

If you didn’t plant it you can’t harvest it.

The really, utterly, mindblowingly stupid thing about harvesting 500 or 1000 year old trees for disposable wood pulp is that we can grow plenty of fibre species that will produce similar amounts of better product in just a decade or two…

Are Australians this mindblowingly stupid by nature or nurture?

Lies, damn lies and statistics.
The article states what most of us already know – there IS waste with ALL extractive industries! The more you “process” something, the more waste / by-product you create.
So what are the good folk of Tasmania going to do when the forests and downstream industries are all closed? Regrettably there are not enough of us paying homage to MONA for them all to be pouring lattes in Hobart!!
The solution – as always – is balance and ensuring that the extractive industries are held to account, while not strangling their existence by threatening to stop fibre supply.

Moloch,
If you have a natural resource that re-grows at, on average, about 5m3 per hectare per annum in an estate of over 1000 square kilometres and you harvest less than 2% of that resource at less than 1m3 per hectare per annum, I think that could be easily defined as sustainable. That is the actual case in central Qld.
It would be many years since a 500year old tree was harvested in Qld. I have had little direct involvement in the forest industry outside Qld but have always tried to keep well informed. Many years ago large old trees were routinely harvested, much less so now as most of them are designated as habitat trees and are thus protected. The loggers cant even fell a tree marked for harvest if it cant be done without impacting the habitat tree. There is also a limit to the size log that can be processed There are very few sawmills capable of processing logs with a diameter greater than 2.1m and that is too big for most.
Loggers dont choose the trees either, trees for harvest in state forests in Qld Vic and NSW are marked for harvest by the dept of forestry under strict guidelines to minimise dammage during extractioin, dislocation of fauna and erosion.
Also – as a sideline – did you know that in the eaarly 1960’s there was a fairly large area in southern WA planted with Karri – a plantation on private land – and the greens are or were recently trying to prevent its harvest.I dont know the outcome. Doesnt help their cause really.
As I said in my previous post, we have shut down a sustainable and viable industry in Australia and replaced the resources that came from it by increasing the unsustainable harvest from SE Asian rainforests.
Bear this in mind too, much much more land has been cleared for farming than for logging worldwide – not just in Australia. Foresters tends not to clear land – they take the good trees, leave the young ones to grow and ignore the gnarly old ones as they are too hard to process and recovery rates from them are low. I have been associated with timber mills that have sustainably harvested all their logs within a 60-70k radius of the mill for almost a century and are still going strong.