The term "mummy bloggers" -- much in the news of late -- is patronising and sexist, and should be consigned to the rubbish bin. 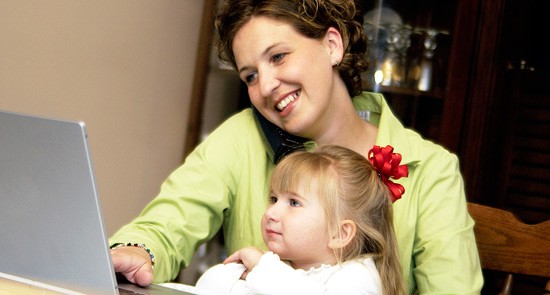 We were reminded of this recently when the Prime Minister hosted a bunch of them to drinks this week. Similarly, there are doctors and “doctors’ wives”. It is very important that poor unsuspecting readers and voters (and possibly medical patients) know the difference, especially if they are men. Otherwise they run the very real risk of taking the content of such blogs seriously or, in the case of the doctors’ wives, the opinions of such citizens on their merits.

If that happened they’d get infected with what the boys in my primary school playground used to call girl germs, and their p-nises (which is where men keep their brains apparently) would fall off.

To avert such a national catastrophe, sensible non-mummy commentators have been outing such girl-germ-carriers at every opportunity. There may even be a case for Nicola Roxon to pass legislation forcing mummy bloggers and doctors’ wives to be sold in plain packaging with graphic warnings about what can happen to unsuspecting men who get contaminated.

You see, and this may shock you, these mummy bloggers write about their lives, and some of them attempt to make a little pin money doing so. Some people, usually other women, find what they have to say helpful and occasionally even amusing. Which is really weird because, as we all know, women have no sense of humour.

Some female bloggers are not called mummy bloggers (just like some wives are not called doctors’ wives) because they don’t write about icky, girly things like bearing and bringing up children. They write about really super important things like budget surpluses and the latest poll results and whether Warney should be pre-selected for the Aussie cricket team even though he is 43.

They may or may not be mothers but — as all decent writers should — they keep such irrelevant private nonsense to themselves. No one wants to stop the mummy bloggers from writing their fluffy little columns, it’s simply that the rest of us need to be warned on approach. After all, there’s no bloody point having a ghetto — even a pink one — if you don’t let people know that its there.

Oh, and also come up with ways of keeping the people who are in the ghetto inside it. Some have suggested walls and barbed wire, but so far name-calling seems to be doing the trick.

The wives who are not called “doctors’ wives” may or may not be married to doctors (just like the doctors’ wives who are called “doctors wives”, confusingly) but they are those good women who vote for the Liberal Party like their husbands and believe in turning back the boats and that marriage should only be something that those with p-nises can do with those without them.

What is really causing concern amongst the self-appointed guardians of our media’s public health is that some of these mummy bloggers are starting to make some serious money. They are attracting women whose entire purpose in life, as anyone in advertising can tell you, is to shop. This used to work beautifully when the money women spent shopping went to the men who owned the shops and ran the factories that made the stuff mummy shoppers bought, but that’s not how it seems to be working any more.

Now these damned mummy bloggers are making some of that money and that’s just not right. Some of the men who used to make all the money out of mummy shoppers are feeling the pinch.

DISCLAIMER: The author would like to make clear that this is meant to be a satirical piece and not to be taken literally. The views expressed are not actually those of the author, who believes that the term mummy bloggers is patronising, derogatory and s-xist (with a dash of misogyny thrown in for extra flavor). She believes bloggers should be described in non-gender specific ways like poet, cop, scientist, writer, author, nurse and teacher and that when we do otherwise, we categorise and diminish their work as we do when we talk of female poets, lady cops, female scientists, woman writers (or worse women’s writer) and male nurses.

She also does not really believe men keep their brains between their legs. Well, not all of them, anyway.

Heavens to Betsy, we will have Granny Bloggers if we aren’t careful. Whereas if a grandfather was a blogger; what would he be called? A Gramp blogger?

OTOH, writing about female issues should, OTW, be confined to women’s magazines, the back pages of the MSM, and their own personal blogs.

The fact that the nation’s media and popular culture hasn’t classified an online group as “Daddy Bloggers” is discrimination of the highest order.
I demand that this group be recognised by the media as an influential minority group so that they too can get invited to drinks by the PM. Then I can bitch about it in left wing media, saying the term “Daddy blogger” is sexist and patronising (even though it might be one way of differentiating these bloggers from the mass of other bloggers out there and be the point of difference that drives people to their sites, increasing their influence)

Mummies are from Egypt. Mommies are child-care givers.

Apropos: On Ladyblogs, by n+1 magazine from earlier in the year:
http://nplusonemag.com/on-ladyblogs

The last sentence says it all for me…for all the denial of not being patronising, derogatory and s-xist in the disclaimer, the author tops it off with exactly the opposite.

“She also does not really believe men keep their brains between their legs. Well, not all of them, anyway.”

The guise of humour, just exposes the true stance of the author towards such qualities she wants us to think she has. “I don’t think all women writers are brainless, well, not all of them.” would certainly not make past the editing desk. Neither statement should be acceptable.