Michael Chaney faces a boardroom test this week from NAB shareholders. But the Big Four chairman (and Woodside Petroleum director) has an impressive career behind him building Wesfarmers into the corporate powerhouse it is today. He's a flag-bearer of propriety to those who know him.

It won’t end in tears — the institutions will play ball and re-elect “Mr Perfect” as chair — but for the first time in a long time there will be questions to answer for the man they call “St Michael” when the doors swing open at the People’s Bank AGM in Perth. Anything less than full confidence would represent a savage slapdown for the proud product of an overachieving WA family who famously transformed Wesfarmers from a rural services firm into a diversified sharemarket darling.

The numbers seem grim: since Chaney took over at NAB in 2005, the share price has fallen by a fifth; it now finds itself fourth out of the Big Four on market capitalisation.

Chaney, now 62, ranks at No. 31 on the Optimice Market Capitalisation Influence Index, overseeing a combined company value of $86 billion. He’s No. 9 on the MCII influence index, putting him one handshake away from a bulbous $1.05 trillion dollars in shareholder wealth (see a graphical representation of his ASX spider web below).

He boasts an impressive rap sheet — he’s the chair of two other boards: LNP giant Woodside Petroleum and private corporate advisory Gresham Partners — and is also a director of influential right-wing think tank the Centre for Independent Studies and chancellor of the University of Western Australia. And, for a decade, he was a director at BHP. By most accounts he’s the closest corporate Australia has to a leader, a flag-bearer of propriety among other business psychopaths.

The measured former petroleum geologist told The Power Index that if power equated to influence then “naturally if you’re on a larger board you have more influence over larger issues. Certainly the chair is more involved and is more influential than an influential director, just by the nature of the position.”

But it’s not just boardroom influence — ideas have always coursed through the Chaney household. He’s the son of Menzies government minister Sir Fred Chaney and the brother of former Liberal Party deputy leader Fred Chaney Jr (a WA senator and member for the federal seat of Pearce). Another brother, John, is a WA Supreme Court Judge.

Chaney chaired the Business Council of Australia between 2005 and 2007 and continues to serve on the board of the Centre for Independent Studies, a BHP-funded think tank that believes in, among other things, slashing company tax to 25% and ending “wasteful” social welfare. During the Howard years its scorched earth policies provided the ideological underpinning for WorkChoices.

The “independent” think tank, Chaney concurs, is “very influential behind the scenes in shaping policy in economics, indigenous affairs, in religion … the list goes on”.

Current Wesfarmers chair Bob Every (and #7 Power Index director), who inherited much of Chaney’s strategy when he joined the board in 2006, defends his colleague’s bona fides and says it’s pure nous that’s taken him to the pinnacle of success.

“Michael’s track record as a successful executive stands in his own right,” he said. “He’s incredibly commercial and can analyse complex problems and get to the core issue very quickly. He’s a smart guy, very commercially astute and has an enormous presence and influence on the people around him.”

But it’s his more recent record handling the semi-crisis at NAB, especially his endorsement of struggling CEO Cameron Clyne, that could lead to a grievous power failure. Current NAB non-executive director Patricia Cross, who also served on the Wesfarmers board when Chaney was CEO, attests to the fact it was Chaney himself who tried to return the focus to shareholder value.

“At NAB there’s never a dull moment … I think that he has made a special contribution in that, especially getting the bank to really live and breathe the shareholder focus. We all feel the lack of progress relative to our competitors in terms of total return. We’re very focused on it and Mike especially which has made a huge contribution … when we’ve had major issues before the board he is very calm and very accessible,” she said.

For his part, Chaney says the restructuring of NAB’s disastrous UK foray — blamed for much of its damaging writedowns — is something he is “pleased to put behind us … we’re getting that done now, albeit in a more difficult environment”.

But it’s not just NAB where the keen outdoorsman has been feeling the heat. Woodside (with a market cap of $28 billion) is smack bang in the middle of a bitter battle with Telstra director Geoffrey Cousins (who he labelled an “anarchist” early this year) and Bob Brown — along with a substantial proportion of the local indigenous community — over the company’s controversial gas plant at James Price Point.

Asked for his highlights over the last 12 months, Chaney points to the bedding down of new chief executive Peter Coleman at Woodside following the departure of Don “High Voltage” Voelte to Seven West (a company that, in its West Australian Newspaper days, could easily have become a part of the Wesfarmers empire if Chaney had elected to buy it).

The Australian Shareholders’ Association agrees his career needs to be viewed as two halves. He was “highly regarded in building Wesfarmers to be the hugely successful conglomerate”, CEO Vas Kolesnikoff says, but if the share price turns further south he may struggle to contain the fallout. “He doesn’t tolerate shareholder dissent well at all,” Kolesnikoff stated.

In 24 hours time we’ll know just how much this lion of Australian business — and The Power Index‘s third most powerful director — is willing to cop. 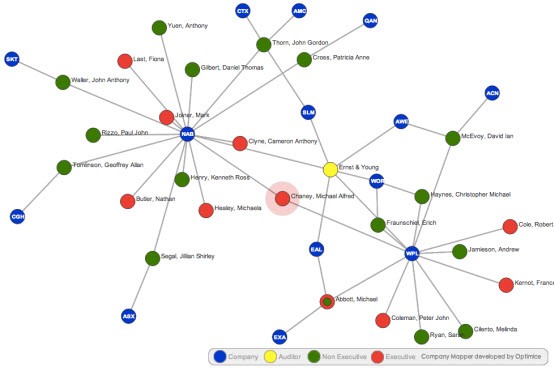 Mayne: how to get the Shell men off the Woodside board?