The Prime Minister invited editors of female-skewing websites to Christmas drinks at Kirribilli House. Women's Agenda editor Angela Priestley was happy to be part of the communications strategy.

The invitation was a little vague, not requesting my attendance as a “woman” or as a “blogger” or even as a “mummy”, but simply requesting the “pleasure of my company”. I had eight hours to RSVP and did so immediately before asking around to see which other media colleagues had been invited. It wasn’t long before I realised the group invited was a similar one to those who attended the PM’s morning tea with “mummy bloggers” back in June, with the exception of a few additions like me.

I’d become part of the PM’s strategy to get close to a number of women who collectively have a powerful voice online. Women-focused websites such as Women’s Agenda, The Hoopla, Mamamia, iVillage, Essential Baby, Kidspot and Daily Life attract a combined audience of more than 3.5 million people according to market researcher Nielsen (and including room for cross-over). Add to this the individual bloggers in the room such as Eden Riley, who can pull in thousands of women a month, and you have plenty of reason to bring in the caterers, order the champagne and schedule a little get-together on the lawns (and then in the lounge room, given the terrible weather in Sydney yesterday) of Kirribilli House.

Although when I asked the Prime Minister what the point of the exercise was, she didn’t concede as much. She told me it was a “nice thing to do” and that, having met many of the women earlier on in the year, she thought it’d be a good way to celebrate the Christmas period over a drink. She nodded when I discussed how social media’s become a powerful protesting tool for women and briefly mentioned the women’s vote in the President Obama’s successful campaign in the US, but didn’t appear willing to be drawn into how significant the so-called “gender card” will be in 2013.

The Prime Minister and her advisers mingled with the group of 25 or so that included as many experienced journalists and editors — like Anne Summers, Alex Brooks and Sarah Oakes — as it did experienced bloggers. Gillard moved from one person to another with glass of Champagne, deliberately ensuring she spoke to everybody in the room.

There were no questions off limits. We were not asked to leave phones, notepads or recording devices at the door. Most of the crowd stood, drink in one hand, smartphone in the other, using the opportunity to pose with the Prime Minister and take Instagram snaps of interiors of the historic house.

I didn’t hear anybody bring up the Prime Minister’s resignation from Slater & Gordon, nor the Craig Thomson or Peter Slipper affairs — although that could have occurred while I was out of earshot. However, I heard women use the opportunity to talk about other issues that matter to them: s-xism at work, getting ahead in their career, childcare and how having a female prime minister has changed the perspective among some young girls about what opportunities and careers they can pursue. 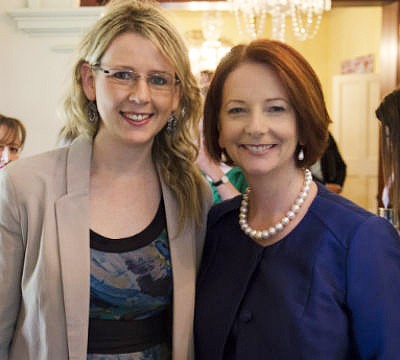 Plenty of lighter issues also entered the conversation: which social media tools the prime minister prefers (she asked how Pinterest works), what’s on the menu for Christmas lunch and holiday plans (Gillard will be spending the break with her mother in Adelaide). Some women brought a little something for the host — handmade crafts, a box of cherries, Christmas decorations and even a miniature reindeer named “Julia”. Some of the baked goods brought along were served up and passed around. It was a relaxed atmosphere (even the no-bullshit McTernan was labelled “the Edinburgh guy”) and had been orchestrated as such — I don’t believe I’ve ever been offered more Champagne top-ups within the space of an hour.

Following the event I was asked by some people, including a radio journalist, if I felt part of the “strategy”, and, cynically, if anyone had discussed policy during the drinks. That struck me as odd — particularly in a year like this when political journos and those in the press gallery appear to have spent more time discussing everything other than policies. I’m not sure if it’s because it was a roomful of women, or a bunch of people who work online rather than in print, that would leave some to think we wouldn’t still use the opportunity — however carefully planned by its organisers — to bring up issues that matter to the particular audiences we represent.

Gillard was engaging, warm and generous with her time. The traits were hardly surprising given she’s an experienced politician and knows how to work a crowd — but I never for a moment doubted being part of the strategy. I didn’t mind.

The fact politicians actually have a strategy that includes women with communities online should hardly be revolutionary, or even surprising. It shows they’re concerned about the block of voters we speak to on a daily basis, that they appreciate it’s a powerful force and one they’d be wise to pay attention to. Indeed, I hope I can also be part of Tony Abbott’s strategy for talking to women in the lead-up to the next federal election. I’d like to compare notes.

Good luck with the T Abutt thing.
Just as in the Romney campaign in the states, you will be considered part of the 47 percent who will not vote for him and as such he will pay someone else to make you “part of the strategy” while he chases the white elderly male vote.

Beers with howard, pickering, jones, blot and big business moneyed types will be his go, rather than wine or champers with the funny looking blokes who wear make up and don’t understand him.

Nicely done Angela. Although I somehow doubt that firstdog will ever forgive you for stealing her invitation.

To be fair @drmick, the Opposition No-bot is scheduled to address the Bugeran Dam CWA Knitting and Cake Decorating Circle.

By the way, as a progressing male, I try to steer clear of “female-skewing websites” (whatever they might be).

Did any of you lazy women demand to know why she is jailing women and babies for daring to seek refugee status or was the champagne too nice to be bothered with such thing.

No wonder I don’t like Australian women too much anymore, you are trivial dingbats.

Marilyn, always true to form. Perhaps one of the lazy, trivial dingbats you’re so quick to insult (jealous, much?) did demand an answer from the PM about asylum seekers. Angela clearly can’t report every conversation.

More to the point, have you asked the PM or are you content to use comment threads for that?