Butt out! The world’s first plain packaging laws for ciggies were supposed to take effect on Saturday — but did everyone comply? A mole from north of the border dobs in a rogue retailer:

“Local grocery store in western suburbs of Brisbane is still selling the s-xy, better tasting, branded packs — I just assumed because they were trying to finish old stock?! Doesn’t bother me …”.

We also heard this interesting rumour:

“Most retailers had plenty of excess stock come December 1 and manufacturers have taken the old packets back by courier to be destroyed this week. Word didn’t get around to some Coles stores in Melbourne however and thousands of dollars of cigarettes were taken by someone claiming to be a representative of the tobacco companies. The cigarettes were handed over with no questions.”

Looks like some enterprising person could have a lifetime supply of PJ’s. But is that rumour true? We put it to a spokesman for Coles, who said he had not heard of this heist, and the company had strict checks and balances in place. “We’d be very surprised if anything like that occurred,” he said. Seems like our mole might be getting creative there — but if you know more, please supply details! (And you can stay anonymous if you don’t want mum to know you smoke).

Tips looked into how the Ciggie Cops would police these new laws, and turns out it’s all down to bureaucrats to patrol the smokers’ corners. The Department of Health and Ageing and the National Measurement Institute (NMI) have formed a committee to follow enforcement, and they are in what they call the “initial period” of enforcement. Until February 28, the focus will be on educating those who breach the rules.

Outraged anti-smokers can report breaches on the department’s website (although wouldn’t it be more fun to tell Crikey’s Tips instead?). It’s not quite clear if retailers are allowed to sell their remaining brightly coloured packets of fags. Although the enforcement policy states that from December 1, “all tobacco products sold, offered for sale or otherwise supplied in Australia must be in plain packaging”. Health Minister Tanya Plibersek said she would allow non-compliant cigarettes to remain on the market until sold out.

Early starter. Well well — seems the Liberals might know something the rest of us don’t. A TV spy tells us this ad has been running for Greg Bickley, the Liberal candidate for the federal seat of Bendigo. Our tipster wants to know if the Libs have got the inside running on an early election date (expected in the second half of next year). “Are they really that cashed up they can afford to start running ads now in an electorate where Labor’s majority is 9.5%, albeit with sitting member and tweeter of the year Steve Gibbons retiring?” our tipster asked.

Tips rather enjoyed the ad and has decided to commemorate it with a Bickly drinking game: toss back a shot every time he says “local”. That bottle of whiskey on the Crikey editor’s desk will be empty in no time.

McKinsey much bigger than Abbott. Tony Abbott is off to Oxford University to reminisce about his Rhodes scholar days with the new generation. Just one question. Is he driving his truck there?

Good to know the folks at glamour consulting firm McKinsey & Co are sponsoring Abbott’s appearance (click on the email below to see a bigger version). We seem to recall previous Rhodes scholars talking about getting the hard sell/faux camaraderie from some big Australian consulting firms over the years. 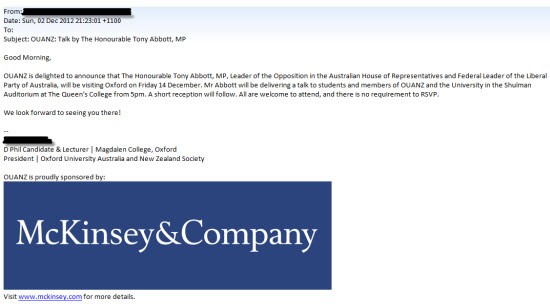 Xmas cheer. Crikey is unaccountably fascinated by other people’s staff Christmas parties and hampers. This time of year always brings back fond memories for this Tips scribe of moshing with a certain Tasmanian premier (and some sailors on shore leave) on the dance floor of Customs House at Salamanca, after some very festive Chrissy drinks in the parliamentary bar. It was a sad moment indeed when the premier’s chief of staff (who had unwisely gone home) raced in to haul off the premier.

So please bring out all your tales of Christmas parties — great, woeful and penny-pinching. Email us and get Crikey into the Christmas spirit.

Formatting probs with that click on link to the McKinsey’s email. Won’t enlarge.

I live in the Bendigo electorate. Bickley is obviously busy campaigning. There were flyers promoting his candidacy in a local service station. Also a local paper featured an article about Steve Gibbons’ tweets that was obviously based on a press release from Bickley.