Massive new marine reserves, but are they phoney?

The recent creation of massive marine reserves will barely help Australia's environment because of where they've been placed. Bob Pressey, an expert in coral reefs at James Cook University, takes a deeper look. “Australia’s precious marine environments have been permanently protected with the proclamation of the world’s biggest network of marine reserves.”

That’s how the federal government describes the recent creation of marine reserves covering 2.3 million square kilometres of ocean, a decision which made the news worldwide. But is it accurate?

What if the reserves were designed to minimise impact on commercial and recreational fishing and the oil and gas industries, and therefore minimise real protection for marine biodiversity? The government may be simply taking its policy of reserving also-ran, non-commercial tracts of land and applying it to the ocean.

For the casual observer, the map of Australia’s marine reserves might cause delight or alarm. People concerned about the future of marine biodiversity might feel the big new reserves will secure the future of species and ecosystems. Those interested in commercial or recreational fishing, or offshore oil and gas development, could be concerned about these reserves. But both reactions may be misplaced.

With the planet’s, and Australia’s, biodiversity in decline, protected areas — tracts of land or sea where extractive uses such as clearing, trawling, logging and long-lining are excluded or greatly reduced in impact — are crucial. But not all protected areas are as effective as they should be. On land, most are in the wrong places. They are “residual” in being concentrated in areas with the least promise for commercial land uses, to minimise financial and political costs.

This widespread tendency leaves those species and ecosystems most exposed to past and impending threats to languish outside reserves while formal “protection” is given to areas that were de facto protected by lack of suitability for commercial uses. The government is now repeating this pattern of residual reservation in Australia’s very extensive marine waters. It becomes apparent looking at the map: Zones show activities that are allowed or prohibited. Look at the green zones — these are categorised under the World Conservation Union’s system as “Ia” or “II”, providing the most complete protection. The green zones prohibit fishing of any kind and exploration or development for mining.

But the locations suggest their effectiveness for biodiversity conservation might be limited. They have mostly been placed as far as possible from shore, so are concentrated at the outer edges of Australia’s marine jurisdiction. Our more detailed analyses confirm four things about the green zones:

The other zones (yellow and blue zones) generally offer much less protection for marine biodiversity. Although most of these other zones prohibit the use of bottom gear, including demersal trawling, it is unclear to what extent this gear was being used in these areas beforehand. In the bulk of Australian waters outside marine reserves, protection for marine biodiversity is minimal.

The newly announced reserves therefore don’t greatly diminish the threats to Australia’s marine biodiversity that come from fishing. The impacts of fishing include direct take of species of concern and the consequent major reduction in all life stages in their populations, habitat modification from bottom trawling, bycatch from longlining, trawling and other netting methods such as gillnetting and purse-seining.

Bycatch includes turtles, dugongs, sharks and other fish, and invertebrates. Some of these are of national and international conservation concern. Bycatch rates are typically high. The northern prawn fishery is perhaps an extreme example. This fishery targets nine commercial species, but is known to catch 788 species, of which about 650 are thrown back dead.

The reserves have no effect at all on exploration and development of marine reserves of oil and gas. The activities related to oil and gas include seabed structures, acoustic surveys, drilling, greatly increased movements of ships, coastal infrastructure, dredging and disposal of dredge spoil. The impacts on marine biodiversity, including ship strikes on large mammals and turtles, and risks from accidents and spills, are poorly understood.

Even the dramatic Montara oil spill of August 2009 off the north-west coast faded from media attention when the surface slick was dispersed, while scientists can only speculate on its effects on species in the water column and on the seabed where traces of oil and dispersants were found up to 70 kilometres from the well head.

The overall conclusion is that the new marine reserves, and the ones established in 2007, have little effect on business as usual. Indeed, this was a major goal of the planning exercise. The media release indicates that “the new marine reserves have been designed in a way to minimise impacts on industry and recreational users”.

It’s worth asking then what Australia’s marine biodiversity is being protected from. The most comprehensive “protection” in this new process, in the green zones, has been given to areas that least needed protection.Nationally, and in most Australian marine regions, the conservation gains, despite the very extensive new reserves, have been small. One notable exception is the Coral Sea where the very large, if far offshore, green zone has been combined with large areas of IUCN category IV zones that prohibit the most destructive fishing methods. This combination makes the Coral Sea, for many species, a vast and secure marine wilderness — at least while the zonings stand.

Other important questions remain unanswered. In 1998, the government committed to creating a National Representative System of Marine Protected Areas by 2012. Is this what the government meant? The media release seems to indicate that it is.

An obvious problem is that the network is not representative, even at the coarsest level of provincial bioregions. At finer levels of definition, many elements of marine biodiversity will have fallen through the gaps or occur only in the partial and inadequate protection of multiple-use zones. So what are the prospects for these unprotected features still subject to the effects of fishing and exploration and development for oil and gas?

Another key question is why the government chose not to build on the world-leading foundation of the 2004 rezoning of the Great Barrier Reef Marine Park. The exercise defined explicit, quantitative objectives for each of its 70 finely subdivided marine bioregions, in keeping with world’s best practice in systematic conservation planning, a field of research pioneered in Australia. The process of designing the 2012 marine reserves was a significant step backward from 2004, avoiding quantitative objectives, perhaps to allow maximum scope to work around commercial interests.

A final question concerns the value of the government’s meeting the 2012 deadline of “completing” the marine reserve network. Getting it wrong in 2012 means that the species and ecosystems most vulnerable to fishing and extraction of oil and gas remain vulnerable. Putting the green zones as far from shore as possible will significantly increase their management costs. And getting it wrong with more than a third of Commonwealth waters in some form of marine protected area means that prolonged and fierce resistance awaits any attempts to add marine reserves that are actually effective.

Forgetting about an arbitrary, politically motivated deadline and waiting several more years to get it right would have been a better investment in the future of Australia’s marine environment.

* Bob Pressey is a distinguished professor with the Australian Research Council Centre of Excellence for Coral Reef Studies, and is based at James Cook University 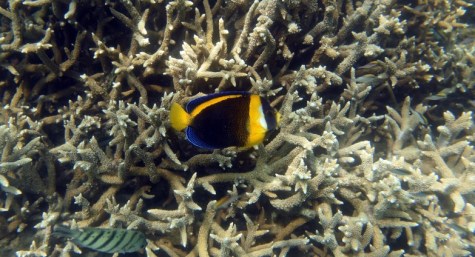 Can you protect the environment while drilling for oil and gas?

Interesting analysis, so what’s the strategy for fixing it Prof? Just waiting till later or taking more time is no guarantee the political situation will be any more favourable, and its not more time that’s needed, as you point out we have the information now, its political will. What’s your answer?

The timing of this relatively meaningless declaration of marine reserves, was blatantly to offset the shit-storm that was developing re new mining ports inside of the reef in Qld.

Allowing the de-classification of the reef (a ‘wonder’ of the world) is the proof of the sincerity.

This is govt. sanctioned three-card-trick is wilfully, ecologically culpable and the “Marine Reserve” initiatives move is insultingly patronising.

Surely everyone saw this coming!?

Er, no. They can actually go and gather relevant data, analyse it, and draw conclusions as to whether there have been any. That’s generally how science works. It seems that Pressey could equally have written ‘There is no evidence of any effects on species’.

I understood that this was meant to be a system representative of all major marine ecosystems (at least those that exist in Commonwealth waters). The lack of biodiversity data for these offshore areas is truly striking compared to areas like the Great Barrier Reef which has had hundred of millions of dollars of research and monitoring over the past thirty years. This system is clearly going to be inadequate on that comparison but it does appear to meet the representativeness criterion. With the current (improving and reasonably well managed) state of Australia’s offshore fisheries, I don’t really understand why the relatively low impact on commercial or recreational fisheries should be used as a measure of biodiversity conservation effectiveness. Perhaps some of the funding that goes to the reef (which we are told is doomed anyway) should be redirected to these offshore areas.

MarkDuffer – is there any topic on which you do NOT ooze rabble soothing bromides? Nukes, fossil fuels,probablky a big fan of GM, insecticides & Agent Orange too…?