It was the politics of Canberra, not the policy, which dominated media headlines, talkback radio and social media chatter this week.

Plenty of opposition members moving up our chart this week, which reflects the change in conversation from the government getting oxygen on policy to the opposition’s recent pursuit of Prime Minister Julia Gillard on the union slush fund.

When the PM did find space outside of rebuttals, she promised cuts of another sort, to our power bills, but in the cold (air-conditioned) light of day they will be nigh on impossible to deliver. Her pledge of a level playing field for Australian manufacturers may hold more sway, but will come at a price.

Kevin Rudd rounds the turn to Christmas nearer to where he began, moving up the list in support of Gillard on the union scandal, for criticising Queensland Premier Campbell Newman on public service cuts and commenting on the UN decision to give Palestine observer status.

In with a bullet is Health Minister Tanya Plibersek, whose plain packaging legislation actually got a run in the press, and Labor elder John Faulkner railing against party factionalism. 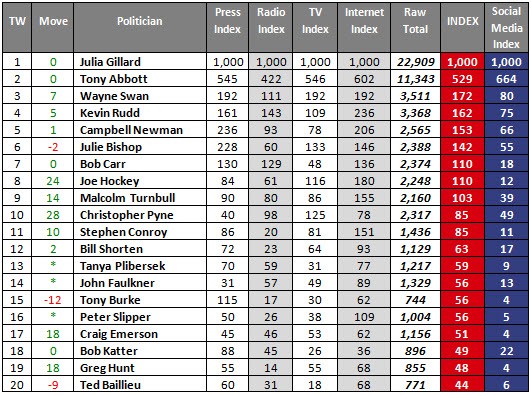 Talkback radio continued its focus on the Australian Workers Union slush fund and discussed the way Gillard and Abbott talk to each other, bringing s-xism back into the fray.

Punter gave it his all but gave it all away at the WACA.

AWU commentator at The Oz forgets to note his Liberal past