News Corporation has finalised its corporate restructure. In an internal memo obtained by Crikey, chairman and CEO Rupert Murdoch pays tribute to staff he says "amaze and inspire me". Plus other media news of the day.

Murdoch on News split: internal memo. News Corporation has finalised its corporate restructure. In an internal memo obtained by Crikey, chairman and CEO Rupert Murdoch pays tribute to staff he says “amaze and inspire me”:

I have great news to report regarding the proposed separation of our company into two global leaders.

In keeping with our rich, 60-year heritage of bringing news to the world, the publishing entity will retain the name News Corporation. The media and entertainment company, which has excelled at engaging, entertaining and enlightening people around the globe for almost three decades, will be named Fox Group.

In addition to announcing the names of the two entities, we are taking an important step in advancing this separation process today by announcing several additional details. We have appointed Robert Thomson as Chief Executive Officer of the proposed publishing company. Robert, who has served as Editor-in-Chief of Dow Jones and Managing Editor of The Wall Street Journal, is a true visionary, as proven by his outstanding leadership at the Journal, which has become the dominant newspaper in the U.S. and has greatly expanded its global reach through WSJ.com, which now publishes in eight languages. Read more …

The hardest book to buy. Crikey has reported on the launch of Gina Rinehart’s new book Northern Australia and Then Some: Changes We Need to Make to Make Our Country Rich. But we were unable to get an actual copy. Readers were having the same problem. “Does the book actually exist? I’ve Googled it and no bookstore, online or physical, sells it,” says one. So we made our mission to find it.

The reason, we now know, it can’t be found is because it’s not actually being sold in any bookstores or online. After calling the distribution company, the Institute of Public Affairs, Crikey were told the book could only be ordered through them as that is “the direction they have chosen to take”.

Crikey wanted multiple copies (we have a lot of eager friends) but unfortunately the IPA couldn’t grant our wish as the copies had apparently sold out. We tried a bar in Perth (where one of Rinehart’s launches took place) before sources put us onto the Pastoralists & Grazier’s Association of WA, which had 40 copies of the very exclusive book to sell. Now ten copies are in the mail — we’ll let you know when they arrive. — Crikey intern Rose Moloney

V8 TV rights talk with ratings down. The V8 Supercar season finished in Sydney on Sunday, ending the traditional Ford v Holden rivalry as we know it (Nissan and Mercedes have been allowed in next year). According to Steve Allen of Fusion Strategy, there was a 6-7% rise in average audiences across the year to just over 427,000, bolstered by the Bathurst 1000 which remains the year’s biggest puller. The audience average for this year was down on 2009 (545,000 average). Since then we’ve seen the advent of the 10 free-to-air digital channels, used by Seven (7mate) to show some races. Indeed, Allen described the high 2009 audience figures as an “aberration”.

Allen reckons the Gold Coast round is now a serious event, but the events offshore (NZ and in the Middle East) are not producing much. The switching of coverage from Seven’s main channel to 7mate seems not to have had much of an impact, except on some viewers who feel it’s their right that Seven disrupt the AFL for the V8s. Nine and Ten are claiming that won’t be a concern for them if they win the rights next year — negotiations are still taking place; Seven has first right of refusal — although for Nine it will clash with its Sunday afternoon NRL match at 4pm.

Allen says changes to the management of the sport give it “a legitimacy it possibly did not have previously”. That’s seen Sports and Entertainment sell its 25% stake and private equity group Archer Capital buying 60% via its racing team partners. And there’s a new CEO in David Malone, former head of Premier Media Group (Fox Sports), and a new chairman in James Strong (who is a mad bike rider). — Glenn Dyer

Video of the day. As Crikey reported yesterday, retiring ABC correspondent Peter Cave put noses out of joint at the Walkley Awards on Friday with a speech damning the awards process. Here’s the full spray (and around the 13.20 mark, as the credits roll on the SBS broadcast, there’s our First Dog collecting Crikey‘s first Walkley — we’re lodging a protest about not being included in the telecast proper): 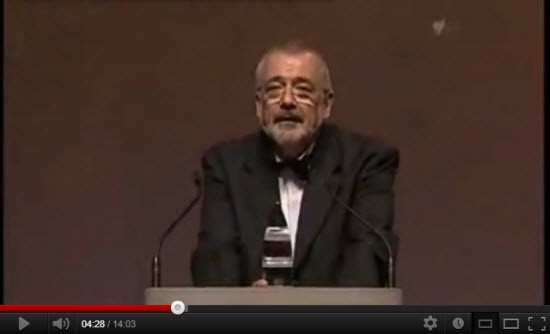 Front page of the day. Royal babies are less about heirs and more about the grace of Fleet Street in covering it. The Sun is especially chuffed about the bun in Kate’s oven … 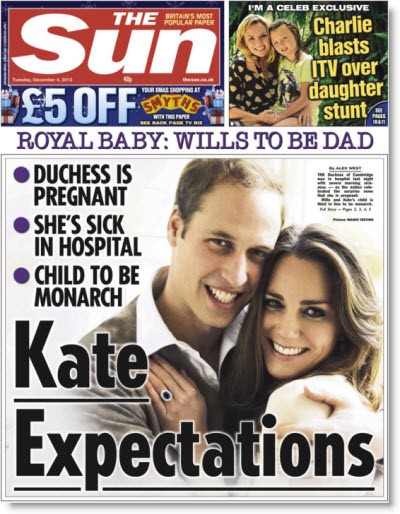 I fancied a read of this book to find out how I could improve my situation and enrich myself and my country. So I tried a search for Ms Rinehart’s book on the National Library’s catalogue, where all Australian publications are required to be lodged for the presentation of the nation’s literary history. I even checked with the State Library of WA, on the basis that WA is where Ms Rinehart’s major companies operate.

Not a reference to be found, so far …

I do hope that when Crikey has finished reading this tome, you will donate one of your ten copies to the National Library so that future generations can see how well we have benefited from Ms Rinehart’s suggestions?