A designer has lost a legal battle over claims a swimwear giant had stolen her designs. Be careful what you say on Facebook, reports SmartCompany editor Cara Waters.

Do these bikinis look the same to you? 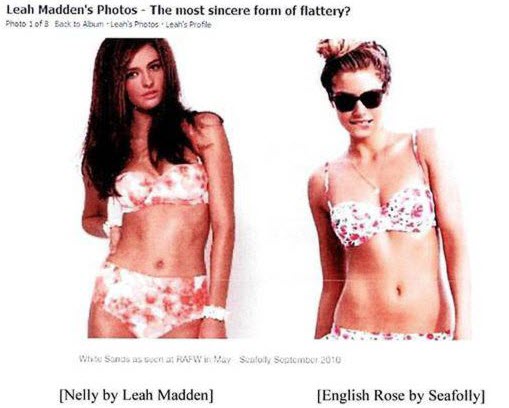 Not according to one judge, who has dismissed a legal claim by an Australian designer against swimwear giant Seafolly, ruling she falsely claimed on Facebook the designs were stolen. Leah Madden, designer of White Sands Swimwear, now has to pay Seafolly $25,000 in damages.

Madden posted pictures under the heading “The most sincere form of flattery?” containing photos of models wearing Seafolly bikinis alongside photographs of models wearing White Sands bikinis. She then posted comments — one said: “Seriously, almost an entire line-line ripoff of my Shipwrecked collection” — and emailed the Facebook page to a range of media organisations.

Seafolly immediately issued a press release describing Madden’s Facebook claims as “completely false and without foundation” and “made maliciously to injure Seafolly”. The swimwear giant said many of the designs Madden claimed it had copied were released into the marketplace by Seafolly before White Sands released its bikinis.

The legal brawl then escalated when Madden counter-sued Seafolly for defamation on the basis it had claimed she wanted to maliciously injure the business. But on Friday the Federal Court found Madden’s claims were misleading and deceptive.

Justice Tracey said Seafolly didn’t copy White Sands’ bikinis and the Seafolly bikinis were original designs created by employees of Seafolly and created without reference to the White Sands bikinis. Madden should have investigated whether the bikinis were copied before making her claims, he said:

“Before posting her views she failed to take a number of steps which would have elicited facts inconsistent with the notion that any copying of her garments had occurred. She could, for example, have made enquiries of retailers to establish when the Seafolly garments were placed on the market. She could have attended a retail outlet and examined some, at least, of the Seafolly garments.”

Richard Hoad, partner at law firm Clayton Utz, told Crikey the court was fairly critical of Madden’s conduct: “It shows you the danger of making a posting on Facebook and making allegations in the heat of the moment when you have not done the research to back it up.

“People still treat emails and Facebook posting as a less serious communication forum than a statement you might make in a press release or a more public forum but it has the same legal effect.”

Hoad says it’s difficult to establish that a design has been copied in the fashion industry, with many cases failing. “The scope for a bathing suit designer to differentiate themselves is fairly limited, there are only so many ways to design a one-piece or two-piece so it does make it difficult to prove a copyright case,” he said. “The legal changes prevent companies from suing from defamation in most cases, and the loss of the right to sue for defamation can be problematic.”

Crikey contacted Madden, White Sands and Seafolly for comment but they did not respond prior to publication.

Unless she was claiming to have invented the two piece, she had no hope!

The Bikini Battle story based on the two bikinis illustrated is an awful beat-up. An eagle eye is not need to quickly ascertain that they are not even of the same era. Step #1: Check the distance from the belly-button on each bikini bottom. Step #2: Check the amount of breast exposed. QED Good night and goodbye!