Behind the walls, a Quebecism version of separatism

In a picture-postcard walled city, a new revolution is brewing. Quebec has been given a revival by a new matter-of-fact separatism now alive in Europe. Crikey's man-at-large walks the cobblestones. 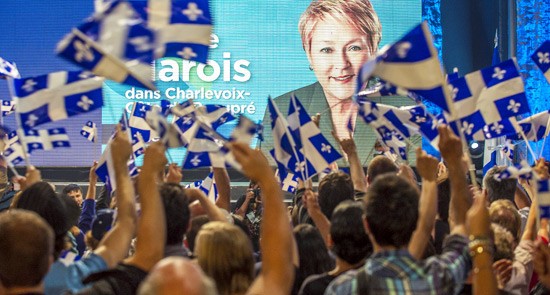 When you come round the headland in the tourist launch, and the stone towered walls of Quebec City rise above the St Lawrence River, you realise you came in from the wrong direction, days earlier, arriving at the modest train station. No, the only way to arrive is at the head of the American Revolutionary Army who came across the river in December 1775, determined to take the capital the British had taken from the French only two decades before.

But for all their revolutionary brio, even they must have taken pause, for the city walls are medieval in their bearing — running along the top of a near-sheer cliff that faces the river, with turrets, ramparts and crenellations, they are the fortress to rival the great walled towns of Europe.

The Americans had already taken Montreal; had they overrun Quebec, the British would have found their garrison to the east surrounded, the revolution would have been over within the year. Quebec would be a French-speaking American state — the arrival of the Americans prompted a near-civil war between pro and anti-American quebecois –– Canada would not exist, and the US would occupy all of North America above the Rio Grande. They were defeated by governor Carleton, who adopted the simple expedient of not venturing outside the city walls throughout the winter, and letting weather and smallpox do the rest. Quebec had won by not losing, known as the ville fortifie.

Ville fortifie it remains. Three hours north of Montreal, at the mouth of the St Lawrence river, capital of the province named for it, Quebec is no funky bilingual city. It is French through and through, from the riverside bistros and boutiques of the lower town, to the old city behind those extraordinary walls, defence meets Disneyland. Though much of the upper town burnt down in the 1880s, it was rebuilt in its original 17th and 18th century style, cobbled streets, street upon street of close town houses, shops and hotels, leading to the parliament, all towered over by the bizarre Hotel Frontenac, a grand 12-storey railway hotel of the 1890s, done in the style of a French chateau.

In the main street leading to the city gates, the shops are as they were in 1950, or 1890 for that matter; small concerns, couteriers and grocers, their vitrines models of the window-dresser’s art, blazers, bras, books, chocolates arranged in petits tableaux. In the yellow street lamps, a light snow shines and swirls as the deep blue night comes down at 4pm. God knows it seems only a matter of time before the opening number from Les Parapluies de Cherbourg starts up. It is a dream city, one of those rare places that matches, stone for stone, the images of childhood books, childhood dreams. It is a day’s drive from Detroit.

“Good god, how come this place isn’t on every US TV screen,” I asked someone in the hotel bar. “Thank God it is not,” said the bartender, which tells you all you need to know about the mindset. Ville fortifie, where even the tourist industry doesn’t want too many more of them. Were someone to really sell this place it would be crowded as Venice in the summer. But there appears to be no desire to turn it into a tourist replica of itself. How the hell it makes any money is anyone’s guess, but a fair whack of it comes from a specific city tax, and much of the rest from the business of government. And for the current occupants of the offices of premier(e), Quebec (only the English add the “city” qualifier; francophones sort out province and city from context) is not merely the head of a province, but the capital of a nation, currently sequestered within the federation of Canada.

“Amid NAFTA and the internet, it was less easy to translate the idea of fortified city walls to a nation, which its partisans believed was being subsumed by a global English-language culture.”

Since September of this year, the Parti Quebecois (les pequistes) has run the government, with PQ leader Pauline Marois the premier. The result has surprised everyone, perhaps none more than Marois herself. The dominant party in Quebec throughout the 1990s, the PQ — which favours sovereignty through a referendum — collapsed to third-party status in 2007, with the Liberals in power. The official opposition was a right-wing “autonomist” party — favouring a status for Quebec more akin to something like Scotland in the UK — the ADQ (les adequistes). Throughout the 2000s, Quebec was dominated by Liberal leader Jean Charest, even when the electorate moved sharply to the Right in ’07. By this year, they were tired of the corruption and sluggish growth, throwing him out with a 10% swing to new centre-right party the CAQ (les caquistes, or “shitters” in literal translation — they prefer “les coalistes“; no one calls them that).

But that wasn’t enough, and with a 32% vote, the second-lowest since they first took power in 1976, the PQ was back. In the ’70s and ’90s they could claim the will of the people, and a 1995 referendum on sovereignty was lost 50.6% to 49.4%, after which they began to run out of steam. Now they have returned to power, with the same mission, but a different electorate — one that wants economic solutions, and voted 60% for parties which are either federalist or neutral.

The CAQ could not support the Liberals so the price of its support for PQ is that there will be no referendum proposed for at least a decade. The PQ is perhaps relieved at that stricture. From the ’60s onwards, Quebec separatism was a powerful nationalist movement, with like all such vibrant movements, a right wing that saw nationhood as some spiritual-transcendental deliverance, and a left wing that saw it as a precondition of true independence in a US-dominated world, a chance to build democratic socialism at a national level. It had its poets and priests, its statesmen and guerrillas, the FLQ, who were, well, complex.

But such nationalism was part of the ’60s/’70s tumult, and it lost much of its meaning as a new stage of globalisation took over. Amid NAFTA and the internet, it was less easy to translate the idea of fortified city walls to a nation, which its partisans believed was being subsumed by a global English-language culture. So Maurois is faced with the problem that the identity of her party is based on prosecuting an aim, the referendum, which, if successful, would probably result in a pounding loss that would put full sovereignty off the books forever.

Not that there is a want of passionate people on either side. Speaking at her victory rally, after the election, Maurois told the crowd “we want a country and we shall have one”, at which point a gunman opened fire, killing a spectator. His motives were unknown, Time magazine remarked, before also noting: “He was heard shouting ‘the English are waking up!’ as he was pulled into a police car.”

Yes, a real enigma there. Perhaps the bewilderment is at a nationalism that many thought done and dusted by its narrow 1995 loss. Yet Quebecism has been given a revival by the new more matter-of-fact separatism now alive in Europe, from Scotland to Catalonia, to FYRO Macedonia, the only country that sounds like a Formula One team. Such new nationalisms have sheared away much of the mysticism of earlier movements — they no longer believe their nation is the font of all wisdom, European culture, naturally socialist, etc, and they see it existing as part of a European federation, rather than as a proud fortress on a mount.

This is a nationalism that a lot more people could be happy with, and the federalists who thought it killed off may find Canada ready to separate anew in 2022, as the stalwarts of Quebec City hide behind their walls, in the bistros and auberges, the libraries and cafes, and emerge victorious once the winter has passed.

Will Australia be hit by the great maple syrup drought?

I expected a quote from Cohen’s Suzanne at least in this article. Am heartbroken.

The big difference between all the separatist states you name and Quebec is, it would seem, the potential (or at least the desire) to join the EU. You can afford to shear away the mysticism when there’s the prospect of a grant or two.

What, then, is in it for Quebec’s pragmatic separatists?

Quebec separatism is all well and good, but proponents should remember that not everybody speaks French in the province. Not only do you have the English speakers in Montreal and the Gatineau valley north of Ottawa (the place where my mother grew up), you have the Cree and Inuit speakers in the north of the province. If Quebec chooses to secede from Canada, the latter tribes may want to secede from Quebec in turn.

Seriously, I’m enjoying your pieces on Quebec – but I advise you to go north if you can. Sticking around Montreal and Quebec city is good, but it’s like making a piece on NSW and not going west of the Great Dividing Range. You may find of interest the tribal negotiations that lead to things such as the James Bay hydroelectric project. It’s something that Australia can learn from.