Back when Barbara Ramjan told the media that Tony Abbott punched the wall next to her head in 1977, key Liberal figure Michael Kroger accused her of lying. Ramjan's now suing Kroger for defamation.

When former Liberal Party powerbroker Michael Kroger went on the record four months ago, branding Barbara Ramjan a serial liar, he could not have picked a worse target. If the first rule of defamation is “don’t slag off a lawyer”, then the second rule should be “don’t criticise a judge’s wife”.

Ramjan, of course, is the woman who leapt into the headlines in September after telling writer David Marr that after she defeated Tony Abbott to become president of the Students Representative Council at Sydney Uni in 1977, Abbott stood in front of her, raised his fist and punched the wall either side of her head. Abbott has denied this claim.

Arguments about this raged for weeks, with everyone who was at Sydney Uni at the time weighing in, either for or against. Kroger then made statements to The Australian newspaper implying she was lying, and to Alan Jones on his 2GB breakfast program. Jones was contacted by mutual friends after the broadcast, pointing out Ramjan has a PhD, works tirelessly for the underprivileged in her capacity as a social worker and is married to one of the country’s most distinguished lawyers, Greg James QC. James has recently retired from the NSW Supreme Court and has returned to the Sydney bar.

Jones’ apology the next day, unprompted by legal threats, was comprehensive:

“Barbara Ramjan is a person of high distinction having been awarded a D. Phil from Sydney Uni and she is married to a Supreme Court judge. Ramjan has spent years avoiding the limelight and glare of politics, choosing not to get involved after her student activity ceased. I was not aware of this and I accept now that the claim she was a serial liar is not factual.”

Ramjan has assembled a stellar legal team to run the case, instructing Patrick George from Kennedys solicitors, who has briefed Matthew Richardson and the leading defamation silk in the country, Bruce McClintock.

There are two separate actions against Kroger and The Oz, although it was indicated in court this morning the matters will be run concurrently.

After reading Marr’s report in the Quarterly Essay, I asked my husband to stand in front of me and punch the wall, because I wanted to know what if felt like. I am much taller and stronger than Ramjan, who is extremely petite, and I found it a terrifying experience, even though I knew my husband wasn’t actually going to hit me.

The case, of course, does not involve deciding whether or not the alleged incident took place, but whether Kroger has defamed Ramjan by describing her as a serial liar. The case could run into next year, prompting another round of headlines in an election year about what Abbott did or didn’t do to a woman in 1977.

The political and legal implications of this matter are being felt far beyond the walls of the NSW Supreme Court.

Abbott’s biffage par for the course in student pollie sandpit 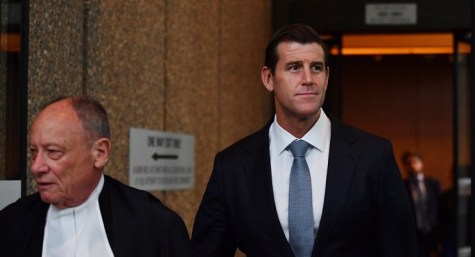 About time the gutless loud mouthed unchecked Oz & its sycophants get to justify the outrageous rubbish they come out with. Hope it costs them both a fortune.

Go Barbara! There are a lot of people wishing you well on this one.

Oh dear …. now we’re going to be treated to the spectacle of “The Lizards of Oz” using it’s auspices to “take on” Ramjan in the name of truthiness and honestry?
Did she live in “that house” too?

Go Barbara and a hope a few more join with you.

Hallelujah! I was already on a high following First Dog’s Walkley Award but now can barely wipe the smile off my face.

How unusual for Jones not to do his normal extensive background research and fact checking before letting fly.