A promise worth breaking: the surplus is slipping away

The government will need more cuts to protect its slim surplus, but is it really what the economy needs? The fetishism around returning to surplus is spooking business. 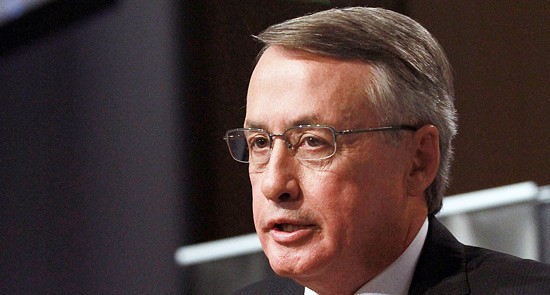 Life’s never easy when you’re the World’s Greatest Treasurer. You certainly have to have a bit of sympathy for poor old Wayne Swan, who has to operate in the nightmarish world of federal politics, where the national interest is never as important as political point scoring.

Swan has the problem that never goes away. For the best part of five years, he’s been forced to watch as tax revenues have been buffeted by the GFC, a slowdown in consumer spending, anaemic property prices, as well as a weak share market. More recently, he’s also had to worry about a fall in commodity prices, which has and will continue to crimp tax receipts from Australia’s golden goose, the mining sector.

If that hard place wasn’t enough, Swan is also pinned in by the rock that is Labor’s promise to return the budget to surplus in 2013-14.

It’s a promise that keeps getting harder to keep. Today, there are reports the public service has been told to find another round of spending cuts to help, just weeks after Swan announced a raft of cuts and revenue grabs in his October mini budget.

That’s hardly a surprise given what most entrepreneurs are seeing in the economy. Anecdotally at least, the outlook for company profits outside the mining sector is poor. There’s been some pick-up in commodity prices of late, but the mining golden goose just isn’t laying eggs like it used to.

Given Swan’s predicted budget surplus is just $1.1 billion (or it was in November), it seems likely Swan and Finance Minister Penny Wong are going to need to keep finding cuts for many months to come.

But the cuts are coming amidst what is an increasingly worrying global backdrop. While Swan seized on last week’s economic forecasts from the OECD to show how Australia’s growth is so much better than anywhere else in the world, the key message from the International Monetary Fund update was that it remains concerned about a second major global recession.

Clearly, Europe and the US provide the biggest concerns. When the OECD talks about governments doing whatever they can to restore confidence, I doubt little old Australia figures much in the conservation.

Does it make anyone feel more confident when we have to hear about round after round of cuts to protect what is a paper-thin surplus?

If federal politics was not in the state it’s in, a sensible government might have come out by now and carefully explained that as the global economic outlook worsens it will take extra steps to stimulate the economy. If that means running a small but manageable deficit, we can cope.

Instead, we get shadow treasurer Joe Hockey saying this morning the government is about to break its most important promise.

Yes, Prime Minister Julia Gillard and Wayne Swan were silly to make this promise in a world with so many unresolved economic problems. Sure, there will be plenty of economists and economic commentators who say the government should strive for a surplus to underline its discipline.

But the question should still be asked: is the fanatical surplus promise one that should be broken?

The $63 billion question: what are the stakes in a trade fight with China?

“: is the fanatical surplus promise one that should be broken?”
There is a way to run even if a number of things are already set in stone – but we won’t know the actual outcome until September, even if the budget (May 2013) number is close to actual.
The government by now has little ability to impact the outcome other than trimmings.
Not a surplus or all debt is bad fetishist at all, but in a world where things could get very ugly very quickly, perhaps the government is being prudent in preserving fiscal options.

I’m a bit confused. I often here business or the right-wing at least complaining about the government spending to much and should cut back, and now they are worried that the government is cutting spending?

The third quarter is always quiet for China so it’s not surprising that commodity price was low. The price is picking up and the miners are reigning in cost so there might be good profit to provide tax revenue, however I am concerned whether the MRRT would raise any revenue at all.

If the RBA gives one more cut this week, there will be more spending stimulus and construction activity so the budget bottom line might not be that bad.

yike, senility is not a good thing

I agree with Apollo. As miners cut back their investment in expansion, their profit margins should improve, and they would therefore pay more tax. For example, Herb Elliott has said he expects Fortescue to pay $1B in taxes and royalties this year, and $2B next year. Up from $0B previously. (Every little bit helps!) Should be the same for all the others who have slowed their expansion rates, shouldn’t it?

I find it funny that, when the PM and Swan make a promise, they’re only doing it to appease the media, or to shut the Coalition up. There is no accountability for their actions or what they promise.

The reality is that they made this promise because they acknowledge the importance of a surplus. They will be unable to achieve a surplus because left-wing policy is not accessible to policy: you can’t spend big, enhance benefits, open the gates and increase government reliance and tax and still expect a surplus.

The PM wants a surplus to play it safe. It was her conservative side coming through.

Positive politics is NOT a good thing. You need scrutiny, and you need surplus.