Clarke and Dawe sign off. 7.30 host Leigh Sales informed viewers last night she was bidding adieu for 2012 and that political editor Chris Uhlmann will fill in until February. Veteran satirical duo Clarke and Dawe also signed off with a signature sketch blending cricket and the AWU affair. “That was the final Clarke and Dawe for this year,” said a beaming Sales. “I am delighted to say they’ll be back on ABC1 in 2013.”

No mention, you’ll note, of them returning to 7.30. If Clarke and Dawe are indeed getting the heave-ho from the high-profile current affairs program after 12 years’ service, a more meaningful goodbye is surely in the works. An ABC spokeswoman told Crikey today she was unaware where Clarke and Dawe will end up next year, but said Insiders and the state-based Friday version of 7.30 had been considered. — Matthew Knott

Thanks Ten for a bumper ABC year. Taxpayers should thank Lachlan Murdoch and James Warburton for their help in pushing ABC TV to one of its best years. Channel Ten’s woes in the past four months have seen the ABC zoom past Ten to become the third-ranked network for the past 15 weeks (overall and the main channels). That in turn has helped lift the ABC’s overall performance for 2012.

A year that started poorly for the ABC — with the loss of long-time ratings giant Spicks and Specks and weak figures for several other stalwarts — was halted by Ten’s implosion later in the year, with bombs The Shire, Being Lara Bingle, Everybody Dance Now, I Will Survive and Don’t Tell The Bride. Ratings for 7.30 started kicking higher as the program shook itself free of the ghost of Kerry O’Brien, Australian Story grew its audience in the back half of the year and Four Corners, Media Watch and Q&A improved.

Front page of the day. The UK press have been anticipating what the much-awaited Leveson Inquiry would have to say on the state of the media. Here’s The Independent‘s take on Prime Minister David Cameron’s reluctance to legislate control of the press, as recommended by Leveson: 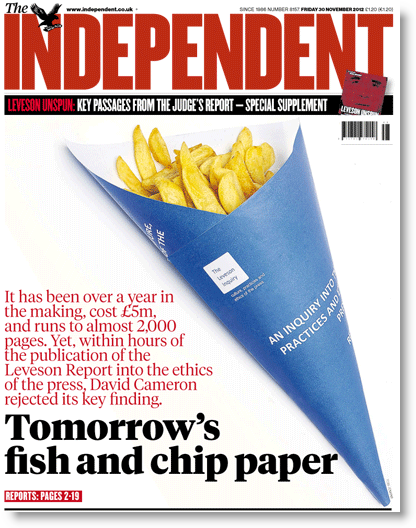