The AWU scandal has sucked the political oxygen out of the media, with all the key players dominating headlines and social media chatter, writes Sentia Media's John Chalmers.

While the last week of Parliament sitting is never without drama, we appear to be being spared the political knifings of recent years, with most of the oxygen going on the Australian Workers Union slush fund story and asylum seeker policy.

The Coalition, led by Deputy Opposition Leader Julie Bishop (as Tony Abbott outsourced the headkicking in what must have been a bitter blow), focused much of the media’s attention on Julia Gillard over the AWU slush fund, now branded as both scandal and smear campaign depending on who you listen to. Gillard’s coverage is among the highest this year in any weekly period (the stoush may best be represented here).

Despite his deference to Bishop on the AWU issue, Abbott had plenty to say on the ALP’s new immigration policy announcement. The policy, which allows asylum seekers to live in the community but without the right to work, saw Immigration Minister Chris Bowen jump 23 places as he copped criticism not just from the Coalition but plenty of heat from MP Doug Cameron on his own side. In response, Abbott and opposition immigration spokesperson Scott Morrison tried to emphasise a policy gap between the major parties’ race to the bottom by favouring temporary protection visas, and criticising the block on work as institutionalising welfare dependency.

Environment Minister Tony Burke hit third place on our chart for two weeks running as the Murray-Darling Basin Plan was signed into law last week, while both the LNP and Labor were losers in Queensland as The Mad Katter picked up a disaffected LNP backbencher, getting his party a step closer to being the official opposition. Quite a thought. 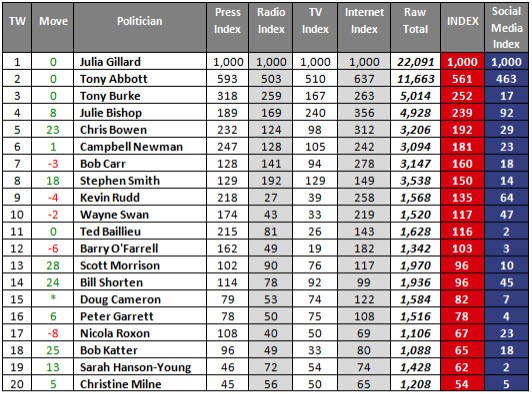 Qld Premier Campbell Newman and the tumult in the LNP had northern talkback callers fired up this week.

The AWU story had both talkback and social media on the boil, with huge volumes of mentions of the PM in both.

Pup must be all the more frustrated with drawing the Adelaide Test after another magnificent double century.