The new boss of Seven News, Rob Raschke, faces a big task in repairing the holes in the once dominant 6pm news. Plus, preparing for Leveson and other media news of the day.

Gome launches cross-border raid. New BRW publisher Amanda Gome has made her big change since taking on the role by appointing current SmartCompany editor James Thomson as editor of the business magazine. The move will see current editor Kate Mills moved to another role within Fairfax.

The appointment of Thomson signals a shift towards online for BRW, which is preparing to launch a new website and iPad in January. As well as editing SmartCompany, Thomson is also publisher of Leading Company, StartUp Smart and Property Observer (all owned by Private Media, which publishes Crikey). Gome, a former CEO of Private Media, left the company earlier this year after differences with the board. She joined Fairfax’s Financial Review Group in October.

“It’s an exciting challenge,” Thomson told Crikey this morning of his appointment. “I started my career at BRW and have followed the magazine ever since.” Thomson’s current deputy Cara Waters will take over as editor of SmartCompany, aimed at small businesspeople, in January. — Matthew Knott

Battle for the news audience. The new boss of Seven News, Rob Raschke, faces a big task in repairing the holes in the once dominant 6pm news, with Melbourne the most immediate concern thanks to a 20% fall in the size of the audience this year. There’s been a 16.4% drop in Seven’s 6pm News ratings since Simon Pristel took over as news director in late July. The bleeding in Melbourne has undermined the ratings for Today Tonight and Home and Away. And that in turn has undermined Seven’s mid evening ratings and means Nine now dominates Melbourne.

An analysis of the Oztam ratings figures shows that in the rating year up to Tuesday night, Seven’s 6pm news in Melbourne has averaged 305,000 viewers, compared with 374,000 for the 6pm Nine News. Before July 30, Seven was 50,000 viewers on average a night behind Nine’s News. After July 30 that has almost doubled to 93,000.

It’s not that Nine has grown its audience this year. In fact Nine’s news audience is now 2.7% lower than it was in the first half of 2012: 368,000 v 379,000. But Seven has not been able to take advantage of that because of the unfavourable reaction from viewers to the changes wrought by Pristel (and to news reader Peter Mitchell, who is up against the very popular and long-lived Peter Hitchener on Nine) from late July.

Now Seven people will argue that despite these problems, it still wins nationally at 6pm and frequently at 6.30pm and that is true, but only because of big margins in Perth over Nine (where Nine is a basket case and controlled by WIN, not Nine Entertainment). Seven also has solid wins in Adelaide over Nine. Up to November 27, Seven News’ five metro market average a night (Monday to Friday) was 1.212 million, the lowest since 2002. The start of the digital channels in 2010 drained several hundreds thousand viewers a night and Pay TV penetration is slightly higher. But the most important factor is the increasing commute times and longer hours for viewers from work to home, especially in Brisbane, Sydney and Melbourne. The internet, mobility and smartphones are having an impact as well.

There’s an enormous audience up for grabs: around 2.4 to 2.5 million people in the five metro markets, and up to 3.5 million when you add in around a million viewers a night in regional markets. That’s more than this year’s audience for the AFL and NRL Grand Finals, or rugby league State of Origin audience. It might be falling, but that is still an enormous market to be won and dominated, not only from 6-7pm, but for the rest of the night. — Glenn Dyer

Bolt from the blue. We’ve done it, we’ve done it! Crikey has cracked News Ltd columnist Andrew Bolt’s opinion page in the Herald Sun. Seems like he’s not a fan of “the Crikey smear site”. And this comes from an expert; if you’ve checked out Bolt’s blog lately, you’ll see he knows a thing or two about smear. Bolt is worked up about Mark Latham’s series of “Bolt Watch” articles for Crikey on Bolt’s extended claims over the Gillard / Slater & Gordon issue. 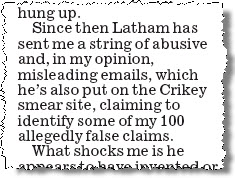 Video of the day. An interview by former Daily Mirror editor turned US talk show host Piers Morgan in 2003 has emerged where he admits to singer Charlotte Church that journalists often hacked celebrities’ voicemail. The interview appears in a documentary made by Hugh Grant about the hacking scandal. 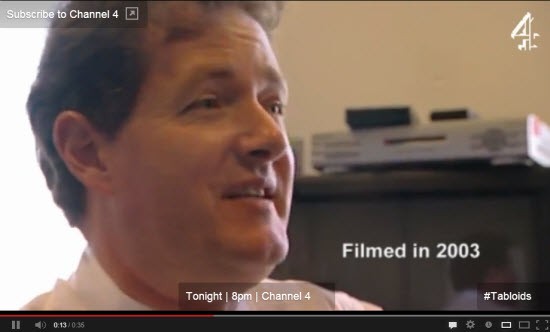 Front page of the day. Regardless of Leveson, the UK tabloids manage to keep their front page packed with two of its favourite topics: royalty and the nanny state. 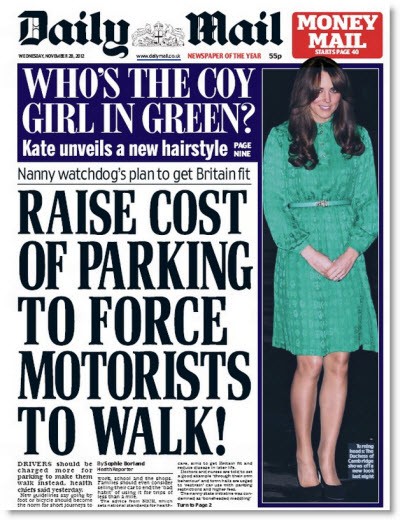