Battle of the Qantas chiefs: tourism is just a sideshow

The public slanging match between Qantas chief Alan Joyce and ex-CEO Geoff Dixon is about the future direction of Qantas as the national carrier, not the tourism market. 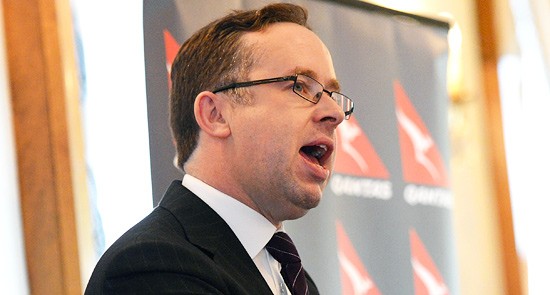 As corporate feuds go, Qantas CEO Alan Joyce versus Tourism Australia chairman (and former Qantas CEO) Geoff Dixon is all about the airline and its assets, not tourism.

To say, as some reports do this morning, that $9 billion in tourism is at risk is absurd. Neither Dixon nor Joyce have managed to stem the shrinking relevance of Qantas to either inbound tourism (foreigners) or outbound (Aussies armed with one of world’s most overvalued currencies).

The Qantas-branded market share of foreign and Australia originating international passengers combined is losing its grip on an already record low of around 18%, and while Jetstar international flights boost that total share to around 27% the figures are influenced by its significant trans-Tasman flights as well as those to Japan, Bali, the rest of Asia and Hawaii.

Tourism, important in its own right, is a sideshow in this fight.

Joyce has used it to highlight the conflicted situation of Dixon as both the government-appointed chair of Tourism Australia, and one of the disaffected shareholders calling for a change of strategic direction in the carrier, which in lay terms means its cash reserves of around $3 billion (not all of it portable), and the sale value of its Jetstar franchises and the 9 million-member strong Qantas frequent flyer, grocery and petrol buyer “loyalty” program.

And not to forget, his head on a plate.

To be unkind, it’s a contest between greed and failure, but that is also to over simplify.

Joyce has a plan for Qantas which, so far, hasn’t worked. Now there’s a major addendum: an Emirates partnership (approvals pending) which will undoubtedly work very well for Emirates, which takes over the role of Qantas via code shares between Australia and Europe, including all the bits Dixon failed to address when he was CEO, for passengers to and from Brisbane, Adelaide and Perth and in fact anywhere for which having to catch a Qantas jet in Sydney or Melbourne is a ridiculous inconvenience.

Dixon however has the backing of the board of Tourism Australia to remain as its chair, subject of course to whatever Tourism Minister Martin Ferguson thinks, since he has the stay-or-go say over the top position at the government authority.

There is much brinksmanship at play over the future direction of Qantas even before the feud between Joyce and Dixon went ballistic yesterday after the latter’s Tourism Australia role.

Joyce has burned Qantas’ bridges when it comes getting approval of the Emirates partnership which the Qantas contras have let it be known they disapprove of. The slots Qantas needed to keep serving London via Singapore after March 31 have been relinquished prior to its application to the Australian Competition and Consumer Commission for approval to fly there through Dubai from April 1. No approvals, no Qantas on the kangaroo route.

And Emirates, cleverly anticipating the risk of a Joyce overthrow or non-friendly leadership change at Qantas, has a walkaway clause in the partnership that it can activate should it not like his replacement, never mind by someone who doesn’t want to keep the deal anyhow!

Joyce has real issues to deal with to keep the support so far extended by the main Qantas shareholders. By the time the FY13 results are declared, investors clearly want to see a dividend declared as well, and Joyce has in part prepared the ground for this by having a modest share buyback program from December, and the announced early retirement of some debt and the already completed modest sale of some assets.

All good, but perhaps too modest. The tricky bit is that Qantas under Joyce is also conducting the mother of all fare and capacity wars with Virgin Australia, and the history of airline woes in general tells us, whatever we think about the other issues at play within Qantas and the market it operates in, that such fare and capacity wars are exercises in deep self harm.

So the risk of a second financial year of declaring a statutory loss for the group as a whole is self evident, as are very real efforts within Qantas to avoid this potentially negative outcome of a tug-of-war between protecting itself from Virgin Australia and getting its overall performance sufficiently respectable to prevent a dividend payment turning into a further counterproductive act.

The downside for Joyce in taking on Dixon is that it keeps the spotlight on his performance at Qantas, which has to revive its fortunes very soon if a larger shareholder revolt is to be avoided.

Joyce has already pointed to the ugly tilt against Qantas by the private equity Air Partners Australia bid that Dixon had spruiked back in 2007 before it failed to gain the necessary shareholder support. But Dixon — along with Mark Carnegie, Peter Gregg, Gerry Harvey and whomever else is joining in — can in turn keep taunting Joyce with four years as CEO during which the dividends to shareholders dried up and the share price collapsed to around half its book values today.

Pilots will hold Qantas to truth in advertising

Questions by the plane load for Qantas AGM

The so-called 9 billion dollars potential loss to the Australian tourist industry is NOT Alan Joyce’s problem. His job is to make sure Qantas makes money. NOT look after another industry.

I find it quite incredible that a private company “donates” $40,000,000 to a government body. I would have thought that Tourism Australia is a government(s) responsibility.

I, unfortunately, work for Alan Joyce and I must say that this is the first outwardly positive thing he has done for the airline. Dixon has done enough damage, both in the past and in recent history. Call him out.

Qantas provides the $44 million over 3 years to Tourism Australia, which works out to be around $14.67 million a year. It’s not added on to the Revenues (as it is classified as a joint venture), but its a bit of loss as total revenues provided to TA equal $154 million a year (in 2011/2012) (so it’s the equivalent of a loss of 8.7% of Extended Revenue) The Federal Government will be left holding the bill.
I would say that Dixon will have to resign at some stage in the next few week. He must know his situation is not good and while Ferguson is publicly supporting Dixon, I’m sure he had some quiet words that equate to “FIX IT!”

Anybody who challenges the narcissistic prince’s right to occupy centre stage must die….no matter how small minded it might seem….there just can’t be any other lead singers in the band. Remember what Kevin Rudd did to Peter Garrett? Dixon represents a much more real threat to Joyce than Garrett ever did to Rudd.

Mind you, Dixon’s position on Joyce is a bit rich….after all he, more than anybody else, is responsible for Joyce being CEO.