From former Woolworths boss to chairman of a failing media brand, Roger Corbett's stocks have fallen dramatically in recent years. But he remains among the most powerful business directors in the country through a wide-ranging collection of ASX gigs.

With two of the three ASX firms he chairs arguably about to be gobbled up, retired retail king Roger Corbett by rights shouldn’t be anywhere near The Power Index‘s top 10 directors’ list.

Indeed, for a proud operator whose product nous built Woolworths into the undisputed supermarket goliath before transporting his skills into the boardroom, the shame of being stuck with two sharemarket turkeys — Fairfax Media and ailing agribusiness PrimeAg — must be galling.

“Prime Ag is gone and Fairfax are in the shit, so Roger has lost quite a deal of power,” one leading proxy adviser explained bluntly.

But the mild-mannered Corbett, oft-derided as a “grocer in charge of a media company”, makes it in — not necessarily by virtue of his local directorships, but because of his wide-ranging non-ASX gigs touch nearly every aspect of modern life.

Crucially, he’s a director of the world’s third-largest company in Walmart, of the independent panel that sets the Australia’s interest rates at the Reserve Bank and, despite the turmoil wrought by the transition to digital, the company that continues for better or worse to publish Australia’s newspapers of record.

The straight-talking 70-year-old could conceivably cut interest rates (RBA) to stimulate retail demand (he remains an adviser to Woolworths) to in turn increase demand for raw commodities (PrimeAg), and then shape the reporting of the boom on Fairfax’s websites (charter of editorial independence notwithstanding).

Corbett ranks well down leading ASX number crunchers Optimice’s Market Capitalisation Influence Index at 1145th and is a lowly 514th on the MCII connectedness index (see a graphical representation below). But factor in Walmart’s market cap of $US235 billion and he’d be number one by a mile on both.

“I’d like to be towards the bottom of the list if you don’t mind,” the corporate veteran tells The Power Index. “Let me tell you Andrew, I don’t consider myself a powerful person and I definitely don’t go around thinking that I can influence people. All I am just trying to do is do the best I possibly can.”

But raw numbers speak louder than words. At Walmart he’s a strategic finance and planning committee member and the only overseas appointment on the union-averse big box conglomerate — the world’s third largest employer with 2.2 million staff (only the Chinese People’s Liberation Army and the US Department of Defence employ more).

Corbett joined Walmart in a surprise announcement just weeks after clearing out his Woolies desk in 2006. At the time, the move sparked fears that Sam Walton’s Frankenshop might be about to crop up in Australia, especially given that important parts of Woolies’ strategy was gleaned from Corbett’s annual meetings with then-Walmart director Jack Shewmaker.

Independent Australian Shareholders’ Association chief Vas Kolesnikoff says it’s Corbett’s “strength in leadership” that attracts international attention. While prospects at generic drug makers Mayne Pharma (his other chair) are looking up with the planned $120 million buy of US pharmaceutical company Metrics, the same cannot be said for his other ventures.

“His success at Woolworths has not translated into the same at Fairfax, where I suspect that the huge industry change could have benefited from a different skill set at chairman. As a result he has taken a lot of flak, but has maintained strength in his position,” he said.

But Kolesnikoff says three chairs “seems excessive” and could place big demands on his time, especially given the American Walmart duties that require regular overseas trips.

Corbett himself is running slightly late for our phone conversation because he was attending a meeting of the Salvation Army advisory board, one of his three not-for-profit appointments (down from four after he was sacked from his chairmanship of the Sydney Children’s Hospitals Network in an ugly spat with NSW health minister Jillian Skinner).

He rates “integrity and the balance between instinct and intuition, intellect and natural ability” as important for an effective board. Chairs are especially crucial: “The most important responsibility of the chair is to give everyone the opportunity to put their very best contribution forward and reach a consensus.”

Corbett appears to have warmed to 15% Fairfax shareholder Gina Rinehart, refuting The Power Index‘s suggestion she is a “rogue shareholder” following the duo’s bitter row in May over share price performance. And the CEO is making the best of a bad situation.

“Fairfax and Greg Hywood’s job would be one of the most difficult gigs in this world, as would any other publisher. I think he’s a great guy,” Corbett said.

With the share price finally beginning to rebound off historic lows, could he be hinting at an imminent departure? “Under normal circumstances I would no longer be chairman of Fairfax because I’ve done a pretty good stint on the board. But I’m there to support him in every way I possibly can and for the very fine journalists that provide an independent point of view in the Australian marketplace. I’m there for the foreseeable future,” he told us, perhaps a little unconvincingly.

In the end it likely won’t matter — it’ll be fish rather than fish wrappers that Corbett would probably prefer to be remembered for. 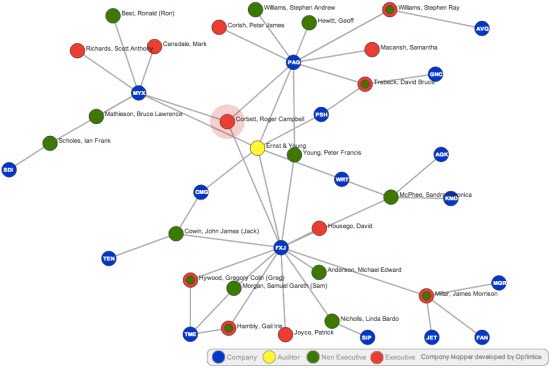 A pretty friendly article on someone who has overseen the demise of once-great Fairfax and thereby threatening the tenuous position of non-Liberal Party-betrothed national publications.
But then you’d expect a grocer to find a loss leader …

I assume that was meant to be “by rights”.

Check out his Lateline interview.