Peter Mason has the superannuation accounts of thousands in his hands. He's become a kingpin of the financial services industry since the merger of AMP and AXA last year. But Mason, outspoken on issues like Asian experience, faces big challenges on the board of David Jones.

With a hulking $124 billion in funds under management, Mason’s chairmanship of the combined entity is of upmost importance for the millions of Australians who toss in their retirement savings and share portfolios with the expectation of massive returns. While the executive power lies with CEO Craig Dunn, one strategic misstep at board level could wreck hundreds of thousands of super accounts, and with them lives.

Mason, for years arguably the nation’s leading investment banker, slots in at number 10 on The Power Index‘s directors list, chiefly for overseeing a burgeoning international conglomerate that last year chalked up an impressive $491 million profit, up from $459 million the year before. But he’s also the incoming chair of struggling retailer David Jones and is on telecommunications colossus Singtel’s board.

He told The Power Index he has spent a large portion of 2012 managing the transition to what is undoubtedly now the “fifth pillar” of the banking system, a market leader in retail super, managed funds and retirement income.

“The real objective was the integration of AXA and AMP and that’s been coming through as the results show very comfortably and that’s a very satisfying thing for all of us … it was a very big task,” he said.

The merger could ultimately become a career highlight for the softly-spoken 66-year-old, who now has another feather in his cap after being elevated to the chair of DJs following the shock resignation of Bob Savage at its annual general meeting on Friday (Savage insists he wasn’t pushed).

While Mason is ranked at just 195 on the Optimice Market Capitalisation Influence Index (which calculates the total ASX market capitalisation of his three ASX boards) and 142 on the MCII boardroom connections list (see a graphical representation below), his influence stretches much wider.

Australian Shareholders’ Association chief Vas Kolesnikoff told The Power Index that while Mason had “slipped under the radar … and that’s a good thing”, there were challenges across AMP and DJs that could cause workflow problems. DJs posted a 40% profit slump this year, from $168.1 million to $101.1 million, as consumer confidence dived. And its online strategy has been stillborn. “He’ll have his work cut out sorting out the mess,” Kolesnikoff said.

Kolesnikoff also questions whether Mason will be able to devote significant time to his two chairs. Indeed, overcommitment can cut both ways — Mason was criticised last decade for wearing two hats given UBS and AMP were clients at the same time he worked for both of them. Mason denies the charge. “UBS had an association with AMP long before I became involved with AMP and long before I became involved in UBS. When the question of appointing advisers arose I was not a party to it in any way whatsoever.” AMP remains a UBS client and Mason remains a “senior adviser” to UBS.

A star during his 40-year executive career at investment bank Schroders, Mason now is the crucial financial linkman across five diverse government and charitable organisations. He’s the chair of Kevin Rudd’s groundbreaking Centre for International Finance and Regulation and sits on the boards of the University of New South Wales Foundation, UBS Australia Foundation, and the Sydney Opera House Trust.

Mason says he sometimes felt “a touch of guilt” at his success in life and had a responsibility to become involved in the wider community. He was appointed to the “wonderful” Headspace National Youth Mental Health Foundation by John Howard and re-appointed under Labor.

“I’ve always felt a sense of responsibility of being involved in the wider community. With wisdom if you use it in a corporate environment you can use it in other environments as well,” he says.

Mason has been an outspoken critic of Asian Century white paper recommendation to mandate a one-third share of Asia-experienced directors on ASX 200 boards by 2025, calling it “trite”. He also rejects a quota for women (although less vociferously), and says that tilting boards too far in one gender direction or the other can have unintended consequences.

His wife’s experience as chairman of the female-dominated Pymble Ladies College council was a cautionary tale: “Any committee that is made up totally of males can lead to macho behaviour, and any entirely made up of women can lose focus.”

Pressed for his highlights of the past 12 months, Mason rates the changes wrought by digital technology across his three directorships, especially at David Jones. “I really think that more than any time in my 40 years in the commercial world, whole corporate business models are very much under threat,” he said. “The disruption caused by new technology and social media are changing every business.”

Truly powerful directors need a bit of “gnarly experience”, Mason says, to deal with the challenges of the modern world. He’ll need to draw on plenty of his own to stay on The Power Index‘s top 10 list in the months and years ahead. 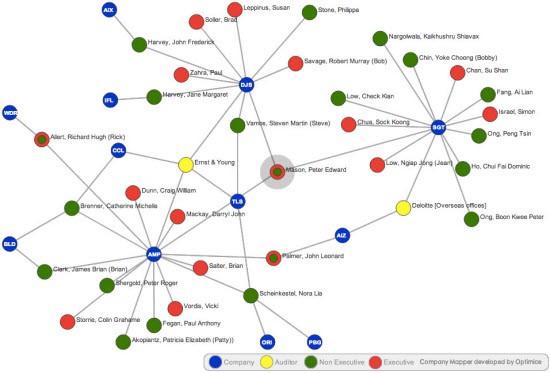 When the blokes bugger it up, who you gonna call? Ask Alexis

Nice bloke, but your list generally looks to be very loose.

What I’d like to see is Peter Mason being interviewed by Max Kieser of Keiser report. Then we’d find out how “nice” some of these people really are! http://www.huffingtonpost.com/joshua-m-brown/best-financial-journalists_b_1605584.html