One thing you can say about American newspapers: they are committed to transparency, so much so that they are not backward in charting the slide towards destruction for their industry. Plus other media news of the day.

How to get a gong at ACP? Try a boob gag.  ACP Magazines, now owned by German conglomerate Bauer Media, held a ritzy awards ceremony at Sydney’s QT Hotel earlier this week. The awards were held at breakfast time — an innovative way, we suspect, of cutting back on the normally exorbitant bill journos rack up when their company opens up a late-night bar tab.

Australian Women’s Weekly gun Helen McCabe unsurprisingly took out the prize for best monthly mag editor; NW‘s Corrine Barraclough was named best weekly editor. More surprising, in these times of increased awareness about all things misogynist, were the two gongs for Zoo Weekly. It’s the low-selling lad’s mag, you’ll remember, that was forced to apologise earlier this year for launching a search for Australia’s hottest asylum seeker. Never mind. The Zoo boys apparently produced the cover of the year and the best three headlines.

The winning headers were: “Truck me dead! Storm pops her bonnet!”, “Peaks of nature: Courtney’s cans are huge”, “Tongue Talent Time: Angela knows how to talk dirty”. Who said the art of subediting was dead? — Matthew Knott

US rags let the light shine in. One thing you can say about American newspapers: they are committed to transparency, so much so that they are not backward in charting the slide towards destruction for their industry, as revenue from traditional print ads falls and the growth in online revenues fails to keep up with that plunge. That’s so unlike the Australian industry which has always done its best to hide its revenue situation, no matter how good or bad it is.

The Newspaper Association of America releases its quarterly revenue figures and for years now the figures have charted a slide towards oblivion. Figures for online and analogue ad revenues are detailed each quarter, such as the September data, which showed a small perk up in online revenue growth and a further slowing in the loss of revenues from print (analogue) ads.

While online ad revenues rose 3.60% in the three months to September, to $US758 million, for the best performance so far in 2012, that was nowhere enough to offset the 6.40% slide in print ad revenues to $US4.513 billion. In fact online ad revenues rose a grand total of $US26.4 million from the third quarter of 2011. But that was well short of the $US310 million fall in print ad revenues in the same quarter. That left US newspapers more than $US280 million worse off than the third quarter of 2011. It means oblivion is a small step closer, especially for some big names (more than 20 papers have closed or gone on line only since 2007).

That leaves the US industry on track to report yet another record low for total revenues when it reports next March. Last year’s total was almost half the more than $46 billion in revenues back in 2003 and the lowest since 1984. At the current rate of growth print ad revenues will fall under $US20 billion for the first time ever in 2012, while online ad revenues will top $US3.4 billion for the first time. The association also gives annual circulation revenues and in 2011 they dipped to $US9.989 billion (the lowest since 1996) from $US10.049 billion in 2010.

US newspaper sales eased 0.2% in the six months to September 30 (and Sunday paper sales rose 0.6%), but the big story was the growth in digital subscriptions from 9.8% of overall sales in the six month to September, 2011, to 15.3% in the six months ending September 30 this year. That gave some heart to US newspaper owners and journalists, but the meagre $US26 million rise in online ad revenues in the quarter has dashed hopes that those higher subs can be turned into revenue. It is only isolated papers such as the Financial Times which have managed to offset circulation slides (16% in the year to September) with higher revenues from digital subscriptions and digital ad revenues.

In Australia we have no way of knowing how Fairfax, News Ltd and APN are going so far as total revenue, online revenue and revenue from print ads. All we know is total online revenue is now bigger than newspaper ads, or was in the six months to June at $1.6 billion against $1.5 billion for newspapers. The online figure includes newspapers, as well as search directories and other websites. — Glenn Dyer

Lead on The Age online: 11 days old. If it’s not viral, it’s not news. We’re beginning to wonder if those words have been plastered all over the cubicles of Fairfax online, judging by what’s leading their websites this morning. One particular yarn took our eye, an interview with 22-year-old Samantha Busch from Illinois (which was picked up from UK site The Telegraph). Her claim to fame? She posted a clever image from the Grand Canyon on Reddit.

Funny? Sure. Current? No way. Turns out the picture was uploaded to Reddit 11 whole days ago. Ancient history for the internet, but news for Fairfax. 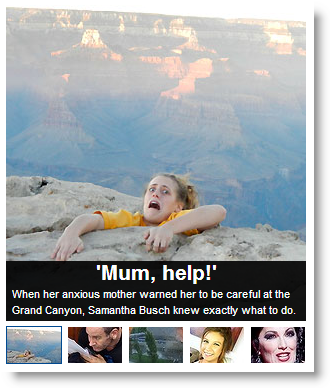 Headline of the day. We know it’s hard to make a Gerard Henderson op-ed sound exciting, but surely the smh.com.au sub behind this headline could have tried a bit harder.

Video of the day. Hard-hitting political reporter Angela “red carpet” Bishop scored an exclusive interview with mining extraordinaire Gina Rinehart.  The Channel Ten shareholder is on the PR trail for her book, Northern Australia and then some. 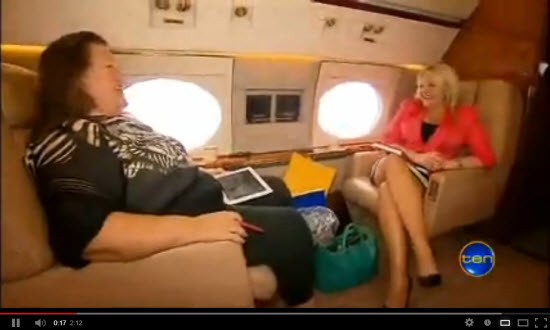 Re Gina and A Bishop: the desire to travel in a private jet suddenly holds no glamour.