The mechanics of how a smear campaign was legitimised

What began as a smear campaign against the Prime Minister became a major media story only a few days ago, when it stopped being merely a News Ltd smear campaign. 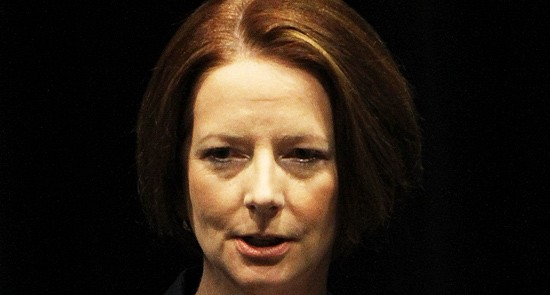 This legitimization of the story has coincided with it becoming clearer just how little of substance there actually is to it. The best illustration of this was an intriguing interview on Friday by the ABC’s Jon Faine, who unlike his colleagues at Media Watch has kept his critical faculties intact about the story. Faine put the Prime Minister’s most ardent pursuer (after Larry Pickering, a former cartoonist at The Australian regularly criticised for being misogynist and an anti-semite), former shock jock Michael Smith, on the spot to outline a specific allegation of wrongdoing. The best Smith could do, the crime that he claimed “could cost the Prime Minister her liberty”, was falsely witnessing the date of a document, though he was unable to point to evidence to support this beyond the claims of Ralph Blewitt.

Until the story became legitimised, it was being driven primarily by one media company’s obsessive war with Labor, although Mark Baker’s enthusiasm at The Age, while not raising any new issues, gave some cover to News Limited. It wasn’t purely about Julia Gillard, although the smear campaign became ever more strident as she improved in the polls. But even if there’s no connection demonstrated with the Prime Minister, the incessant repetition of stories about union corruption serves a broader purpose of attacking the trade union movement. Union corruption is a convenient narrative, although by no means confined to News Ltd; most media outlets, and particularly The Australian Financial Review, find union corruption endlessly fascinating while remaining for the most part bored by business malfeasance (the splendid recent example is that of Hastie Group, where $20 million was stolen and sparked the collapse of the company, with barely a flicker of interest from the media beyond how many jobs would be lost).

At no stage was any rationale offered for how the story related to the public interest or merited the significant devotion of resources made to it by media outlets under severe financial pressure. Not even the sole contemporary relevance of the story, that disgruntled Kevin Rudd supporter and sacked Attorney-General Robert McClelland appears to have been involved in perpetuating it, was discussed.

What was intriguing about the campaign at this stage was that it was strongly gender-based. The campaign was being run entirely by older white conservative males. The Australian is staffed and run almost entirely by such people. The shock jocks giving constant airtime to it are the same. The bloggers and net trolls obsessing about it online, too, are the same demographic. That, of course, is the same demographic and the same media figures that drove the anti-carbon price and climate denialist protests, as well as the debacle of the “convoy of no consequence” campaign.

Indeed there are strong themes running through all of these campaigns: Gillard is an illegitimate Prime Minister, she has no morality, and her lack of morality and incompetence is somehow linked to her gender — it’s an easy segue from “Bob Brown’s b-tch” to Bruce Wilson’s dupe, although of course her enemies have been anxious to suggest that Gillard may well have been even worse than a simple dupe.

Last week, however, the story stopped being merely a News Ltd smear campaign. Television and radio coverage surged massively. Media Monitors data shows that weekly television and radio mentions of the story were limited to several hundred in total in recent weeks. There were 110 television mentions of the story in the week beginning 29 October, no mentions at all the following week (Melbourne Cup week) and 446 in the week of 12 November.

Last week, however, there were over 2,200 mentions. Radio coverage followed a similar pattern, but TV coverage is the key: few voters read newspapers and none but the politically engaged would have read more than a few pars of the dense, pointless minutiae paraded by the likes of Baker and Hedley Thomas. Coverage on nightly news bulletins is many, many multiples of newspaper coverage in terms of impact on voters.

And in particular, TV coverage went off last Wednesday, with 224 mentions of the story, up from low double figures in the two days before. After that, the story received massive television coverage. To put it in context, the issue was the fourth most-discussed subject on television, behind Gaza, the cricket and asylum seekers, but ahead of the child abuse royal commission.

Wednesday was, coincidentally or not, the day after 7.30 aired its interview with Ralph Blewitt — an interview that displayed a peculiar lack of curiosity about Blewitt’s activities in South East Asia in recent years, but did yield one of the great moments in Australian interviewing, when Blewitt declared the Prime Minister had questions to answer, but then answered “no comment” when asked what the questions were. The next night 7.30 followed up with an interview with Nick Styant-Brown that, while labeled “exclusive”, didn’t appear to add anything to what he had already told newspaper journalists.

Blewitt’s return to Australia and 7.30’s embrace of him as newsworthy (possibly at the prompting of Media Watch, which devoted an episode to how the ABC wasn’t following The Australian’s lead) thus appears to have been critical to elevating what was (and remains) a smear campaign into a legitimate political story.

Since then, Press Gallery groupthink has taken over. It’s now a story because it’s a story. Outlets dare not fail to cover it. “The story won’t go away,” was Peter Hartcher’s line on the weekend; a journalist complaining that a story won’t go away being equivalent to an offensive drunk in a bar complaining about the obnoxious clientele present. Only a handful, such as Ten’s Paul Bongiorno, have bluntly called the story what it is.

Unlike the initial smear campaign, how much gender plays a role in this isn’t clear, but is worth some thought. The Press Gallery is just over two-thirds male, and the more senior you go, the fewer women there are. That’s not to suggest female journalists are going to give a female Prime Minister any sort of pass on alleged impropriety — far from it. But much of the Gallery spectacularly missed the significance of the Prime Minister’s misogyny speech, partly because they were doing their day job of analysing the tactical battle on the floor of Parliament, but also, one suspects, because they failed to understand how much it would resonate with women who routinely put up with s-xism in their working lives. Tribal behaviour is at work here on this story as well and that can’t be understood without reference to gender.

That sort of tactical analysis, focused purely on calling who’s winning particular political square-ups, will dominate coverage this week. The first round of that will be the Prime Minister’s press conference today at 1pm, as Crikey is issued, followed by Question Time. So many tactics, so little reflection on the actual merits of the story.

AWU commentator at The Oz forgets to note his Liberal past

Surely “union corruption” depends more on which “union” is involved – and is all the more legitimate a cause célèbre, as long as they have blue collars – going on “media reports/interest”?

Thank you Bernard, for calling it as it is.
A complete disgrace.
The Press Gallery disgusts me.

Personally I can’t wait for the same media – having taken such a strong stand on this particular event 20 years ago (“going to Gillard’s ethics”?) – to apply the same standards of acceptable behaviour, and their own devotion of resources to investigation, to the rest of our elected representatives (how many will that leave standing – anyone “running book” on that?).
Otherwise this becomes their own “Burn the Witch” party?

Mark Baker at The Age has been running the same story every day – day after day the same information, some variation in presentation. And he doesn’t seem to understand how the incorporation process works, what the role of the lawyer is or how incorporated associations can work.

Now of course with 2 newspapers running the same old, same old story every day, the rest of the media feels obliged to cover it. Now they can report, as Mark Baker did, that the story has received widespread coverage and attracted increasing interest! As you say it has become a story about a story.

Otherwise this is the cacophony of a (press) gallery of pink galahs.

[And how the ABC had to be goaded into playing “Rupert Says” – but it too did eventually join in. Though it’s not as if Sales (“Murdochtrinated” as she is), with her political sympathies, ever needed a cause to slur Labor?]