Gina Rinehart will spend the next 36 hours zipping between Brisbane, Sydney and Melbourne to launch her top-secret book of political essays. A presentation reveals personal photos of the billionaire.

Gina Rinehart’s top-secret new book will launch today to sympathetic mining and business crowds in Brisbane and Sydney — although no journalist has laid eyes on it and the book’s publisher refuses to discuss it with Crikey.

The tome — titled Northern Australia and Then Some — Changes We Need to Make Our Country Rich — is billed as a collection of political essays. Editor Eden Cox describes it as “a compendium of speeches, articles and images” that “offers the reader a comprehensive insight into her [Rinehart’s] thoughts about national prosperity, and an intimate glimpse of the life and times of this prominent Australian, who has assumed the mantle of Western Australia’s resources pioneer”. 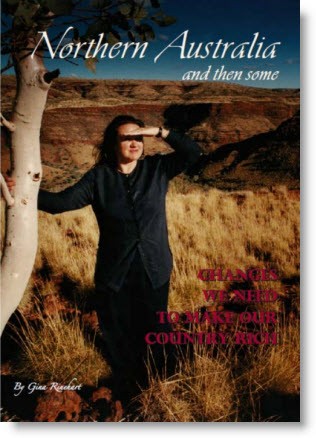 There’s no word on whether it will cover any of her notorious court battles with her children, but there’s a family reason Rinehart’s book is being launched today. As the invite to the launches says:

“The date is special, being the 60th anniversary of Lang Hancock’s important flight in his Auster, together with his wife, Hope, when he first discovered the massive iron ore deposits in the Pilbara, on November 22, 1952.”

The book launch presentation, available through the Institute of Public Affairs’ website (which will host Melbourne’s book launch tomorrow), shows personal photos made available by Hancock Prospecting, mainly of Rinehart and her dad, their beloved Pilbara, Rinehart mingling with politicians such as Martin Ferguson and Joh Bjelke-Petersen, and Rinehart doing business in Asia — plus cartoons slamming Rinehart and Rinehart criticising media coverage of her business: 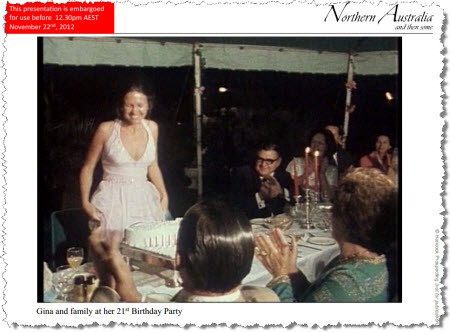 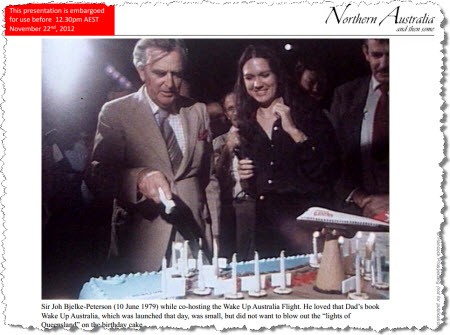 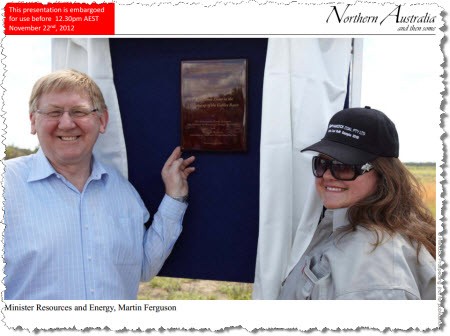 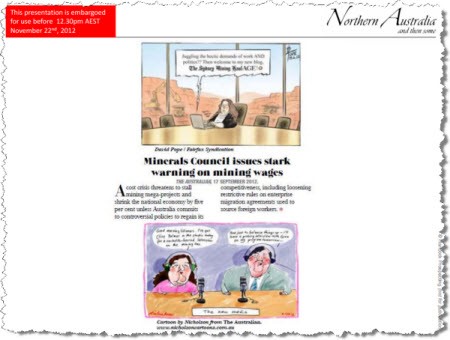 It also contains glowing references from other wealthy business types such as John Singleton, Dr GVK Reddy of Indian conglomerate GVK Power and Infrastructure and Alejandro Chaufeu, president of the Atlas Economic Foundation. 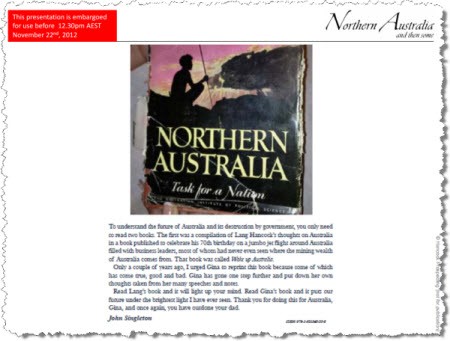 Northern Australia and Then Some is published by Executive Media, which also publishes Australian Resources & Investment, a quarterly magazine that Rinehart regularly contributes to. Cox is its editor.

Crikey contacted the publisher and was told business development manager David Haratsis was the best person to speak to regarding Rinehart’s book. Five seconds later (presumably after being told Crikey was on the phone) Haratsis wasn’t available as he was on the way to Sydney for the Rinehart book launch this evening. No one else was able to speak, no further information could be given and Haratsis couldn’t be contacted any other way. “You missed the boat,” the Executive Media receptionist told Crikey.

Crikey did confirm that neither Rinehart nor the Hancock Group of Companies hold any financial stake in Executive Media.

Trevor Sykes, former Pierpont columnist at The Australian Financial Review and patron of the Sydney Mining Club, will launch the book in the Grand Season ballroom at George St’s Four Seasons Hotel this evening. All 310 tickets — which the SMC was selling for $75 — were swooped up, and Rinehart will be there, as the invite states, to “share something of her story including launching her ‘Little Book’, a tribute to her late father who opened up the North West in West Australia”.

In a statement regarding the book’s launch, SMC chairman Julian Malnic declares: “Through reading this book, you are offered an intimate view of the values and history from within the family behind the success. You will notice the contrast between what you read here and the picture of this visionary family painted in the Australian media.”

However, a SMC spokesperson confirmed to Crikey Malnic hadn’t read the whole book but has “seen parts of it” (copies were only received on Monday) and Sykes has yet to read or see the book. Crikey understands other business journalists requested embargoed copies but were denied.

Before the glitz and glam of the Four Seasons, Rinehart will stop off in Brisbane for a lunchtime launch at the Stamford Plaza, hosted by the Small Business Association of Australia. Rinehart is chairman of the SBAA, a little-known group based at the Gold Coast. Tickets to the lunch were $150 per person or $1400 for a table of 10.

Tomorrow Melburnians can head off to the IPA-hosted launch, believed to be a cocktail party at the Grand Hyatt.

Western Australia may hold Rinehart’s love and money, but that’s not enough to get her to attend the Perth launch. The Pastoralists and Graziers Association will host this evening’s drinks at Subiaco’s PURE bar, with about 50 people expected.

Crikey understands a number of smaller launches, organised by Hancock Prospecting, will be hosted today at mining towns and sites, including Port Hedland.

The five trials of Gina Rinehart

I see Gina spent up big on a graphic designer for the front cover.

We could kick off a fun competition to re-title the book but I fear we’d all end up as litigants.

Dear crickey (or Power index) I’m sure I’m not alone in wanting to learn more about the “Small Business Association of Australia” and Ms Rinehart’s role therein.
Seems with Gina as chairperson, the “Small” part of their moniker is oxymoron at best.
No suprise to see a mining magnate joining a pressure group in Queensland but I’m wonsering who else is involved and if “SBAA” has given money to the LNP (or connected in some more intimate way….?).
Please investigate.

@ Jason. re the cover. It looks like she did it herself. I like the reverse Ned Kelly she’s got going on in the photo’. Not so keen on the maroon font of the subtitle.

I do hope the pome is in it. And then some.