During the Queen’s visit last year a symbolic moment occurred in Australian politics when she was greeted by the Governor General, the Prime Minister and the ACT Chief Minister. All three were women. The recent ACT election saw the issue of women in politics highlighted when an unusual phenomenon occurred with the Labor Party having […]

During the Queen’s visit last year a symbolic moment occurred in Australian politics when she was greeted by the Governor General, the Prime Minister and the ACT Chief Minister. All three were women.

The recent ACT election saw the issue of women in politics highlighted when an unusual phenomenon occurred with the Labor Party having an equal representation of men and women which Chief Minister Katy Gallagher said is a positive step.

“It’s great to have more women in the ACT Labor caucus,” Ms Gallagher said. “The Labor party at a national and territory level has always had a pretty strong affirmative action agenda and it’s great to see this reflected in a Labor caucus that is equally split between women and men.”

The ACT election showed an unexpected swing towards women with Guilia Jones being elected for the Liberal party and fellow candiates Steve Deszpot and Elizabeth Lee coming agonisingly close to election.  Labor candidate for Molongolo, Meegen Fitzharris, received 50% more than Minister Simon Corbell’s primary vote and Greens, Caroline Le Couteur, was only a few hundred votes away from Shane Rattenbury.

These results shine a dim light at the end of the tunnel of equality with the overall number of women in the ACT Legislative assembly declining which the Chief Minister said is disappointing.

“Despite the advances made by Labor we have fewer women overall in the assembly which is disappointing,” she said. “It is important that our assembly represents the wider community as much as possible. By having more women in the assembly we benefit from more diverse perspectives on the issues facing our society.”

The ACT Greens also resulted in a low representation of women losing three female MLA’s but Shane Rattenbury said this will not prevent women’s needs from being addressed by the party.

“We will always advocate on these issues regardless of the configuration of our representation. We have a strong history of women’s representation, including the fact that we have only ever had one man as an MLA and in our federal parliament we have a woman as a leader, as well as 60% representation by women,” Minister Rattenbury said.

Although the Greens’ Caroline Le Couteur was unsuccessful in this election she agrees the Green’s Party will meet the needs of women in the ACT despite having no females in the Legislative Assembly.

“Shane Rattenbury represents a party which has many female members that he will be able to consult along with other constituents about women’s issues,” Ms Le Couteur said. “ Of course it would have been preferable to have more Green MLA’s and thus have a gender balance in our Assembly representation.”

She added that the presence of women in parliament does not necessarily mean their needs will be addressed.

“It is important to have women in politics, however; it is too simple to assume that just because women are in politics then all women’s issues will be represented,” she said.

Elizabeth Lee was a candidate for the Liberal party and agrees it is important for women to be represented in politics and that they should be treated equally.

“Women bring different skills and strengths to any industry, profession and arena, including politics,” Ms Lee said. “I do not expect nor do I think it’s appropriate for women in politics to be treated any differently.  I do, however, think it is important that women feel they have the same opportunities as anyone to enter politics.”

Roslyn Dundas was the youngest woman to be elected onto an Australian parliament in 2001 when she became a cross bench member on the ACT Legislative Assembly. She believes it is important to have a range of people represented in politics including women.

“We need diversity to reflect the diversity in the community including gender, age and life experiences and to set a standard,” Ms Dundas said.

Julia Gillard’s recent comments of misogyny have drawn interest to women in Federal politics and her comments in 2009 demonstrate she believes gender should not be a factor in the role of a politician.

“For women in politics to end up being treated, and seen truly, as equals to men, you have to get to the stage where it’s routine and normal to do every job in politics, so that no one bothers to lift their eyes anymore and say ‘is it a man or a woman doing that job?’”

Although quotas, training and mentoring have improved the success of women in the field of politics is improving they still face challenges through the disproportionate ratio of women to men with just 67 female Federal Parliament members in 226 during 2010.

ACT Chief Minister, Katy Gallagher, attended a breakfast and spoke with Prime Minister Julia Gillard when their topic of conversation turned to women in politics. Both agreed that while times have changed women still face challenges.

“There is still prejudice about women – for example the Prime Minister has been criticised for not being a mother, while I have been criticised for being a politician with young children. Women in politics are continuing to blaze a trail that I hope will see our daughters and their daughters enjoy true equality of opportunity,” Chief Minister Gallagher said.

History of Women in Australian Politics

NSW was the second state to have a woman in parliament when Millicent Preston-Stanley was elected in 1925, in the same year she became the first female member to speak in NSW parliament.

In the ACT women have always have always been made an impact in the ACT since the Walter Burley Griffin designed Canberra with the input of his wife Marion Griffin. Susan Ryan played a key role in the Sex Discrimination Act 1984 as the first Labor Senator for the ACT and three women have been Chief Ministers for the ACT.

Despite the increased presence of women in Australian governments over the past three decades, especially with the first female governor-general Her Excellency Quenton Bryce being appointed in 2008, however; their representation is still low in comparison to their male counterparts.

A symbolic moment in Australian politics was made when the Queen was greeted by three powerful female leaders but the truly significant moment will be the time when this scene will not be viewed as unusual. 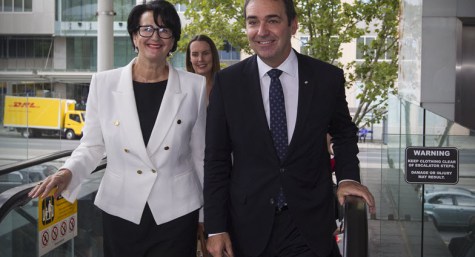