Rebekah Brooks and Andy Coulson will face yet more criminal charges over phone-hacking in the UK. News Corporation and Rupert Murdoch won't escape this crisis any time soon. 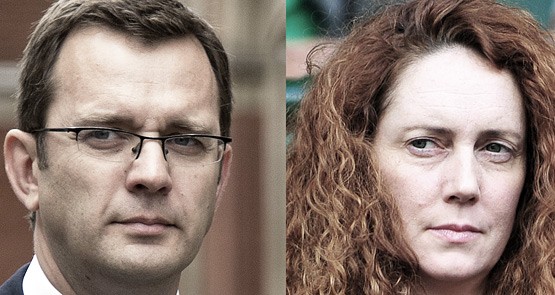 Just as The New York Times was telling us Rupert Murdoch has his happy face on again and is bouncing around like a 70-year old, because the BBC is in so much shit, the world’s most powerful media baron has received more bad news: two of his ex-editors at the News of the World, Rebekah Brooks and Andy Coulson, will face yet more criminal charges.

The latest offence they’re fingered for is the payment of large amounts in bribes to public officials to obtain confidential or private information. In Brooks’s case, it is alleged to be 100,000 pounds to a public servant at the Ministry of Defence for a series of articles by The Sun’s lead reporter, John Kay, almost certainly on Afghanistan.

In Coulson’s case, it is for splashing Murdoch’s cash on a copy of the so-called Green Book, which lists ex-directory numbers for Britain’s royal family and royal household. Funnily enough, Coulson will find himself in the dock with ex-NotW royal correspondent Clive Goodman, whose arrest and subsequent jailing on hacking charges back in 2006 set off this whole sorry saga.

The new indictments mean Brooks and Coulson have now hit the trifecta, in that they have scored a mention from the Metropolitan Police on three separate counts: conspiracy to hack phones, conspiracy to pervert the course of justice and conspiracy to commit misconduct in public office. This last, strange-sounding charge has doubtless been brought because it carries a prison sentence, which the Data Protection Act 1998 does not.

One imagines the police will be expecting a better result than they got from Operation Motorman in 2004, when two private investigators and two policemen pleaded guilty in the High Court to buying and selling information from the Police National Computer — for use by several Fleet Street papers — yet still walked free.

So what’s the significance of the new charges and how much trouble could they spell for Mr M? The answer, it seems, is plenty.

First of all, they bring Murdoch’s Sun newspaper into the frame for the first time, because the Brooks charges relate to the daily tabloid rather than NotW. Thus, they spread the allegations of criminal behaviour into an even more important section of Murdoch’s media empire in Britain, and one that has not been closed down.

Second, they extend the period when criminal activity is said to have taken place, because the Brooks charges allege payments were made up until January 2012. This not only covers the time when Murdoch’s favourite editor was running his favourite rag, but also includes the years when she was in charge of all his British newspapers. Amazingly, it suggests payments may have continued after the phone-hacking scandal went nuclear in July 2011.

The third reason they are significant is that a string of charges against other Murdoch employees are likely to follow. So far, 21 Sun journalists — a news editor, crime editor, managing editor and a former deputy editor — have been arrested by the Met’s Operation Elveden, which is dealing with corrupt payments to public officials. And many of these are still employed at Murdoch’s favourite red-top. If Britain’s Crown Prosecution Service decides that some should now be put on trial alongside Brooks and Coulson, it will surely take the spring out of Murdoch’s step.

In this context, it’s worth remembering the Met’s Sue Akers told the Leveson inquiry last February that police had uncovered a network of public servants whom The Sun was paying for information, and that moles in the police, military, government, health and prison services had been all pocketing the Dirty Digger’s cash.

“There also appears to have been a culture at The Sun of illegal payments,” Akers told Leveson. “And systems have been created to facilitate those payments, whilst hiding the identity of the officials receiving the money.” On that basis it seems inevitable more high-ranking editorial executives at Britain’s top-selling tabloid will soon be in the dock if the police get their way.

All this is likely to stir up the Department of Justice in the United States, which has been leading an investigation into possible breaches by News Corporation of the Foreign Corrupt Practices Act 1977. Given a significant amount of money is involved, that Murdoch’s former British CEO is one of the accused, and that a Ministry of Defence official has allegedly been bribed, it will be much harder for the DoJ to ignore. Its investigation is still likely to drag on for years and ultimately be settled by fines not prison sentences if offences are found — but it now seems less likely News will escape scot free.

But there are other subtler ways in which these latest charges may have an impact. Coulson’s new disgrace will further embarrass British Prime Minister David Cameron and could make it harder for him to oppose regulation on the British media, as Lord Leveson is likely to propose when his much-awaited report is published later this month.

Coulson was hired by Cameron as Conservative Party communications director shortly after he resigned as NotW editor in 2007, and ended up running the PM’s press office in Downing Street, before being forced to resign for a second time in July 2011. Now he’s in the news again for all the wrong reasons, just as Britain’s media is hoping it can rely on Cameron to resist Leveson’s recommendations for statutory regulation of the newspaper industry. His latest set of charges (and the fact The Sun is now also in the firing line) will arguably make it more difficult for the PM to hold the line.

Finally, one shouldn’t miss the little twists in all of this.

First is the evidence allowing the police to bring these charges against Brooks and Coulson almost certainly comes from Data Pool 3, which was originally deleted by News International on the orders of a senior Murdoch executive in Britain in late 2010 and early 2011. This was later reconstructed by computer technicians.

Second is that the half terabyte of data (with its 300 million emails, invoices, phone records and expenses claims) was eventually handed over to police by News Corp’s management and standards committee, set up by Murdoch and the board in July 2011 as the phone-hacking crisis spun out of control. It was around this time the 81-year-old tycoon took Brooks for a stroll outside his Mayfair apartment to demonstrate his support, and told the media she was his top priority.

With hindsight, one can now see there were other things of even greater importance to Murdoch senior, such as saving the reputation of his empire and moving on to the next great challenge.

According to The NY Times yesterday, that challenge could involve a takeover of The Chicago Tribune and LA Times, some of whose veteran journalists have recently been expressing their horror at the thought of Murdoch buying them up. We wonder whether the Brooks and Coulson charges — and the prospect of more to follow — will give those Murdoch haters a better chance of escaping their fate.

It will be interesting to see if The Australian devotes as much effort and real estate to reporting the recent, alleged criminal shenanigans of Ms Brookes and Mr Coulson, as it does for unfounded events seventeen years ago by Ms Gillard.

Odds on that they don’t; but that the Murdoch Press for you!

and that moles in the police, military, government, health and prison services had been all pocketing the Dirty Digger’s cash.

Here on Crikey. Subscribers like you may publish your own reports as comments about these sorts of media reports from England. As you hint the reports about our Prime Minister dating back seventeen years ago are unfounded. She can always sue. In the mean time my perceptions of her and her Labor Party nationally is from the top on down, they are just no dam good. The law and the law courts which so many politicians reach for when in a tight corner. Have nothing at all to do with my perceptions based on the way so many labor politicians and their supporters have accommodated identified political sins against the peoples . Edward James

Get a new wig. The red one’s bloody awful!

Firstly, in regards to new allegations (payment of 100,000 pounds to a public servant in the Ministry of Defence).
If the evidence is substantiated,I don’t see how the ‘powers that be in the upper echelons of the former company’ can avoid another round of questioning. I expect Barristers for the defense are working in overdrive right now.
Secondly,I feel it’s derogatory to our ADF personnel to associate the term ‘digger’ with ill gotten gain through unethical business practices.