Murdoch apologises (kind of) for Jewish press tweet. Rupert Murdoch’s thumbs were working furiously on the weekend as the Sun King gave his 366,000+ followers a stream of consciousness spray about the world’s woes. Amid tweets bagging his media competitors and promoting a 20th Century Fox film, the world’s most powerful media proprietor offered some fascinating morsels on the conflict in Gaza.

The tweet nevertheless generated a hostile response, which saw Murdoch respond with this semi-apology: “‘Jewish owned press'” have been sternly criticised, suggesting link to Jewish reporters. Don’t see this, but apologise unreservedly.”

No, we aren’t quite sure what that means either… — Matthew Knott

The Fitzshameless files. Earlier this year, Crikey launched the Fitzshameless Awards for blatant self-promotion, named in honour of Sun-Herald scribbler and bandana aficionado Peter FitzSimons. The gong never really took off; perhaps because no other columnist can match Fitzy when it comes to spruiking their side projects. The prolific author famously plugged one of his books five times in the lead-up to Christmas last year — a record that earned him a gentle rebuke from readers’ editor Judy Prisk.

While yet to scale those heady heights this year, FitzSimons put in an impressive effort in yesterday’s column. First he spruiked his guest appearance as a reporter on Channel Seven’s Sunday Night, where he filed a piece on the development of a bionic eye. Next came this masterful effort:

“It is odd when the promotion of one book brings you face-to-face with a long-disappeared subject of another book, but so it was on Thursday night when I turned up at Ballarat’s Sovereign Hill to speak at a dinner on my book Eureka: The Unfinished Revolution, only to find my erstwhile biographical subject Nene King waiting for me.”

We’ll keep on the lookout for more examples as the silly season nears. — Matthew Knott

The Tele‘s Dyer photo effort. Many a giggle was had in the Crikey bunker this morning when we opened up The Daily Telegraph and found a picture of our own Glenn Dyer. It was the caption that got us: apparently Dyer is a Channel Ten newsreader. 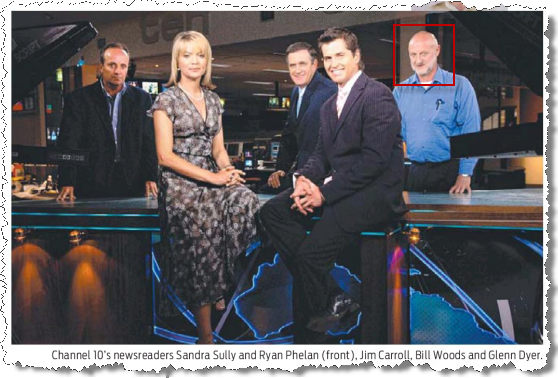 Although undoubtedly telegenic, Dyer assures us he was never a TV front man; he says the pic was taken around 2006 when he was a producer on Ten’s early morning news bulletin. To the left of Sandra “the survivor” Sully is former news and current affairs boss Jim Carroll, who left the network last year after disagreeing with Chairman Lachlan Murdoch about the network’s direction.

Front page of the day. Full marks to the UK Daily Mirror subeditor who dished up this front page effort. 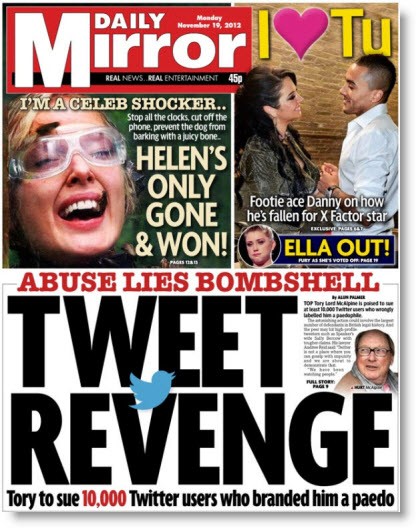 Conservatives can make the best case against another Middle East debacle

It’s probably worth noting that in the world of wingnuts, “anti-Israel” means against using Israel as ground zero in a thermonuclear war that will bring about the end of the world. To those who believe that heaven awaits on the other side of Armageddon, this actually seems like a good thing.