War by social media: ‘we’re coming for you Gaza!’

As the conflict between Israel and Hamas heats up again, Crikey intern David Donaldson traces war by social media.

If the flurry of activity on Twitter and Instagram is anything to go by, a new front has opened up in the re-heating conflict between Israel and Hamas. Just as unpredictable — though not as bloody — as its conventional war counterpart, social media is playing an increasingly important role in the Middle East’s most enduring public relations war.

Only minutes after assassinating the leader of Hamas’ military wing, the al-Qassam Brigades, the official Twitter account for the Israeli Defence Forces @idfspokesperson declared: “The IDF has begun a widespread campaign on terror sites & operatives in the #Gaza Strip, chief among them #Hamas & Islamic Jihad targets.”

The IDF has followed up with tweets announcing that “All options are on the table” and that they would be “ready to initiate a ground operation in Gaza” if necessary. Originating in the IDF’s two month-old “Interactive Media” branch, the Israelis’ tweets have been making liberal use of the #IsraelUnderFire hashtag and slick, shareable graphics and photos: 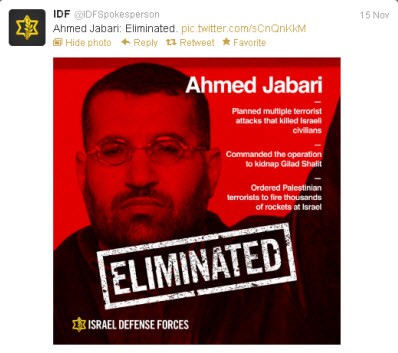 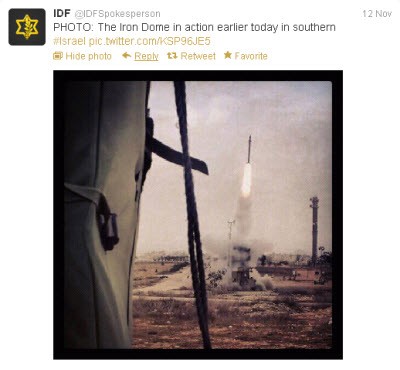 And Israel isn’t the only one using Twitter to its advantage — Hamas has been waging its own PR war. Responding to an IDF tweet warning Hamas militants not to “show their faces above ground in the days ahead”, Hamas’ account @AlqassamBrigade warned that Israel has “Opened Hell Gates” on itself.

Hamas has also been tweeting photos of those injured in Israeli attacks, claiming that the death toll so far sits at “19 martyrs including 6 children”. 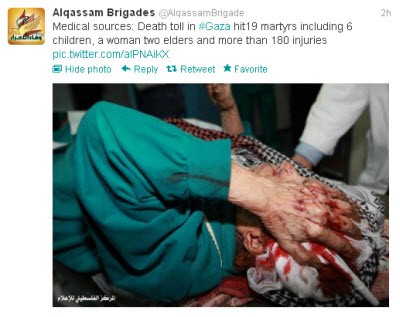 But while rockets are being fired in both directions, many of Israel’s young military recruits appear surprisingly unconcerned. Buzzfeed has documented the bizarre phenomenon of IDF personnel posting wartime photos on Instagram: 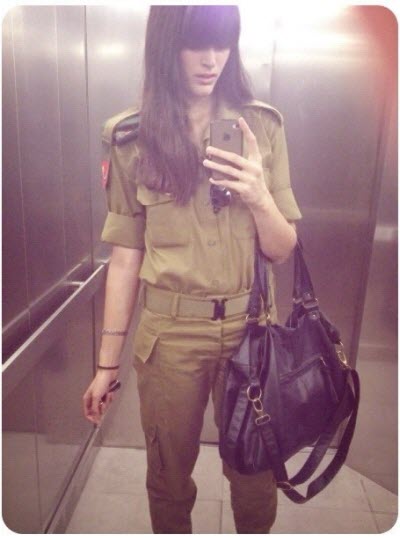 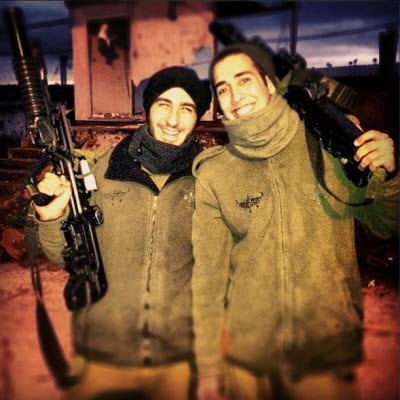 And an incident featuring the Twitter account of Israeli PM Binyamin Netanyahu has shown just how delicate and unpredictable internet diplomacy can be. Immediately after tweeting that he wanted to thank Obama “for his unequivocal clear sided support for Israel’s right to defend itself”, Netanyahu’s office deleted the tweet. Buzzfeed‘s Andrew Kaczynski managed to get a screenshot:

Attempting to understand why it was so promptly deleted, The Guardian speculated: “Some commenters have detected a note of sarcasm in the deleted Netanyahu tweet.” In the touchy world of international politics, it’s difficult to tell if the tweet represents genuine thanks or an effort to pressure the Obama administration into more overt support.

But The Guardian seems to think that there may be nothing to it, after all: “the tweet may have been deleted because ‘clear sided’ doesn’t really make sense; it’s ‘clear’ or ‘one-sided.'”

Rundle: attacking IS will bring the caliphate into being

How Mike Carlton got it wrong

The worlds largest open air prison i.e. Gaza has been under siege since the Israelis murdered 1340 Gazans including more than 300 children under 10 during its 2006 Cast Lead massacre.

One has to wonder why Israel would murder Ahmed Jabari when in fact he was the lead negotiator for a cessation of the current hostilities.

Finally, Prime Minister Gillard’s condemnation of the firing of rockets into Israel would have
some credibility if she had ever criticised Israel for its 6 year siege of Gaza resulting in the
area being nothing more than an open prison where infant mortality rates are among the highest in the world.

Every informed Middle East observer around the world knows exactly what Israel is doing here. To think that our major political parties HAVE to toe the US/Israel line with the Israelis just about to engineer another massacre, is pewkworthy in the extreme.

I inadvertently ‘liked’ the Israeli Defense Forces Facebook page and have been receiving these messages. I find them bizarre and do not really know what the message is. It’s quite surreal and infects a sort of video game feel to their messages.

Look at those brainwashed dolts… War is so glamarous, right?

Anyone think this is NOT a pretext for “finding proof” of Iran’s complicity and thus pressure Washington to ‘do summat ’bout it”?
BTW, those Gazan rockets are little more than flying pipebombs, bearing no comparison to US supplied jets raining down Hellfire and other missiles.

oops, that bold was only intended for the word ‘NOT’ in the first sentence – sorry for seeming to shout typographically.