The latest racist beat-up by A Current Affair has been exposed as a fraud by the good work of a local newspaper in Sydney. 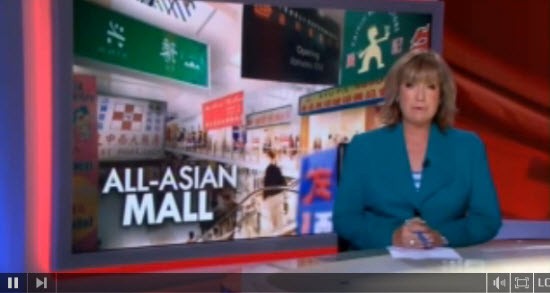 In one of the most racist A Current Affair stories we’ve seen (and yes, that is saying something), the story titled “All-Asian Mall” examines the apparent “Asian invasion” of a local shopping mall in Castle Hill.

Host Tracey Grimshaw introduces it as: “The battle between Aussie shopkeepers and centre management who are kicking them out to make way for businesses who directly target the suburb’s Asian population.”

“The Castle Hill mall was once an ordinary Australian shopping centre,” announces ACA reporter Ben McCormack. “But now it’s owners have decided it needs a makeover. An Asian makeover. Overnight the Aussie shopkeepers who have had their businesses here for for more a decade have been told they have to move to make way for other retailers.”

Pauline Hanson is even dragged out to say “I don’t like it” and calling on the Australian government to “please explain”. A supermarket, butcher, fishmonger and fruit shop all aimed at targeting the Asian market will be introduced in to the centre.

“Proud Australian” Hanson says she is “shocked and disgusted” by this unAustralian behaviour.

Apparently others are concerned the shopping mall changes are just the beginning and “it’s only a matter of time before the suburb becomes an Asian enclave”, declares McCormack, as pictures of restaurants and streets with Asian people fill the screen.

“No businesses have been kicked out of the centre and of the businesses that have moved, two are owned by Asians. One of those moved is the Chinese Medicine Centre.

“… Matthew Wright from Shelton’s Quality Meats said that while he was concerned about having competition from the new MD Meat store, he didn’t care whether the new stores were Asian or not.

“‘There have been Asian shopkeepers in this centre for a long time. From the bread store, to the Chinese medicine shop, to the florist.’

“While I am concerned about have competition from another butcher, I’m glad that this centre is finally getting a makeover.

“They also said in the report that my shop was being forced to move, which it isn’t.”

Now it seems ACA has returned to Castle Hill this morning (another story broken by Cauchi). When Cauchi tweeted the news, McCormack replied:

Stay classy McCormack. Cauchi replied that he’d not found the ACA reporter in the mall, but was happy to take him round to meet the retailers he’d interviewed. Stay tuned for the ACA follow-up …

What I can never figure out is how these old whiteys can tell the difference between an AUSTRALIAN, who has some family background from Asia, and an ASIAN. As far as I know, the only way to identify someone’s citizenship is to check their passport. Facial appearance, language skills and favourte food/sport/music/literature etc doesn’t tell you anything. This is what I can stand – instead of considering themselves fellow citizens, the immediate placing of the ‘other’ as somehow not Australian.

well at least they’ll get some decent food.

Good point, Neo – the “Asian” shopkeepers could be 5th generation Australians. It’s rather like those well-meaning people who want to get “young Muslims and Australians” together … d’oh!

Well done Alex Cauchi! Funny that McCormack bags him out on Twitter – Cauchi’s story is at least a story while by all accounts McCormack’s report was just a racist fairy tale.

The ACA story was as pathetic as McCormack’s Tweet. His macho profile pic is a worry.
Probably not the biggest beat-up Ben has cover either..