A 68-year wait for membership? It’s just not cricket

A Melbourne Cricket Club membership is the holy grail for any Australian sports fan. But the wait for entry is growing longer -- you might not live long enough to enjoy your exclusive seat. 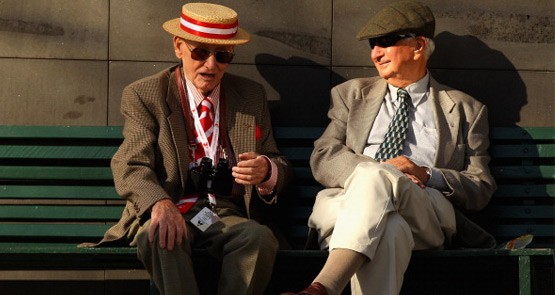 They’re the best seats in Australian sport. But prospective members of the hallowed Melbourne Cricket Club might die trying.

Join the logjam into the 173-year-old institution now and the 2080 Boxing Day Test might be the first opportunity you have to watch a game from sport’s most exclusive pavilion. The first eleven hasn’t been born yet.

The MCC committee is juggling the largest ever waiting list and fans are growing weary. The queue stands at 217,000 people, an increase of 19% from 2008. The club has a ceiling of 102,500 full and restricted members, whose bums rest on some of the best seats in the MCG house. A shake-up in membership could be coming.

Crikey understands some MCC members have been sharing concerns that new nominees may experience unrealistic wait times. The most recent inductees endured a 17-year wait to make it past the velvet rope as a restricted member (with no voting rights), but it’s those who sign up today who potentially face the longest wait.

Back-of-the-envelope calculations conducted by Crikey suggest an agonising 68-year wait in the outer for anyone who stumps up the $110 nomination fee today. That takes into account the intake rate of the past four years, with the backlog moving forward just one year from 1994 to 1995 since 2008.

MCC communications manager Shane Brown concedes the waiting list has become a major issue. Just 3000 lucky punters were inducted this year, which mainly consisted of “topping up” members who have lapsed or died. The last major intake of members was after completion of the MCG redevelopment in 2006.

“We’re looking at what happens if the number of people remained constant and we didn’t take any action,” Brown told Crikey. “At this stage it’s not at breaking point, but we’re trying to tackle it before it reaches breaking point.”

To those outside sport-mad Victoria, the MCC’s famous green seats may sound like the haunt of wealthy bankers or birthright of toffs. There are dress restrictions — collared shirts for men, neat casual for women — as well as requirements for members to act “honourably”.

But guaranteed admission to almost every sporting event at Australia’s most famous ground has made membership a hot item, regardless of class, creed or club. Around 10,000 new candidates sign up for the MCC each year, knowing they will wait decades.

And with annual fees of $609 and an “entrance” payment of $900, the MCC isn’t just exclusive — it’s also one of the most expensive sports memberships.

The waiting list has become such a tradition that many parents sign their children up when they’re born. This practice is something the Marylebone Cricket Club at Lords rejects, decreeing its candidates must be aged at least 16.

England’s most famous sporting club says it takes 18 years to join its ranks. Closer to home, the SCG currently expects a 12-year wait for membership, while the Victorian Racing Club is a more palatable four years.

Samuel Chappel, from Melbourne’s north-east suburbs, has been on the MCC list for around 12 years. At 22, he thinks he’ll be lucky to join the reserve by 30.

“There’s really no incentive for people to give up their membership,” he told Crikey.

“At the time of the redevelopment they said a lot of people on the waiting list were going to get swallowed up and it’s not happened. It’s gone in the other direction.”

Brown says it’s hard to put figures on potential wait times for those already on the list, but the club will try and do so when modelling becomes available.

“On one hand it’s great to have such great demand for a product, the challenge is to keep those people waiting interested,” he said. “We need to strike a balance between the length of time people have to wait with the amenity for current members.”

Brown doesn’t speculate on possible solutions, saying temporarily closing the list is an unlikely option. One recent change has been raising the nomination fee from $66 to $110, but that failed to slow down intake rates.

Increasing the amount of restricted members is another possible solution, but that would involve moving away from the mandated 60:40 split between full and restricted members. It’s likely any changes will have to be approved by members.

The MCC is also considering inviting patient fans on the waiting list to some games. The challenge has been tracking people down after more than 15 years.

don’t pu t your name down then

If you can tolerate the unrelenting advertisements the view is better on TV.

Capitalism’s normal way of rationing scarce goods and services is price. So why not start by doubling annual membership fees?

I don’t care if cricket tragics die waiting for limited membership. I have no interest in cricket and resent it when it is in my face on TV! Edward James