Fairfax and APN to merge? ... JuLIAR makes me vomit, says Liberal MP ... putting Australia on the map for CSG ...

Media merger on the cards? Are Fairfax and APN preparing to merge some or all of their assets? The strong word on the street is that the two ailing media groups are close to a deal, covering their New Zealand newspaper assets (between them the two companies own almost all the NZ newspaper industry), their Australian regional mastheads, and maybe a lot more. Both companies, who have watched their share prices hit historic lows recently, are believed to be desperate to be seen to “do something” to deflect the attention of their very angry shareholders.

Tax time boo boo. Now, we all know what it’s like when one forgets to carry the zero when doing one’s tax return, but the NSW government has really crossed the line in being out by $1 billion in its budget. Thirty-seven errors of more than $20 million each! A tipster has suggested that NSW Treasurer Mike Baird’s wife used to work for a major chartered accounting firm in the city and “perhaps she should be the treasurer”. Worth sending in a CV perhaps?

JuLIAR, we’re coming to get you!!! Victorian Liberal MLC Bernie Finn certainly doesn’t mince words on his political nemesis, the hated JuLIAR. As his Facebook feed shows, Finn feels that Gillard is “reviled”, out of touch with families because she doesn’t have one, should be locked up … Gillard even makes him vomit, apparently. According to Finn’s personal website, he just loves Australian comedy. And those who comment on his posts apparently think he’s just hilarious! 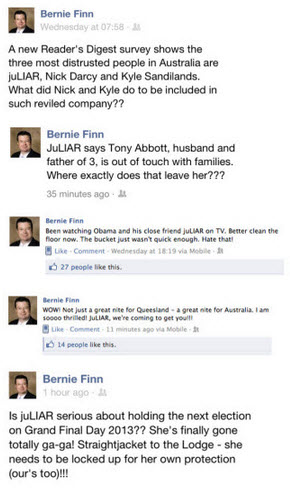 Crikey was alerted to these posts via this helpful tumblr. We went to Finn to ask if the posts were actually his, and if he thought they were appropriate for a member of parliament. His response:

“They seem to be. Most go back some time so I can’t be sure but there is nothing there I’d argue with. I say to my “critics” that I have absolutely no intention of becoming even half as boring as they are. My very strong suggestion is they get a hobby.”

Who dunnit? Seems Radio National has been consumed by trying to discover who wrote this anonymous story for Crikey. RN staffer Wendy Carlisle tweeted this suggestion of who the author might be … a certain recent, right-leaning addition to the network … I don’t call Australia home. Hats off to the eagle-eyed tipster who has rumbled a coal seam gas ad that was trying to spruik its Australian projects — by using what appears to be a US map. Take it away, map detective:

“One of our coal seam gas proponents, Australia Pacific LNG, has been buying a bit of media space lately. That would be US oil major Conoco Phillips, with the China Petrochemical Corporation (Sinopec) and the obligatory local content (Origin Energy). It’s just the usual full-page puff pieces about how focussed on social and environmental outcomes they are. What’s interesting is the photo-shopped background to the ads. That’s a contour map, but the contour labels are obviously over 4000 in altitude Now there’s no place in Australia that high — in metres — and we haven’t published a contour map in feet since the old inch-to-the-mile series mid last century. So where is this misty CSG heaven? Well, there’s maybe a clue in those blue creek lines, shown dash-dot-dot-dot to signify intermittent flow. That symbol has never been used in Australia, but it has long been standard on USGS topographic maps. Perhaps somewhere on the edge of the Colorado Plateau? And perhaps an Australian advertising agency would have been a smarter choice …” How come our local “shock jocks” Jon and Neil haven’t exposed the bigotry and perniciousness of this guy?

How come he sits in Parliament, when he espouses such vile philosophies?

How come we actually voted for him, pre-selection gone mad?

Sadly his past track record is equally damaging for the Liberal Party, but if Ted is the man we hope he is; something will be done!