The paper, the poll and the almighty ACT stuff-up

Ahead of the ACT election, The Canberra Times called it as an easy Labor victory based on its "exclusive poll". The poll was way out. So what went wrong?

Two days before the ACT election, The Canberra Times splashed with the results of an exclusive opinion poll: “Labor will hold power,” ran the front-page headline.

The Patterson Research poll tipped Labor would coast to victory with the help of the Greens, who would retain their four seats, while the Liberals would make little headway. Previously, some commentators and bloggers had argued it would be a close race as the Liberals gained traction and the Greens struggled. Those forecasts were junked. The poll set the result in stone before ballots were cast on October 20. Sportsbet paid out on a Labor victory — the day before the election.

There was just one problem. The poll was wrong.

The Liberals won more votes than Labor; the major parties tied on eight seats apiece. The Greens haemorrhaged votes and lost three of their four seats (see a comparison of the poll with the results here). The parties are now negotiating over who will form government, and while the most likely result is a Labor-Greens alliance there is a chance the Liberals could form a government.

The fiasco of The Canberra Times’ dud poll — the sole opinion poll of the campaign, in the territory’s sole daily newspaper — raises questions around the national obsession with polls, along with questions on the way they are conducted and reported on. Psephologists are scratching their heads, the ACT Liberals are fuming and The Crimes has gone very quiet.

ABC election analyst Antony Green told Crikey the poll was clearly wrong and pollsters and the paper had “egg on their face”. “Opinion polls should be published on the astrology page,” said Green (who, it should be noted, reported on the poll on his election blog).

The image below shows The Canberra Times election result prediction on the left (from October 18) and the actual result on the right: 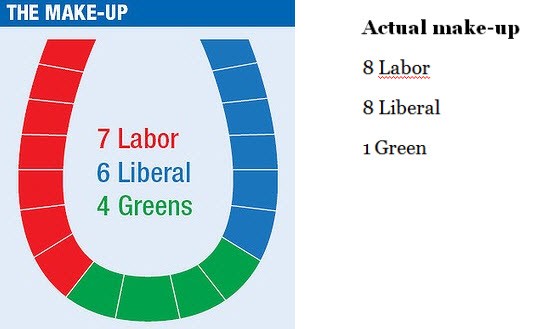 Some quotes from The Canberra Times on October 18:

So what went wrong? The random phone poll of 1203 people was conducted from October 11-14; Patterson says the data was weighted against ABS census figures. The undecided vote was 7-10%, and this was “allocated among parties and candidates using polling formula”.

Keith Patterson, managing director of the Patterson Research Group, told Crikey: “I can understand the queries about the ACT poll. It certainly raised eyebrows here as well, resulting in something of a witch hunt — but nothing was untoward.” Patterson emailed Crikey a Powerpoint on his company which states “Our Record is Pretty Good”.

Sources said that privately, Patterson has been saying he was not sure what went wrong, but had several theories. Some newspaper insiders reckon the Greens had a dud final week in the campaign — after the poll was taken.

Green was not so reclusive. He says to get the poll that wrong, “you’ve done something wrong methodologically”. The sample size and proportion of uncertain voters seemed workeable, he says, suggesting the problem may be that questions were not asked in a way that reflected the way people actually think in a polling booth.

It may be the poll failed to capture all options on the ballot paper, or named parties rather than individual candidates. Green says the survey results may not have been accurately weighted (i.e. tweaking the results to take into account demographic differences between the surveyed group and the population).

Polling experts told Crikey that Patterson Research may not be seen in the same light as the big players, Newspoll (The Australian) and Nielsen (Fairfax), who poll on politics frequently and agonise over methodology and weighting of results.

Green says the problem is not just the Patterson poll but the way the newspaper wrote it up, gave it prominence and assigned it certainty.

ACT Liberal leader Zed Seselja — who has been at war with the paper — agreed. “It was obviously spectacularly wrong, as was the analysis that went with it,” he told Crikey. “I’d be fascinated to hear their explanation. It certainly raises questions about The Canberra Times’ credibility … almost all their coverage was designed to steer people away from the Liberal Party.”

Seselja reckons the poll and its coverage may have cost the Liberals votes and sapped momentum from its campaign. But Green says it’s not clear whether a poor poll cost votes because Australians often warmed to the underdog.

Brace yourself for a Liberal whitewash, from east to west

And then there were none: ACT Lib moderate faces the chop

Poll Bludger: what Labor, Libs can take from ACT election

It’s not the first time a newspaper has got an election result very wrong. In Aug-Sept 1999, The Age wrote every day about the impending landslide re-election of Jeff Kennett, the only question was how big. In fact it was the election that saw Bracks take government with the support of 3 Independents.

1203 random poll participants hardly seems enough to form a result. Also goes to show that tweaking based on ‘demographics’ is not a simple task and fails to take into account many variants within those demographics.

Ha ha. Now is perhaps NOT the time to email Crikey a powerpoint stating “our record is pretty good”.

Statistically 1203 is more than enough. One Labor MLA made the same prediction as the Canberra Times at a dinner about 10 days prior to the election. So Labor polling was saying the same thing. ie the electorate wasn’t paying much attention and changed its mind in the final week. The “Make Labor Listen” effect kicked in, just like when Follett lost in 1995.

People routinely tell pollsters they will vote Greens, so they look like they have “politically correct” attitudes, and then vote for one of the “old parties”. In the UK, it was called the “shy Tory effect”, but it seems to also be becoming a “shy ALP effect’.