MPs Russell Broadbent and Judi Moylan look like being alone among the two major parties in continuing to argue that Australia will lose international respect and dishonour its obligations by excising Australia from its own migration zone.

Excising the continent. The Julia Gillard-run Labor Party does not have a principled bone left in its political body. This latest anti-boat-people move is one where the Coalition should stick with its principal opposition principle and just say and vote “No”.

Staying true to his values. At least two Liberal parliamentarians, Russell Broadbent and Judi Moylan are sticking to their principles. The member for McMillan and the WA Senator, survivors of that increasingly rare breed of liberal Liberals, were part of a four backbench MP revolt that saw John Howard as PM back down from a similar proposal to strip rights from asylum seekers who reach the Australian coast proper by boat. Now they look like being alone among the two major parties in continuing to argue that Australia will lose international respect and dishonour its obligations by excising Australia from its own migration zone.

Diversity at the Oz. Who says The Australian does not encourage a diversity of opinions? Take the Editor-at-Large today and the Foreign Editor on Monday : 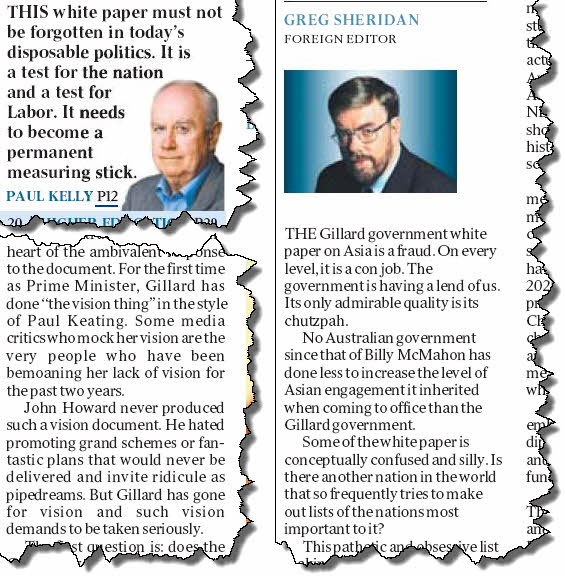 Putting opinion polling into perspective. Three cheers for the news sense of the international edition of The New York Times! One for cat lovers. There’s a new breed of curly haired cat. Give a welcome to the Selkirk Rex now officially being recognised as a fourth variety of cats with curls. Perhaps someone should send one to Kevin so First Dog will have a replacement for the recently dear departed Jasper.

A defence of radical architecture

Parliamentary poet Judi Moylan on being a political terrorist

How much longer can the Oz continue to run Greg Sheridan?

The high point being the ‘defining moment in Australian diplomatic history’ that was Tony’s last trip to Indonesia.

Is there anyone on the planet that takes this man seriously?

lloydois, I would say that for three quarters of the knobs (oops journalists) at the Oz…still they cater for an audience, ever shrinking though until one day they only pander to the extremities…