CVC chair leaves behind Nine disaster ... when a siege is actually a seige ... "Citizens Against Government Waste & Americans for Prosperity Foundation" ad ...

Phil Coorey flies to The Fin. The Sydney Morning Herald‘s highly-respected chief political correspondent Phil Coorey is leaving the paper after six years to join Fairfax stablemate The Australian Financial Review. Coorey, who appears regularly on Insiders, is widely regarded as one of the best news breakers in Canberra and boasts excellent contacts on both sides of politics.

“It’s just a new challenge and time for a change,” Coorey told Crikey this morning. “There’s no discontent with the Herald.” But his departure leaves a sizable hole at The SMH, which now needs a Canberra news hound to complement the analytical heft of Peter Hartcher and Lenore Taylor, and the humorous stylings of Jacqueline Maley.

The SMH and The Age have been sharing an increasing amount of Canberra copy over recent years, so it will be interesting to see if Coorey is replaced by a standalone SMH reporter or a cross-paper scribe. The SMH also recently lost national security correspondent Dylan Welch, who is taking up a job with Reuters, from its Canberra office.

Coorey, formerly political editor of Adelaide’s The Advertiser, will become The Fin’s chief political correspondent, a role that has been vacant since David Crowe left for The Australian in January. He’ll be working closely with AFR political editor Laura Tingle, who told Crikey last year she considers Coorey “the best political reporter in the Canberra press gallery at the moment”. — Matthew Knott

Random Penguin: closing the book. The parent companies of trade publishing houses Penguin Books and Random House — Pearson and Bertelsmann respectively — have combined to form the world’s largest book publisher, which will now be known as Penguin Random House. The official announcement came on Monday, following days of speculation after Peterson confirmed the two companies had been in talks.

The rumours sparked much hilarity on Twitter, with speculation as to what the new name might be — the particularly amusing Random Penguins (and the associated meme) being the favoured title, as well as Penguin House or even, wittily, PenguinHaus. But in the far more sobering official statement, the company will now be known as Penguin Random House, and the announcement has sparked discussions about the implications for the market, for publishers, for employees, authors and agents. There is talk of the profits and the losses in the age of digital publishing, of years until the acquisition will be over and of the share of the company each will receive.

I’m more literary than business-minded, and talk of mergers and acquisitions simply bring to mind Patrick Bateman’s quip about “murders and executions”. But what I wanted to talk about was something smaller, a more affectionate but no less deeply felt loss, as a reader of Penguin books for a long time. “The myth is when you combine two great companies you get one even greater company,” publisher Andrew Franklin wrote in The Guardian, predicting Penguin will lose its separate identity: “This will end up a complete takeover of Penguin.” It would be sad indeed to lose the identity of Penguin Books. — Bethanie Blanchard of Liticism (read the full story here)

CVC chair leaves behind Nine disaster. Don’t mention the war? There was nary a mention of the Nine Entertainment disaster when CVC Capital Partners revealed its long-time chairman Michael Smith was retiring. The loss will be close to $US2.7 billion for its funds.

Nine is still listed on the CVC website as part of its portfolio. Even though the deal to convert all that debt to equity has seen CVC lose Nine Entertainment to US hedge funds Oaktree and Apollo, it hasn’t gone through yet as the final structures and other details are nailed down. The list of news announcements, including asset sales, on the CVC website has yet to carry a statement confirming the change of control at Nine.

One of the final details still to be ironed out is the final level of debt Nine will carry, which will be between $500 million and $800 million. This will be contrary to statements from Nine boss David Gyngell and the company last month that Nine will be debt free.

That “debt free” status looks like being a temporary situation, judging by media reports this week about the negotiations over how much debt the revamped Nine Entertainment will be carrying once the change of control happens. There are no free lunches with hedge funds, just as there are no free lunches with private equity. They all extract their cash, one way or another. — Glenn Dyer

When a siege is actually a seige. After reading today’s Courier-Mail, eagle-eyed veteran subeditor Terry Towelling proposes yet another new word for dictionary updates: 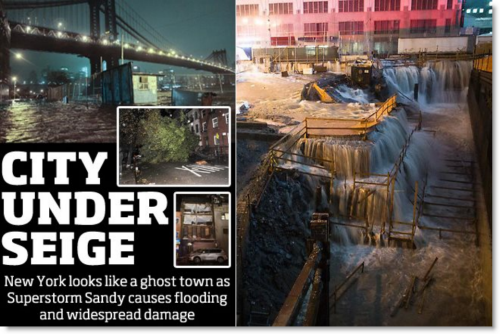 Video of the day. The “Citizens Against Government Waste & Americans for Prosperity Foundation” — petrified by US debt “owed” to China — offers this Communist scare campaign to the US election campaign … 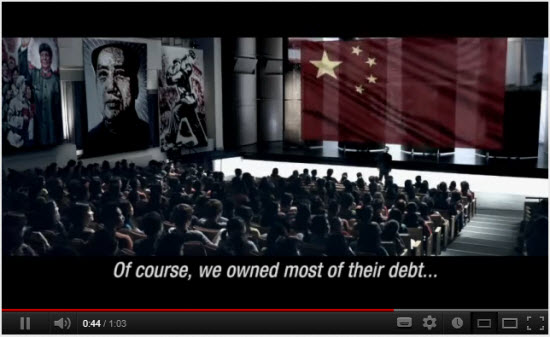 Front page of the day. The Jersey shore took the brunt of Sandy yesterday. The Tretonian, from state capital Trenton, heralded the storm’s arrival … 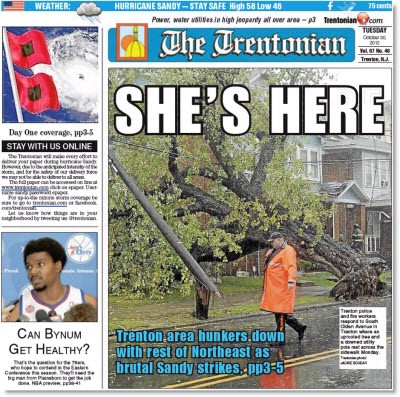 Bloody hell! What the heck is going on with Fairfax. The SMH loses Coorey and keeps Hartcher???
Plus why would the AFR need another political hack, when they’ve got the best in the business, Laura Tingle?
“Interesting times”, but I wouldn’t want to be a shareholder, or a subscriber, to the chaos that is Fairfax right now.