Did climate change create the ‘Frankenstorm’? It didn’t help

Global warming may not have caused the Frankenstorm but it is loading the dice so the devastating flooding just witnessed becomes a lot more likely in future. 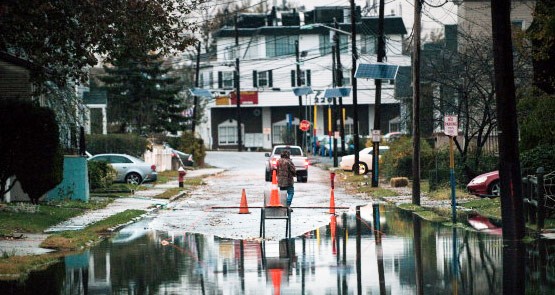 In reading through press interviews with various assorted climate scientists and meteorologists, none were suggesting a strong link between global warming and the formation of the Frankenstorm. This storm’s enormous size was a product of an unusual confluence of weather systems forming a hybridised storm.

Tropical hurricane Sandy from the south was pushed towards land through a high pressure ridge over Greenland, merging with an early winter storm coming from the West and a blast of Arctic air from the north. It’s potential to cause flooding was then amplified by the fact it hit during a full moon high tide leading to extremely high storm surges.

Climate scientist Kerry Emanuel of the Massachusetts Institute of Technology, who has extensive experience in studying tropical storms, said in an interview with Slate:

“My profession has not compiled a good climatology of hybrid events. We have fantastic climatology of hurricanes, but we don’t have a good climatology of hybrid events. It is really because we haven’t done our homework. We don’t have very good theoretical or modelling guidance on how hybrid storms might be expected to change with climate … Which is not to say that they are not going to be influenced by climate, it’s really to say honestly we don’t know. We haven’t studied them enough. It’s not because we can’t know, it is just that we don’t know.”

This odd confluence of events could simply mean the Frankenstorm was a product of pure bad luck. But it doesn’t mean there aren’t some findings from the climate change research which would be well worth bearing in mind as we survey the damage from this extraordinary storm.

While trying to precisely nail down how climate change might affect the frequency, severity and location of severe storms is incredibly tricky and still subject to considerable uncertainty, there are a few fundamentals associated with a warmer planet that suggest we should be concerned.

Firstly, basic physics suggest that a warmer atmosphere can hold greater amounts of water vapour. The consequence according to the IPCC is that it is “likely” (66% or greater probability) that the frequency of heavy rainfall events will increase, meaning storms have greater chance of causing severe flooding.

Secondly, physics dictates that a warmer planet will mean land-bound ice will melt and seawater will experience thermal expansion — this means sea levels will rise. We can be reasonably confident that the degree of sea level rise will be substantial if the current rate of warming is sustained for a long period. But there is considerable uncertainty about how fast the sea level will rise due to inadequate understanding of the melting, break-up and movement of ice shelves.

Nonetheless according to the IPCC it is “very likely” (90% or greater probability) that mean sea level rise will contribute to upward trends in extreme coastal high water levels in the future. Large segments of the world’s population do not live all that far above sea level (for example New York), so even small rises of 50cm are potentially significant.

Thirdly, it is accepted that ocean temperature is the key determinant of the power behind tropical cyclones/hurricanes, with higher temperatures providing more power and therefore stronger winds. According to the IPCC it is “likely” the maximum wind speed of tropical cyclones will increase (although not the frequency of cyclones).

When you combine all three factors above you end up with a triple whammy. The sea level rise means that larger numbers of people are vulnerable to inundation by the sea. In addition the stronger storm winds act to push the ocean further up against the coastline as a higher storm surge on top of the sea level rise. And lastly many human settlements will simultaneously have to deal with flooding rains and rivers.

To illustrate, the height of Brisbane’s 2011 floods were not simply a function of the river’s flow, but also the tide. Adding a storm surge of 3 metres as was experienced in parts of New York, on top of a flooding river is a recipe for disaster for many regions.

No one could say with any credibility that global warming caused the Frankenstorm. But what we can say is that global warming is loading the dice such that the devastating flooding and ocean inundation we’ve just witnessed becomes a lot more likely in the future.

In 10 years Japan will cut coal's 33% share of its energy production to 26%. That's one seriously big crisis for Australian coal exporters.

Australia needs the US to lead concerted international action on issues like trade and climate. A re-elected Trump administration is unlikely to deliver either.

“…a product of an unusual confluence of weather systems…”

Whilst few scientists will claim any single event as proof of Cliamte Change, the increasing number of unusual events suggests something is amiss.

This particular unusual confluence of weather systems may be due to Climate Change:

Kerry Emanuel of the Massachusetts Institute of Technology had better watch herself if the US authorities take a leaf out of Italy’s book. “We have fantastic climatology of hurricanes, but we don’t have a good climatology of hybrid events. It is really because we haven’t done our homework.”

Guilty as charged. Bailiff, clap her in irons!

Very few climate change deniers in the insurance industry. When there is potential to erode the bottom line, they rely on the statistics and the weight of facts.

Agree beachcomber. A good case has been made here for a link of some degree: http://green.blogs.nytimes.com/2012/10/30/did-global-warming-contribute-to-hurricane-sandys-devastation/?ref=science
Caution is required but more extreme weather events have long been predicted under climate change scenarios.

Also as microseris states, the insurance industry rely on statistics and the weight if facts. Risk aversion drives their stance also.

Climate will never cause weather.

Then why would we say
The Long term trend in weather causes weather ?

The Long term trends in Weather indicate the system is being forced by human activity, despite other natural cycles. This is not in doubt. What is certain is that vested interests will use human frailty and misinformation to protect there position, either that or they are simply exposing there ignorance.

Weather is so chaotic that it is only in its long term trends that we can extract information about long term change. That is climate change.