Virgin Australia will swallow low-cost operator Tiger, the company has announced, in a deal that takes the fight up to Qantas like never before. 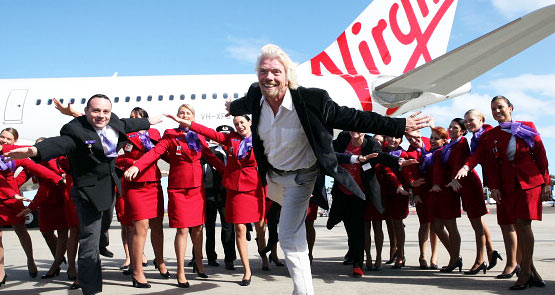 Having totally shocked the Australian airline sector this morning by buying control of Tiger Australia, Virgin Australia’s CEO (and former Qantas executive GM) John Borghetti said there was “more” and apparently “a lot more” to come.

“This is simply another step, with more steps to come,” Borghetti said, “but it is a step that gives us scale.”

In fact it was several steps, and very big step up’s in scale, in what Borghetti described as the mid point of his five-year plan for Virgin Australia.

When all the approvals are in place between mid-November and early March, Virgin Australia will not just have a second brand low-cost carrier in Tiger to take on Qantas’s Jetstar brand, but will have taken over and Virginised all of the operations of Perth-based Skywest, radically lifting its participation in mining industry fly in/fly out charters and regional aviation, and gaining a mixed fleet of A320s and Fokker F100 jets as well as assorted turbo-props.

Borghetti said: “We will be sustainably competitive in scale in all sectors of the market from full service to low cost, and we will have the support of strong shareholders.”

The deals for control of Tiger, which will continue as a strictly separate low-cost brand, and Skywest, are funded from the $105 million sale of 10% of equity in Virgin Australia Holdings to Singapore Airlines which was also announced this morning.

Borghetti told analysts the deals announced were cash-flow neutral because of the equity sale to Singapore Airlines, which will join Etihad (10%), Air New Zealand (20%) and Richard Branson’s private company, Virgin Holdings (26%) on its register.

The joint ventures or alliances already in place with Singapore Airlines over Changi, Etihad over Abu Dhabi, Air New Zealand (to, from and within NZ) and Delta, to and within the US in association with Virgin flights to Los Angeles, form a very comprehensive network in competition with the Qantas (approval pending) partnership with Emirates, and its major trans-Pacific alliance with American Airlines.

Virgin Australia plus Tiger Australia will develop or expand integrated growth paths with the Singapore-controlled Tiger franchise at Singapore’s major Asia hub airport at Changi, and naturally, those links the Singaporean Tiger has through its substantial equity in separately branded low-cost carriers in Indonesia and the Philippines, two huge markets where Jetstar has no home-based presence.

While Qantas has set up a hub at Singapore which emphasises low-cost connections onto its Jetstar franchise, it has no premium or full service partners for comprehensive services beyond Singapore. This is an obvious weakness in the current Qantas strategy for Asia, but also obviously one that it will do everything it can think of to fix.

The bottom line is that Virgin Australia is now chasing Qantas all over the map of the world, and offering both premium and low cost options where Qantas (through Jetstar) is only able to offer the latter. At present.

Domestically, Virgin Australia becomes a much-strengthened entity in association with Tiger, as well as in terms of offering greatly expanded regional flights, resources industry flights, and international connections to all points abroad, except Japan, which may well be a future step, and to southern Africa and South America.

Borghetti alluded to mistakes Qantas had made with Jetstar, saying “we have learned what not to do in a two-brand strategy” and that Tiger would remain true to its business model, which would not be diluted in any way. “We have to keep Tiger distinctly separate in its brand and consumer expectations,” he said.

Sounds like kiss your knees goodbye will continue to be the lot of big Australians crammed into Tiger’s tiny seats.