Time for a Sandy Smoothie before Frankenstorm hits

New York City is in lockdown for Hurricane Sandy. But the city that never sleeps can't shut down entirely -- "Sandy Smoothies" and $85 gumboots are out on sale, reports Alice Brennan from NYC. 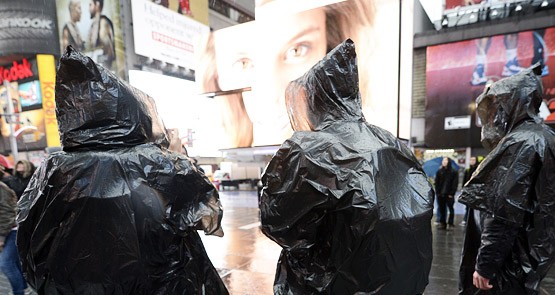 City workers swept the wet, deserted streets of New York early Monday morning as the city boarded up its windows against Hurricane Sandy.

While some intrepid couples in bright rain jackets and gumboots took stimulating strolls along the East River greenway, the park (normally full of picnickers and wedding parties) was empty. As were the boutique cafes and supermarkets, so packed the day before with panicked shoppers rushing to buy their comfort provisions.

New York, the hustling metropolis where stroppy business types and eccentrics push past each other to get to somewhere very important, ground to a screaming halt. The 8.5 million people who use the sprawling subway each day: immobilised, forced to stay put. Even the New York stock exchange was shuttered, for the first time since 2001.

But as the transport system shut down and businesses closed their doors, mayor Michael Bloomberg ordered the compulsory evacuation of 375,000 residents in low lying areas. That meant enclaves of activity popped up in schools, halls and other makeshift emergency shelters. Bars put out signs with half price beer and “Sandy Smoothies” — one read “Sandy Baby: Come beat this hurricane, board up and drink beer with us”. The local 99c store, dealing with a rush on flashlights and wet weather gear, upped their prices. How much for one small torch and batteries? $26.50. What about a pair of gumboots? $85.

“I’d rather have me some wet feet,” huffed one woman as she stormed out of the crowded shop. Wall Street might be under water, but the equally unregulated Frankenstorm economy was moving in to fill the gap. On the ever reliable Craiglist, tickets to popular Broadway productions were reduced by at least 50%, Mom and Pap businesses advertised Sandy sandbags and pre-emptive yard clean-ups, and limo services offered a smooth ride through the torrents.

Thanks to last year’s hurricane Irene, the city is much more prepared this time around and the residents more relaxed. One police officer on Atlantic Avenue, Brooklyn suggested it might be to their detriment. “We’re finding that a lot people aren’t evacuating as they should be,” he said. “Irene passed with minimal drama here in New York, so they’re sceptical about how dramatic Sandy is gonna be.”

Only about 100 people and their pets escaped to a Park Slope high school on Sunday night. During Irene at least 1000 people from Red Hook and the Rockaways piled into the same space.

But Sandy is already shaping up to be a much more ferocious storm, or storms, than Irene, and she hasn’t even made landfall yet. At low tide on Monday morning artsy Red Hook, once a busy freight port, had sections already under water, as were parts of Battery City in the lower Manhattan financial district.

And authorities are getting tough. Housing management locked Columbia University professor Bob Shapiro out of his high rise in Battery Park City. He heeded warnings and evacuated to a hotel uptown, but for residents who refused to leave they were emailed this warning: “If you plan on leaving please do so before noon otherwise you will need to shelter in place and will not be able to exit the building”.

The email added that emergency personnel would not be entering evacuated areas at all, as Bloomberg had previously warned. “That means no fire, police or ambulance,” the email read.

Shapiro, although relieved he’d got out in time, was battling the media hype. “Midtown is drizzling and only a bit windy. It hardly feels like a major disaster may occur even elsewhere in the city,” he told Crikey. “We’re just hoping this will all settle down in 24 hours and we can return home by Wednesday.”

But as Sandy pounded the US coast and winds picked up in New York, politicians busied themselves on how to manage what could be The Perfect Storm. Both Romney and Obama made some hefty schedule changes rerouting and cancelling appearances.

The stakes are higher for Obama though — the President needs to strike the perfect balance between crucial campaigning and proving he can fulfil his official role as a leader. He flew back to the White House on Monday afternoon to monitor Sandy’s progress and assign emergency services as needed.

“Everyone is watching the TV, so campaigns that are on the air with ads are getting maximum viewership,” Obama senior advisor Jamie Fox told Crikey. “Obama will control the news for critical days before the election, which will allow him to display his presidential prowess. This will give Romney no opportunity to attack him.”

Romney might need some disaster management of his own. He spent much of the morning deflecting attention from his 2011 call to privatise federal emergency relief. He told Larry King it was “immoral” to spend money on disasters rather than deficit reduction. When asked directly whether disaster relief should be cut, Romney responded: “It is simply immoral, in my view, for us to continue to rack up larger and larger debts and pass them on to our kids, knowing full well that we’ll all be dead and gone before it’s paid off. It makes no sense at all.”

For the 60 million people in the US, or almost 20% of the population, who are expected to suffer under Sandy’s destruction over the next week and who will be clamouring for electricity and flood relief, that might be an unnerving statement.

Although this climatic event continues to cause devastation for thousands of lives as I write this. The super-storm inadvertently presents President Obama with an opportunity to display his leadership skills to the American people. Although there are no guarantees he’ll be re elected if using former Premier Anna Bligh as a precedent.

It does not matter what Obama says. It’s what he does that matters and he has proved himself to be a fraud like nearly all the other corporate politician in America.

Australia is no better.

Nice for the Mittbot to clarify his priorities – screw the common weal, it’s the bottom lines wot’s important.
But are there enough functioning neurons evenly distributed amongst the elctorate to note this?

It’s really time Americans woke up (although I doubt they will) and realized there are basically only very small differences between Romney and Obama and these are to do only with personal liberties. As far as foreign policy and subservience to big corporations and the banks are concerned it’s chalk and cheese.

The incessant wars, Israel, Haiti, Cuba, Latin America etc etc are part of the entrenched status quo pushed by both parties. Both too are beholden to big banks, big oil, the health care/pharmaceutical lobbies and others.

These are the issues that confront the world and between them threaten our so-called civilization and there is precious little chance that either candidate will put any real effort into addressing them.

Climate change has been ignored by both candidates in this campaign and although the causes of Sandy and other record climatic events are now pretty well certain I would eat my hat and more if any serious effort were made by either of these two corporate functionaries to deal with it.

Voting the lesser of two evils is still a vote for evil and there are in America, as there are here other parties/candidates who would at least be serious in tackling all the problems facing our countries and our world (and I don’t mean by privatizing it).

Democracy Now as well as RT USA have both done their best to expose these other candidates to the public by holding debates and interviews with them. RT USA will hold one on 5 November between the two “winners” of a previous four candidate debate. This debate (between the Green and Libertarian candidates) was supposed to be today (30 October) but has had to be post-poned because of Sandy.

Interesting points.
Ian you seem knowledgeable in this area…
Given the fact people move beyond apathy and cast their votes,the newly elected president will be inheriting a massive clean up bill from Sandy. This adds to the existing US financial problems Mitt Romney has used to campaign.
Maybe off topic but do you have any thoughts on The US Centrist Party?