Richard Farmer’s chunky bits: poll dancing in the US

Examining the current presidential polls in the US, Japan's enormous deficit (and deadlocked parliament) and other political views from around the globe.

So you think the polls help you. If you have worked out yet whether you believe yesterday’s 50:50 Australian result from Newspoll or the Coaltion’s 54% to Labor’s 46% reported by Essential, then have a go at this lot from The New York Times this morning: 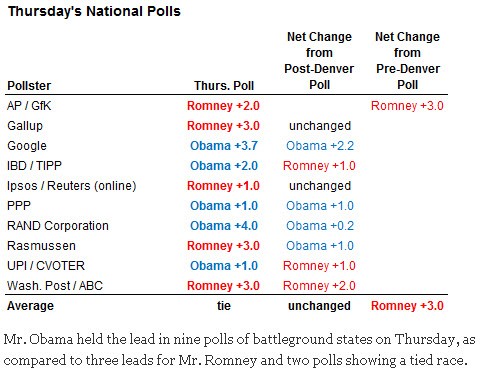 Just a little matter of 7.7 percentage points between the highest and the lowest.

I’ll stick for my opinion with the Crikey Election Indicator, whose probabilities are taken from what three of the largest markets (Betfair, Iowa Electronic and Intrade) are showing. 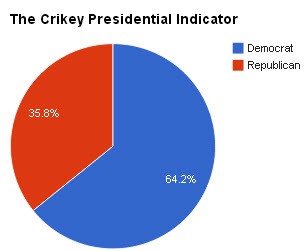 A deficit to really worry about. Chastened by those prime ministerial remarks about the media not paying attention to Asia, some news from Japan. Prime Minister Yoshihiko Noda warned yesterday that the day-to-day functions of government were in danger of seizing up unless deadlocked parliament passes a new debt financing bill. The Opposition is refusing to cooperate until Noda announces a date for a new election. The budget deficit is currently running at 10% of gross domestic product (GDP) with total government debt now 245% of GDP.

Not just in Sydney. Prominent racing identities have made their way into Thai politics where the racetrack was the location of a major anti-government rally at the weekend. From the Bangkok Post: 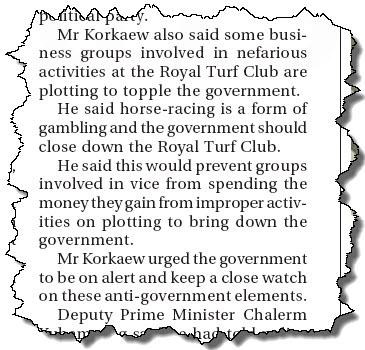 So that shows the Australian polls have an even bigger 8 point differential?