In the BBC (as in the ABC) there is a powerful taboo forbidding one director from interfering in the operations of another, writes Jonathan Holmes. Plus, Dennis Shanahanigans in The Australian.

Holmes: BBC boss’ excuse is sound. Hard though BBC director-general George Entwistle’s incuriosity over the Jimmy Savile scandal may be for outsiders to understand, to those who know the BBC culture it isn’t. His remark that “I absolutely did not want to do anything that demonstrated excessive interest” makes perfect sense.

In the BBC (as in the ABC) there is a powerful taboo forbidding one director from interfering in the operations of another. That’s especially true of news, whose operations are protected by a Chinese wall from other divisions.

The BBC has many interests — cultural, commercial and bureaucratic — that might be impacted by the news division’s operations. For example, in this instance, not only BBC1’s Christmas schedule, but the reputation of one of its greatest stars. For the director of vision to have started asking too many questions about an investigation by the Newsnight program into Savile would have been seen as a major no-no within the broadcaster.

(It’s for similar reasons, by the way, that Media Watch has always been produced by the television division of the ABC, and reports to the director of TV, not to the director of news. Since most of our criticisms of ABC output are directed at news programs, it was thought that to place it within the news division would have posed far too many conflicts of interest for the director of news.) — Jonathan Holmes (read the full story here)

Hadley pinged for privacy breach. 2GB shock jock Ray Hadley has been found guilty of breaching the commercial radio codes of practice for reading out the name and address of a listener on air while berating him. Last November, Hadley blasted a man who had written a letter wishing death upon Alan Jones as a “lunatic” before identifying him and his home street address.

The Australian Communications and Media Authority has now found that this breached privacy provisions in the Commercial Radio Australia Codes of Practice. “The broadcast of a person’s name and address without consent is a breach of the privacy protections under the codes,” ACMA chairman Chris Chapman said in a statement this morning.

Poll Shanahan-igans in The Oz. It’s quite a feat to argue that a Newspoll which saw the Coalition’s primary support plunge from 45% to 41% (leaving the two major parties deadlocked on 50% on 2PP) would give Tony Abbott some “comfort”, but Dennis Shanahan has managed it. Shanahan writes in The Australian today that the misogyny wars have “delivered a back-handed vindication for Tony Abbott”.

Just to be clear, that’s Tony Abbott who is down 34-45% as preferred PM to Julia Gillard, Abbott whose personal support fell to 30% and whose dissatisfaction rose three points to 58%. If this is “comfort” and “vindication” for Abbott, we’d hate to see what a bad poll looks like.

Shanahan’s claim rests on a convoluted argument that 39% of those polled think Abbott has treated Gillard in a s-xist manner (compared to 45% who think he did not). As Shanahan points out — and we’re not quite sure how this helps his case — more women thought Abbott had been s-xist (43%) than not (41%). So: four out of 10 voters think Abbott has behaved in a s-xist way, and among women and those aged 35-49, the most common view was that he has been s-xist. And that’s “vindication”?

Video of the day. A time-lapse video from NASA showing the development of former-hurricane-now-post-tropical-cyclone Sandy. 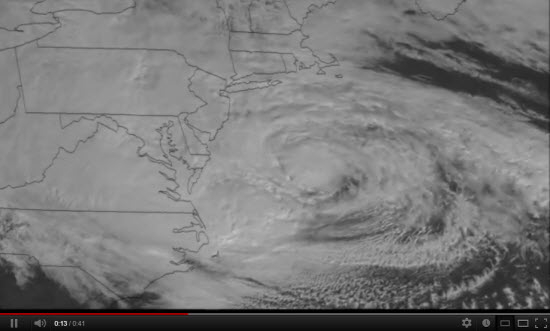 Front page of the day. As always, the New York Post remains calm and rational. 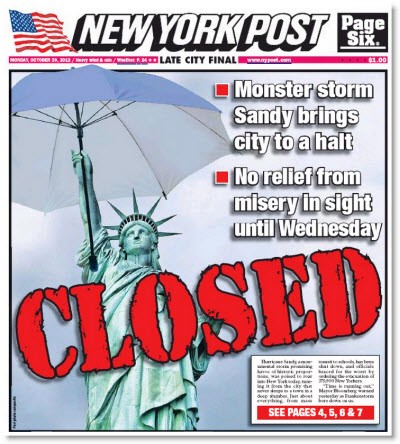