Italy's former PM Silvio Berlusconi had been sentenced to jail -- yet he's already discussing his political comeback. And he's got some supporters, writes Josephine McKenna from Rome. 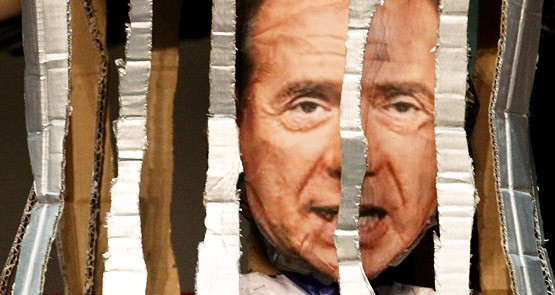 There it was in black and white. Headlines around the world screamed “Berlusconi jailed for four years” on Friday as long-time opponents shamelessly popped champagne corks outside the Milan court where the sentence was pronounced.

Italy’s former prime minister had been found guilty of tax fraud and banned from holding public office for five years. After more than 2500 appearances at over 30 court cases since Silvio was first elected in 1994, here was a sentence that might stick.

The court found that the billionaire media mogul had artificially inflated the price of US distribution rights using offshore companies to sell them back to his Mediaset empire while skimming off the profits and avoiding taxes. He and 10 other defendants were also ordered to pay 10 million euro to Italian tax authorities.

Was it all too good to be true? Apparently.

Despite a damning assessment from Judge Edoardo d’Avossa who said there had been “a very significant amount of tax evasion”, the sentence was immediately reduced to one year under a 2006 amnesty law. The former leader can now pursue two stages of appeal before the verdict is enforced and the statute of limitations is likely to kick in next year.

“He will not be convicted,” Sergio Fabbrini, political science professor and head of the school of government at Rome’s Luiss University, told Crikey. “This will take some time, probably years. This is the first step of a three-step procedure.”

Like the images of those bikini-clad women who regularly dance across Berlusconi’s commercial TV channels, the sentence seemed to evaporate as soon as it was aired. Plenty of Italians rolled their eyes and said he would never serve time, while a few simply longed for his return.

“He’s a victim, a victim of the judiciary,” said Alfredo, who sells fruit and vegetables six days a week in a piazza in central Rome. “Things were a lot better economically when he was in office,” his son Marco added.

Maybe. But that kind of sentence would certainly be the death knell of any other political career, especially when he is still fighting charges of paying for s-x with an underage pr-stitute.

Instead the 76-year-old “bunga bunga” king remained defiant and he called a media conference on Saturday to show he had no intention of reducing his political profile. In fact he went one step further, saying he may use his numbers to topple the Monti government which he accused of creating a “spiralling recession”.

Just two days before Friday’s court decision the mogul had announced he would not run in elections scheduled for spring 2013 as the leader of his People of Freedom (PdL) party. Now he said his centre-right party — the largest in Parliament — would decide whether to end its support for Monti and provoke a snap election. “In the next few days, we shall decide with the senior members of my party whether to withdraw confidence from the government or, given the closeness of the end of the legislature, leave it to work out its mandate,” he said.

Berlusconi’s opponents were horrified — but so too were his allies. Fabrizio Cicchitto, head of Berlusconi’s PdL party in the lower house warned a government crisis would cause an “explosion in the bond spreads’, while former foreign affairs minister and PdL member, Franco Frattini, stressed there was “continuing support for the government”.

Monti, the dour academic appointed when Berlusconi was forced out a year ago, was initially silent but on Monday said he felt no threat from his predecessor as he emerged from talks with Spanish Premier Mariano Rajoy in Madrid. “We were asked to make a contribution in a difficult moment for this country. You cannot call something a threat that would take nothing away from us,” said Monti.

Berlusconi could still muster the numbers within the PdL and his disgruntled coalition partner the Northern League to bring Monti down but experts say he no longer controls the party he created. And this is perhaps the most significant change even though his economic clout should not be underestimated.

“For the first time you now have people inside the party saying they don’t want to follow him,” said professor Fabbrini, author of a book about Berlusconi’s unique interpretation of power called Addomesticare il Principe (Taming the Prince). “They fear they will not be re-elected. I don’t know he can control the party in the way he thinks. Monti also has a popularity level of around 60% in Italy even after the tax increases and cuts.”

Corriere Della Sera’s respected columnist Sergio Romano said Berlusconi had the right to do battle but warned: “If his party wants to be a national political force, it must distance itself from its founder.”

Apart from the dire economic situation, Berlusconi and other leaders should be eyeing the dismal 47.4% turnout in the weekend’s regional elections in Sicily — down from 66.7 % in 2008 — as a worrying sign of the disillusionment enveloping all the major parties before anyone considers a national poll.

Insiders say this tycoon is all about the deal — whether it’s political or financial — but he may be reaching a point where the voters just ain’t buying it.

Berlusconi the ‘ATM’, and living in the land of ‘Pinocchio’…

Most Australian reporting about Italy is quite poor, and invariably sourced through London, but this is a good article, balanced and accurate. It is ironic that PM Gillard said the other day that we have too much eurocentric reporting in Australia and cited Chancellor Merkel as a case in point, ironic because it is precisely the euro crisis that has exposed the London-centric interpretations of the EU that dominate print, digital and broadcast media in this country, as if our interests are identical with Britain’s. Britain, love it though I do, does not equal Europe. Ironic because even in “progressive” media like the Guardian/Independent and BBC euro-skepticism is evident, not to mention the out and out EU haters in some other parts of the media. Australian needs its own, independent, and direct interpretations of Europe. As far as Berlo is concerend there is further positive news, his party is fragmenting around him, and the results of the Sicily election mentioned in McKenna’s article have confirmed the (openly gay mafia fighter) Rosario Crocetta has won the governship, and the grassroots online fuelled 5-Star movement led by comedian Beppe Grillo is the biggest party. This is a dramatic loss of Berlusconi, in 2001 his party took all 61 seats there. Crocetta’s sexuality was discussed, by himself and others, during the campaign and before in his role as mayor of Gela. He cites a similar position, Nichi Vendola in Puglia, like Crocetta a leftist, Catholic gay man, as presaging some deeper cultural changes of several fronts.

It would be nice to see the government repeal those reported laws passed under Berlusconi’s patronage – that prevent septuagenarians being sent to gaol.

Joseph, I agree with you about the London filter on our European news. Thanks for your comments on this clarifying article.