Stressed staff on News Limited's Adelaide Advertiser are ruing the introduction of a new league table singling out their individual journalistic achievements by editors.

News Limited is preparing to roll out Moneyball-style journalist rankings across the country, as editors on the Adelaide Advertiser and Sunday Mail launch a “Brownlow Medal” league table to track individual success.

The Darwinian detour into quicksand has shocked seasoned hacks. Even senior News executives remain sceptical given the propensity of the damaging internal assessments to leak to other media.

In the full “Between the Lines” report compiled by Advertiser day editor Paul Ashenden and obtained by Crikey, journalists and photographers are singled out for their popularity over the preceding week. The missive “will celebrate our achievements of the past seven days and take a look at some of the things we need to look out for”, Ashenden writes. But newsroom hearts sunk when the chilling divide-and-rule effects became clear:

“We will also introduce two new Brownlow Medal lists, in which votes will be awarded on a 3-2-1 basis for reporters and photographers whose work features on Pages 1,3 or 5 of The Advertiser and Sunday Mail.”

Sitting pretty at number one on the charts is political reporter Daniel Wills, who achieved three front pages and two page-five stories for a total of 11 votes for the week ending October 22, followed by political editor Brad Crouch with six votes. Investigations editor Bryan Littlely and education ed Sheradyn Holderhead were in a tie for third at five votes apiece. 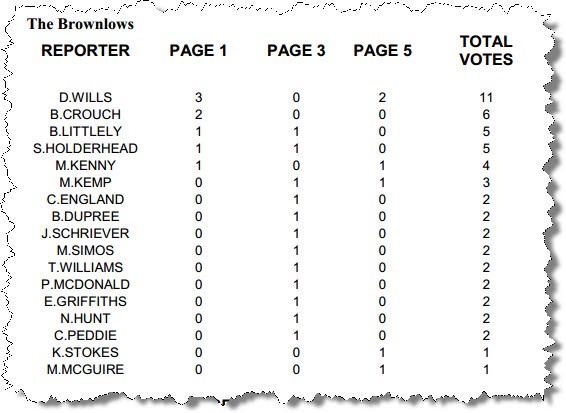 A News Limited spokesperson, Stephen Browning, told Crikey today that staff are “not judged in any way shape or form by such methods”. But Michael Gawenda, former editor of The Age and a researcher at Melbourne University’s Centre for Advanced Journalism, says the initiative was “a load of crap”.

“I think that this plays into this thing that journalists have to be more productive than they ever were in the past,” he said. “But in a ranking system what you don’t get is how long it might take to do different types of stories.”

The tables can be unfair for more experienced scribes who naturally take an expansive and meaningful purview, Gawenda said: “Not all journalists can be measured on how many stories appear in a week. It’s dangerous to judge the quality of stories by how many hits you get or what page you’re on.”

News’ Browning hit back: “I hate to rain on the parade, but there is no secret here. What you have is highly informal feedback sent to 200-plus staff each Monday celebrating successes of the week. This came about after our people in Adelaide asked for more feedback from management.”

But the cat could be out of the bag. On the Addy‘s Melbourne sister the Herald Sun, staff were informed at an editorial meeting last week that every reporter’s online hits would be carefully scrutinised (alongside the introduction of earlier deadlines and a new super desk). Other tabloids are believed to be eagerly adopting a similar system.

The Australian‘s wily media diarist Nick Leys reported yesterday that in Sydney official News metrics included “the number and cost of legal issues; the number of stories in the first 15 pages of the paper; the proportion of stories secured from ‘internal and external relationships’; and the number of customer complaints”.

Crikey sends out a weekly ranking of the “unique browsers” various stories get to its journalists, but the metric is complicated by the fact the majority of yarns are behind a paywall.

In the descriptive part of his wrap to Advertiser journalists, Ashenden balances hard data with a more discursive assessment of the yarns that tickled his fancy. His affinity for political editor Mark Kenny shines through, who he heralds for an interview with Cory Bernardi:

“Strong follow to an ongoing political saga. The perfect example of why we should always chase the inside, first-hand story — even weeks after an initial event.”

The “lifestyle story of the week” went to Michael McGuire for “a fantastic, comprehensive but easy-to-read account of the elusive cure for cancer”, while the sports story of the week went to Zac Milbank for a “great yarn which involved two players, two clubs and two eras, woven together to give us an insight into two of the most talked about trades involving Adelaide players in the past decade”.

But it’s not all shits and giggles. Ashenden takes a cruel scalpel to one unnamed political writer, who he criticises for using the word “after” in the lead of one story: “Can we please try to minimise using the word after in first pars. If you find yourself using it, see if there is a better way into the story, making it much more active and dynamic.”

The idea of ranking journalists has exploded since easily-measurable internet analytics came crashing in 10 years ago. The Gawker Media Big Board tracks in real time — via a HD display on the newsroom wall — the number of hits across an online empire including Gawker.com, Lifehacker, Jezebel and Kotaku.

Gawker publisher Nick Denton is known to prize his invention as something new in journalism; in the trailblazing 2011 documentary Page One: Inside the New York Times the Big Board was mocked as journalism’s opposite. (Denton has since partially backed away from his fixation and now seems happy for his writers to occasionally “go long” and “win the internet”.)

Gawenda says Malcolm Brown, the subject of last night’s Australian Story on the demise/reinvention of The Sydney Morning Herald, would’ve become enraged with such a ranking system. “There would have been many times when Malcolm would’ve been beside himself with fury that he was on page 10 rather than page one and a system like this would just reinforce that fury,” he said.

He says there was a place for a low-key wrap of stories — a kind of “what I liked this week” email — but to actually award votes for prominence and page placement is “over the top and ridiculous”.

Journos’ union the Media, Entertainment and Arts Alliance is believed to be investigating the matter.

…. and what happens when they screw up, like not following those “PCP(?)” thingy’s, hanging behind the toilet door. Or do a “Steve Lewis”?

Crikey even handed as always when it comes to News Limited, Gawenda clearly would be an unbiased source,
So you ranking stories and the Gawker ranking stories is okay but not okay if News do it?

This seems to be a mini-replica of how academics are assessed. At least where I work. Would Deano would make a good Vice-Chancellor?