What life in a Siberian gulag will mean for Pussy Riot

The lawyer for two jailed Pussy Riot singers speaks to Crikey as her clients are transported to a Siberian penal colony. Russian-born journalist Sasha Petrova finds out what conditions the women will face. 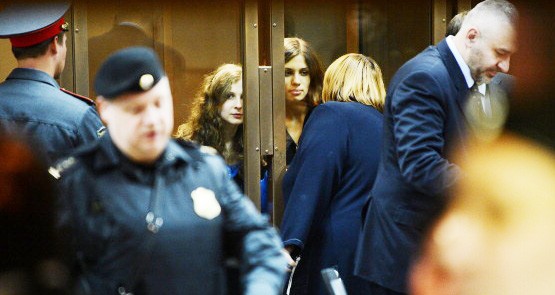 “And so you’ve found yourself here, in the correctional colony. Of course this isn’t the best place in the world, but what can you do? The court has sentenced you to a certain period: for some it’s one year, for others two, and for others even longer. Even so, remember that your life hasn’t ended and wherever it is that you find yourself, you must always remain civil.”

This is the absurd introduction for convicted criminals, found on the website of the Federal Service for the Execution of Punishments — the government body overseeing Russia’s vast network of remote penal colonies that two members of the punk band Pussy Riot were convoyed to recently. Not unlike Russia’s president, who recently guided a flock of Siberian cranes towards their winter habitat in a hang glider, its prison system is as ludicrous as it is frightening.

The singers, Maria Alyokhina, 24, and Nadezhda Tolokonnikova, 22, have been sentenced to two years in the same facilities as the Solzhenitsyn-donned gulags of the Soviet-era.

“We appealed for the court to defer the sentence on the grounds that they have little children but the court didn’t even bother to look into that and returned the papers unanswered,” defence lawyer Violetta Volkova told Crikey. “They gave absolutely no explanation for their return.”

The appeal was lodged when the women were still undergoing trial and at the time, the court was obliged to consider it. Volkova claims that the return of documents via the infamously slow Russian postal service was a tactical move. “The letters were sent by post deliberately so that by the time we received them, the girls had already been moved. It’s not the first time the court hasn’t complied with the law and got away with it.”

Indeed the Russian legal system is mired in controversy; arguably more concerned with cracking down on dissent than executing justice. Among the most notorious examples are the ongoing “farcical” trial of the assassination, six years ago, of journalist and Chechen war critic Anna Politkovskaya and the Yukos affair that saw the politically motivated, unjust jailing of former oil tycoon Mikhail Khodorkovsky among many others.

The two members of Pussy Riot, along with Yekaterina Samutsevich (who has since been released), were convicted of hooliganism motivated by religious hatred. They sang a punk prayer in an Orthodox Church, begging the Virgin Mary to get rid of then prime minister Vladimir Putin. But Volkova told Crikey: “What they did is not even considered under Russian law to be a crime. So the fact that they were sentenced as criminals doesn’t correspond with reality. Now they have been sent to join others who have been identified as criminals by the court.”

She has it from unofficial sources that Alyokhina has arrived in Siberia’s region of Perm, and Tolokonnikova in Mordovia — both hundreds of kilometres away from their Moscow home. It is assumed that Tolokonnikova will be heading to the same camp where Yevgenia Khasis, who was last year convicted of murdering a human rights journalist, is serving her sentence.

Judging by the nature of their “crime”, Volkova speculates the women will end up in colonies of the “general regime”. This means they will be allowed 12 parcels, six phone calls and 10 visits per year. But it also means that they will be exposed to Russia’s morally righteous and eerily Orwellian corrective philosophy, based on systemic isolation and exhaustive labour. The women will spend long hours toiling to contribute to the same Mother Russia that they so disgraced with their crime. Most commonly this is done by sewing various kinds of military uniforms for the country’s myriad military institutions.

In some regions, particularly in Perm, temperatures can reach minus 50 degrees and illness and disease are rife, while medical staff largely negligent. As a result of overcrowding and poor medical treatment, an overwhelming number of Russia’s estimated (according to the prison system’s own figures) 717,400 thousand prisoners are infected with tuberculosis and HIV.

With P-ssy Riot’s high profile and a majority attitude opposing what is seen as a desecration of the honour of the Russian Orthodox Church, there are also fears for the safety of the two women once they arrive in the camps.

“We suspect that prison mates are being instructed on how to meet them,” Volkova said.

It will be an average of 10 days after their arrival at the penal colony’s territory before the women will be meeting the other prisoners. Currently they’re spending time in isolated cells. According to the prison colony’s websites, the “relatives of the convicted” will be informed of their exact location after they have undergone a quarantine period. This involves medical tests, character assessments, meetings with prison officers and an overview of the correctional system’s regulations.

Volkova told Crikey the women’s families are agonisingly anxious. “Naturally this is a tragedy for the children because they love their parents very much,” she said of Maria’s five-year-old son Philip and Tolokonnikova’s four-year-old daughter Gera. But even more poignant is little Gera’s limited concept of what has happened to her mother. “She simply knows that her mother was put in prison by the president.”

The girls from Pussy Riot are only a few among the tens of thousands of protesters that have taken to Russia’s streets since last December, after Putin announced he was running for re-election for a third term as President.

Volkova thinks that Russia is divided in its opinion over Putin’s dictatorial style of leadership: “We have people who consider his rule critically and there are those who are neutral. They watch the television programs of propaganda and take them at face value. And of course these people are critical of our girls because these central channels portray a pretty negative image.”

Volkova is an outspoken critic of the corrupt legal system in Russia. Is she afraid for her safety? Well there’s a motto here that goes: “Do what is asked of you and come what may.” So we work under this motto. We just do what is our inescapable duty.”

Exiled punk rockers are just the beginning in Putin’s Russia

Guantanamo is full of innocent people who have never been put to tiral.. That’s the world we live in.

Well this is what we here do to hundreds of people who have never seen a court or committed a crime of any kind anywhere.

You lefties wanted laws against acts that offend people on the basis of their religion, now you have them. Enjoy!

Um, Patriot. Shitty trolling attempt. This article was about certain goings on within the ‘legal’ system of one of the most corrupt governments in the world. You would be hard pressed to call Putin a “lefty”.

Try harder, Patriot – so far you are not up to snuff.