Penny’s loss is the SDA’s gain: how Wong got rolled

The Labor Left is furious that Finance Minister Penny Wong has been placed behind Don Farrell on the South Australian ticket. Why was she overlooked in favour of a 'faceless man'? 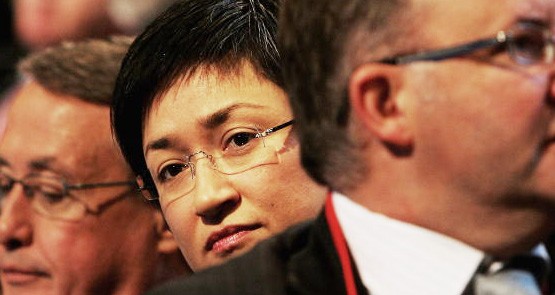 Anthony Albanese’s bid to have the ALP National Executive overturn South Australian Labor’s decision to put “faceless man” Don Farrell first on its Senate ticket will present the party’s ruling body — on which Julia Gillard has a vote — with a moral quandary.

Gillard stayed mum this morning on the SA branch’s state convention ballot that saw the Shop Distributive and Allied Employees’ Association-backed candidate triumph 112-83 over his more senior and talented colleague, finance minister Penny Wong, leading to strong suggestions Labor was out of touch with public opinion.

The SA Labor Right — dominated by the socially conservative SDA — commands a majority on state convention floor. Wong, from the Left, was always going to be consigned to the No 2 spot on the numbers. But Albanese and the National Left are arguing that there is a moral imperative to reverse the outcome.

One senior Left faction source was scathing: “It’s a small group of SDA people that don’t understand that public opinion matters. You can’t roll one of your most senior best performing finance ministers — when one of our arguments is about keeping the economy strong — with some guy that no-one’s ever heard of.”

It’s worth looking at exactly how the SA branch determines Senate ballot positions. The party’s 47 sub-branches elect delegates as a proportion of their number of members. But 50% of the vote at convention is controlled by affiliated unions, of which the SDA dominates. The SDA edifice spans not only the union vote but also MPs and branch activists spread out among the party organisation.

By contrast, in preselections for SA lower house seats, 25% of the total vote is drawn from party members in the seat in question, and 75% from the convention. If that formula were applied to the Senate vote, the margin would have been much closer.

Saturday’s outcome mirrored the 2006 ballot when Farrell also secured the No 1 spot. But six years ago, Wong was a rising star and Farrell was SDA state secretary and national president and controlled, as now, the right.

Ironically, in the Suss-x Street machine’s home state of NSW, Senate candidates are technically elected through a 100% grassroots vote — a method that if employed in SA would have resulted in a Number 1 position for Wong. However, in that state, “N40” overrides are routinely trotted out to sidestep democracy. Still, that doesn’t always mean that the Right faction (which controls about 66% of delegates to the Left’s 34% in NSW)  gets its way.

For example, during the 2010 NSW senate preselection, Matt Thistlethwaite could have commanded the No 1 spot but did the right thing and stepped aside to preserve John Faulkner’s seniority.

In all states, it is actually the job of the National Executive — sometimes acting on an administrative committee referral —  to protect serving ministers from humiliation at the expense of state conferences.

The latest stoush highlights the pro-life SDA’s continued hex over party decision making. In the NT, WA, SA (and to a degree in Victoria), it remains the dominant Right union.

The senior left source said the vote was more about muscle flexing. “The SDA are feeling threatened after the gay marriage vote, they’re feeling defensive and trying to take what they think they are entitled to.”

Meanwhile, the suite of democratic reforms recommended in last year’s Bracks-Carr-Faulkner review report remains stillborn. Un-enacted initiatives included direct election of national conference delegates and a vote for the party president on the National Executive. The direct election of state presidents has also been passed over.

The National Executive will rule on the Wong matter on Friday.

Political alchemy: who gets it right on frontbench composition?

Gillard better go back and read her speech- seems it was just words.

Penny is a Woman
Penny is of Asian Background
Penny is Gay
Most of all Penny is intelligent
4 strikes against her.

Why do ordinary members of the ALP bother?

The SDA also got the top spot on the Queensland Labor ticket. Some unknown guy is ahead of 2 sitting Senators, again a woman was relegated to No 2. The SDA is more DLP than ALP. You have to wonder how the extreme Right manages to control the Shop Distributive and Allied Employees’ Association when so many of its members are women. The SDA leadership holds views few women would share, and the fiasco over the Senate spots shows where they think women belong.

The order on the Senate ticket in this case has nothing to do with gender/ethnicity/oreintation or IQ.

It is a simple left/right barney that so often rends political parties.

Andrew, your “senior left source” is wasting your time mate. SDA is threatened? Rubbish. It’s not about the SDA needing a win or even about whether it’s Penny or Don. The Right faction gets the top spot, Left faction gets second spot. Both spots will win and Penny & Don both go to the Senate – as in 2006. What a waste of time and typical of the sort of babble the Left worries about. “We’re both going to win but I want to win first because I’m more clever than you”. Here’s a quick message to your “senior left source”: Get the numbers and you will win first. Until then, shut it. Albanese, you first.