It's the Asian century, so why is nobody there covering it? The AFR continues to bleed advertising revenue. And the offensive headline on The Daily Telegraph website.

How The Oz (actually) missed the coup. As far as gloating paeans to your own masthead’s beneficence go, nothing could top Peter Van Onselen’s extraordinary effort in The Weekend Australian sledging Fairfax for falsely treating revelations from Maxine McKew’s Tales from the Political Trenches as news. The Oz — and specifically Canberra politics analyst Dennis Shanahan — had “scooped the pack” two years ago in describing Rudd’s downfall while the competition dithered. As PVO wrote:

“McKew’s insights can’t be classified as revelations because the events were reported at the time by this newspaper.

“While readers of the Fairfax press might have been shocked at the sudden removal of a prime minister in his first term in the middle of an uncompromising standoff over a new mining tax, readers of The Australian were treated to blow-by-blow accounts of the backroom manoeuvring against Rudd, and the attempts at compromise regarding the mining tax. For months our political bureau reported on those developments.”

The online version, packaged as “premium content”, even contained a helpful series of links — “How Dennis Shanahan scooped the media pack.”

Van Onselen and The Oz seemed to be smarting because it was Fairfax that had secured the exclusive extracts from McKew’s book. But completely missing from the analysis was any admission that on the morning of the Gillard coup — June 23, 2010 — Shanahan had got it completely wrong. — Andrew Crook (read the full story here)

Where are the media on Asia? Julia Gillard says the media has to play its part in the so-called Asian century, calling for more focus on Asian economies. Don’t count on it — there’s no money in it and no interest in expanding coverage of Asia. Commercial TV carries little if any news from Asia and has no interest in lifting its game. One of the biggest Australian investors in China is Seven Network owner Kerry Stokes, but there’s no commitment to reportage.

The ABC has the largest representation in Asia, with correspondents in China, Japan, Indonesia, India, Thailand and Papua New Guinea. SBS is stuck rebroadcasting Asian language TV news reports of varying quality and interest. In print, the Fairfax broadsheets have the highly-regarded John Garnaut in China, The Australian Financial Review has Angus Grigg and Lisa Murray and The Australian is replacing Michael Sainsbury who has just taken redundancy (as did the best writer on Asia in local media, Fairfax’s Hamish McDonald). The Oz and Fairfax also have an Indonesian bureau.

And that’s about it. The papers have all fled Tokyo in favour of China, despite the tumultuous political and economic situation in that country, still one of our biggest strategic partners. One headline on page one of today’s AFR said “Little cash for big ideas” — it could apply to the efforts of media in reporting back to Australia. — Glenn Dyer

Few ads, more Packer in The AFR. Fresh from canonising James Packer, The Australian Financial Review endured another miserable Saturday and Monday in terms of advertising. Amid reports that some staff are becoming uneasy with the paper’s gushing coverage of business and its reflexive instinct to blame the federal government, the weekend edition had just 11 ads in a 64-page edition, three of those house or contra ads. The paying ad ratio was less than 3%, the lowest since the federal government switched its advertising online at the start of the month. There were no display job ads from the private sector or state governments.

By way of comparison, Saturday’s Sydney Morning Herald had a solid book, including 21 display job ads. The paper had one job ad from the War Memorial in Canberra. The rival Weekend Australian did better than The Fin, but nowhere near as good as The SMH. The Oz had 11 display job ads, including one for the CEO role at the Customs and Border Protection Service.

Today’s AFR has just 19 ads, of which three were house ads. Of the 16 paying ads, there were four bank interest rate ads (like The Oz) and two property ads. A rough estimate of the ad ratio put it at around 9-10% of a 48-page book. The Oz today had 17 ads (five hour ads), plus half a page of “general classifieds”. The paper had four interest change ads from the banks and a half-page from HSBC (which The AFR also had). Its pay ads accounted for just under four pages or around 10% in a 40-page (broadsheet) paper.

Staff are very aware of the bleeding. Some have told Crikey they question whether the blatant pro-business approach of CEO Brett Cleff and editor-in-chief Michael Stutchbury is the answer. Its fawning promotion of Packer hasn’t been matched with any analysis.

It’s also been pointed out that not many AFR readers would have picked up another point: the active sponsorship of the Packer dinner on Thursday night in Sydney by investment bank Deutsche Bank, one of Packer’s two bankers of choice (Deutsche is used when the main bank, UBS, is conflicted). Deutsche constructed and implemented the deal (via a complicated options arrangement) that saw Packer emerge with 10% of Echo, which owns the only operating casino in Sydney. There seems to be a conflict of interest here between Deutsche and The AFR promoting “conversations” with leading business people while running dead on disclosure and transparency. — Glenn Dyer

Party over for this little gay duck. “Gay party boy”? We were offended on new NSW MP Alex Greenwich’s behalf by this headline on The Daily Telegraph website, uncovering details of “risque beach parties” to raise money for lifesavers (we believe, shockingly, some men wore speedos): 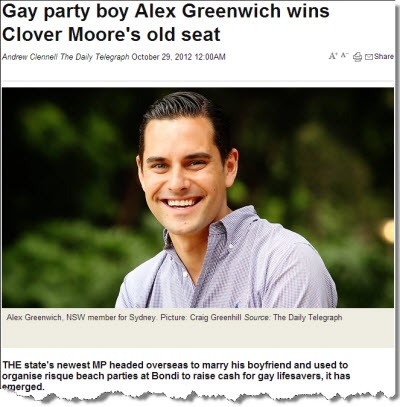 He, however, wasn’t fussed:

Rivers of lead flowing at a scooped <em>AFR</em>

“The Fin” – why pay for ad space when they do it for free (in their glowing partisan reporting of business)?

[And – re Greenwich – “from The Tele-Tubbies”? If their history tells us anything, that’s probably not “water”.]