‘Fuck, this must be a good business’: Packer on casinos, Kerry

James Packer has won over NSW politicians with his plan for a massive new casino and hotel development in Sydney. Last night he was sharing more of himself than ever.

James Packer might have sold out of the media, but don’t think for a second he’s forgotten how to use it.

Packer’s very public campaign to build a casino in Sydney’s massive Barangaroo precinct has seen him regularly grace the cover of The Australian Financial Review, and last night he granted the paper a rare on-stage interview at a dinner held in Sydney. Talking hours after his Barangaroo casino plan passed its first hurdle — the first application stage has been signed off by NSW Premier Barry O’Farrell — Packer moved to play on Sydney’s heart strings, declaring the project was more than about money:

“This is more than economics for our company. I’ve lived in Sydney all my life; this city has been very kind to my family for many, many years and I think this is an opportunity for us.

“There is no one anywhere who is going to try harder than our company to build something special.” 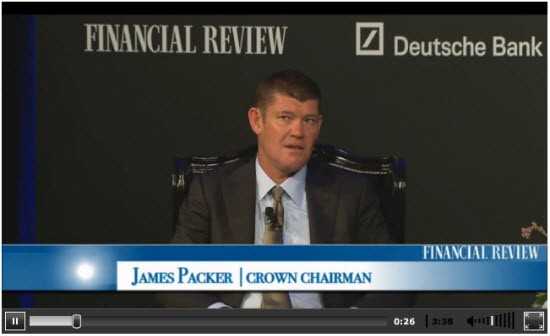 Packer’s casino pitch will be a long process, so the event also saw Packer range over a number of topics. We’ve extracted three nuggets …

James Packer says the greatest lesson from his father was persistence:

“Dad was an amazing man and I think that he a capacity to keep going and be very determined about things when he needed to be. That was a real lesson. I don’t think that life for any of us is a one-way road. But just keep going.”

“I spent a lot of time in casinos with my dad and I ended up thinking ‘fuck, this must be a good business’. And I say that with massive respect to my dad.”

Packer admits he was caught out by the GFC, which saw billions carved off the value of his casino assets, thanks to a few overly aggressive bets in the US market:

“In truth I was being too aggressive. I had too much debt … I just assumed the world was going to keep growing and if you weren’t knocking out 20% compound returns you were doing badly.

“I think that I didn’t understand the relevance of risk-adjusted returns.”

Packer isn’t shrinking away from his One.Tel mistake, but he does want to put it in context:

“I think One.Tel was obviously a big mistake but OT was a time when we were pretty frenetic … a bunch of the things did really well and there was a bunch of focus on the one that did badly.

“It was a mistake and I got it wrong, but I also had a fair bit to do with a bunch of things that we got right.

“That was a time when I really took the view that traditional media, which was the bedrock of our family business, was structurally challenged and we had to reposition our asset allocation out of that business.”

With Karl, James Packer showed he has his swagger back

Media cuddles up to Packer with few hard questions

While James Packer may have influenced the State government enough to change the state laws, will he be able to convince taxpayers of NSW? Edward James