An enduring gateway at the ice end of the world

Antarctica's international runway was only meant to be a temporary solution to the challenge of pitting engineering against Earth's most extreme conditions. Now it's melting, writes journalist Jo Chandler. 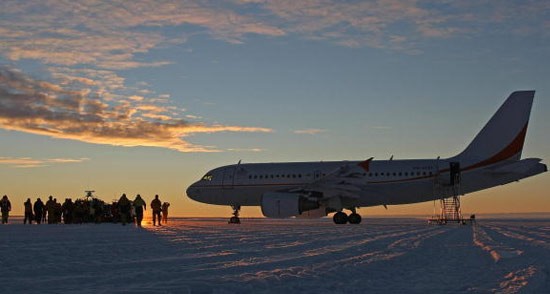 The blue ice runway of Wilkins “International” Airport, the hub of Australia’s $46 million Antarctic airlink, is skating-rink slick. The surface is virtually polished by its frostbitten corps of keepers, who use laser-levelling technology to grade and shave the ice, and groom it to keep it snow-free for touchdown.

At the end of delivering an otherwise routine aircraft landing spiel (“please check the seat pockets for any personal items”), the flight attendants on the chartered A319 Antarctic Airbus — standard-issue lipsticked smiles adding a touch of glamour to their extreme weather kit — helpfully remind passengers disembarking at Wilkins to pull on their gloves (lest they leave tender skin fused to the metal hand rails as they head down the stairs) and to make sure their boot chains are correctly fitted (or risk their dignity, a nasty injury, and an immediate return journey to visit a casualty ward in Hobart — it’s happened).

Landing an aircraft on an ancient glacial plateau is also not without its perils, as highlighted by the Australian Antarctic Division’s decision — making news this week — not to schedule Airbus flights to Wilkins in January, the peak of the busy summer science season.

It came after reflecting on the frustrations of the past two summers, when daytime temperatures at the remote airfield — some 70km from Casey station, and 4000km due south of Perth — nudged consistently above 5 degrees. Melt on the runway surface made conditions too dodgy to safely land the Airbus, and played havoc with the ambitions of Australian and international researchers desperate to reach the Casey, Mawson and Davis ice stations to maintain critical annual surveys and to initiate long-awaited new projects. Program overseers weren’t going to risk a repeat this year.

The conditions over those two summers also raised questions about the longer-term viability of the airfield, and fed mutterings that the blue ice runway was shaping up as a white elephant. While Wilkins was never envisaged as a permanent fixture — it is painstakingly carved back onto the slow-moving plateau every year by the ground crew of hardy polar bears who bunker down by the runway for the duration of the frigid summer in a village of shipping containers — it has also never come close to realising the dream that it would provide a busy thoroughfare for as many as 20 flights each summer.

Last year only four flights landed; the year before, just two. This season’s cautious program sees six return flights scheduled, in December and February, avoiding the height of the polar summer. But seasoned expeditioners — conditioned by capricious Antarctic weather and the devilry of “the A Factor” (think Murphy’s Law, with chilblains) — know better than to count on anything until they are airborne. Even then there will be no guarantee that they won’t find themselves back in Hobart 10 hours later (that, too, has happened).

The biggest issue, as veteran Antarctic pilot Garry Studd explained to me back in December 2007 — as we cruised south on the first Airbus flight to deliver expeditioners to Wilkins — is the lack of surface definition and contrast: “Even with unlimited visibility, situational awareness and depth perception are very difficult over a white ice sheet.” In other words, with all that white, it’s a tricky business trying to figure out where the sky ends and the land begins.

“And it’s slippery; we have to be very, very careful with the friction coefficients.” This is where warm temperatures create problems. These measurements determine the grip of the aircraft wheels on the ice, and consequently the braking ability. Wilkins’ ground crew “actually measure the friction hour by hour all the way down the runway”, Studd said. This information is fed back to the pilots, who know they have enough fuel to turn around and go back to Hobart if conditions aren’t perfect when they circle the runway. The plane is generally scheduled to land very late or very early in the day, because the warmer it gets, the more treacherous the conditions.

“It’s not so much a question of stopping,” says Studd, reassuringly. He’s explaining this at 35,000 feet over coffee on the flight deck as his co-pilot and the computer take care of the boring bits between the Hobart takeoff and descent to the ice.  “I mean we’ve got the best part of four kilometres of ice runway to stop on. But the more difficult thing is the directional, lateral control of the aircraft. We can’t have any great amount of cross wind. But we do have the luxury of having been able to build and design a runway with no shortage of real estate. So we could actually build it directly into the prevailing wind.” The breath of the continent is enlisted to bring the Airbus to a stop. Well, that’s the plan.

There is something proper about the steadfast resistance of the last great wilderness to human assault. Flying south always seemed too easy. Old lags view a five-hour journey in a business-class seat as a cop-out on the long, vomitus Southern Ocean passage on an icebreaker up through the wild latitudes that are etched into Antarctic lore, a rite of passage.

American writer Barry Lopez expressed similar qualms when he flew from Christchurch down to the American polar settlement of McMurdo. “I don’t trust the speed with which I got here. It takes some of the remoteness out of the place … I don’t know if that’s good, to lose a sense of how complex, how very different from every other place this one is.” (My own observation is that the flight is not without its own magic. Passage through the mother-of-pearl cloudscape of an Antarctic dawn is truly heavenly.)

For 50 years Australian expeditioners dreamt of establishing a reliable seasonal airlink between the last two unbridged continents. Several mooted attempts to build them on bare rock sites closer to the established stations were thwarted over the years by logistics, lack of funds or environmental concerns. Now there are signals that some such plans may be revived as the Antarctic Division reviews its entire air program to deal with the difficulties the slushy recent seasons have presented not just at Wilkins but at the station ski-ways which are critical to research, provisioning and safety programs.

Wilkins runway — named for one of Australia’s most intriguing and overlooked polar adventurers and aviators, Sir Hubert Wilkins — materialised in 2007 out of the growing imperative to expand scientific programs on the ice to better measure and decipher global warming. Scientists were hungry for remnants of past climates buried deep in the ice sheet, and the lessons they might yield for future climate. Glaciologists, oceanographers and biologists also clamoured for opportunities to collect observations and data about changing conditions on the ice, the implications for sea levels and deep ocean currents, and the impacts of warming and acidification on the creatures living in and around the Southern Ocean.

To again borrow from Lopez, “more and more often, Antarctica is seen as a place from which to take the measure of the planet”.

But she was never going to make it easy.

*Jo Chandler has twice visited Australia’s Casey station on Antarctic Division media fellowships. Her stories on the science programs were published in The Age and her book, Feeling The Heat (MUP, 2011), now shortlisted for the UNSW Bragg Prize for Science Writing

Thank you, an interesting read.