SMH seeks to undo redundancies ... Democrats falter in ACT election, so where to next? ... ca alors, Rudd wows with his schoolboy French ...

Who indeed. Who is the Twitter king of a national Commonwealth agency who seeks to have one of his public affairs officers sacked for her use of Twitter? Solve the riddle with an anonymous response here.

Come back, your paper needs you. The Sydney Morning Herald news director Darren Goodsir has been approaching staffers who have accepted redundancy, asking them to consider staying on and how it could be made worth their while. “They realise they’ve cut too deep,” said a recently departed scribe. The reaction has been lukewarm: a pay increase/new role still doesn’t match the lure of a huge payout. A second tranche of redundees will leave at the end of this month and a much smaller batch in December.

Setback for the Democrats. The Australian Democrats’ bid to survive in the face of a bruising internal split and declining membership has suffered a setback. Darren Churchill, who ran for the Democrats in Saturday’s ACT election, appears to have failed in his quest to become the party’s only MP. He received 137 votes. In an electorate where more than 67,000 votes were cast, that gives him 0.0% of a quota. That result puts him well behind the “Bullet Train for Canberra” ticket, the Australian Motorist Party, and the Liberal Democratic Party (we don’t know who they are either). 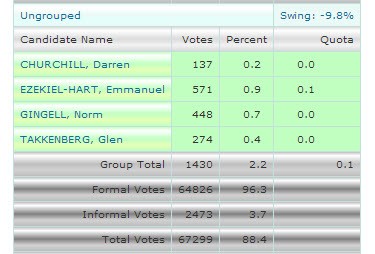 Exactly what this means for the troubled Dems is not clear, however, because some members reckon Churchill should not have run as a Democrats’ candidate because they claim his membership was suspended (read about it here). Churchill says the members who voted to suspend his membership had no right to do so, hence his election posters featured the Dems’ logo (he was ungrouped on the ballot paper because the Dems are not registered in the ACT). Crikey continues to receive tips from both sides of the nasty Dems’ split in the wake of this story. So who has nominated to be the party’s new national president, and who looks likely to win? We hear Churchill intends to nominate — has anyone put their hand up from the other faction? Keep the tips coming.

Canberra denied? An aggrieved tipster has complained that Simon Sheikh, who is seeking preselection for the Greens in the ACT Senate race, is snubbing Canberra on his websites. Our source reckons this pic is of Hyde Park in Sydney, while this pic is a “red-soiled bush track far, far away from the nation’s capital”. Sheikh (who now lives in the Canberra suburb of Narrabundah, after recently moving from Sydney) declined to comment on the photo scandal, although it should be noted these are his general websites and have not been set up as campaign sites.

Kevin Rudd, oh la la. Tips has been running photos from politicians’ pasts and today’s entry features Australia’s most active backbencher, Kevin Rudd (he’s in the middle row on the right, although we probably don’t need to tell you that — the hair hasn’t changed much). The 1971 pic, of Class 9A at Nambour High School, was sent in by Jon Haddock, who’s in the middle row on the left. We pumped Haddock for juicy gossip, and received this charming (and quite revealing) insight into Rudd’s early linguistic skills:

“Kevin was an excellent student while at Nambour High … but as far as I can remember did not shine at any one subject until he reached senior (grades 11 and 12). At that point he joined the debating club, representing the school team in a number of debating championships and leading the school to victory on a number of occasions. Earlier, in grade 9 (around when this photo was taken), his standard of scholarship became apparent in an incident in our French class. We all spoke French with broad Queensland vowels. Not Kevin. He arrived at class one day for a viva voce exam, having evidently prepared the reading from a set of French lesson tapes. He read the required passage in his best French, brilliantly acquired by listening attentively to the commercial recording he had somehow obtained, perfectly pronounced, but entirely in an American accent.” 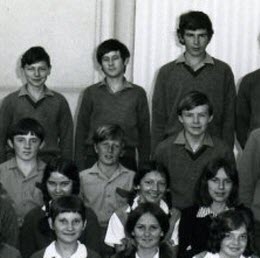 So, got any good photos of politicians from years gone past in a shoebox under your bed? Time to let them shine! Send us the pic in an email or post it to the address on our website.

Dear Leslie, why isn’t my husband curious to know all about me?

I met one of the LDP candidates from the previous ACT election (friend of a friend). I heard that he’s the king of home brew, but that’s pretty much all I knew about him.