Politicians in South Australia and the ACT featured this week, while Kevin Rudd still lurks in the shadows, writes Sentia Media's John Chalmers.

Plenty of newcomers to our media coverage chart this week. It was mission impossible for former SAS commando Martin Hamilton-Smith, losing by a solitary vote to Isobel Redmond in the SA Liberal leadership challenge. Yet the party seems intent on further damaging its handy lead in the polls by leaving the door open for the unlikely installation of white knight Alexander Downer.

Meanwhile the ACT election saw Chief Minister Katy Gallagher and Liberal Opposition Leader Zed Seselja in a close tussle. Federal Greens leader Christine Milne made an increasingly rare appearance in our chart supporting her candidate Meredith Hunter, who will hold the balance of power in the ACT.

Opposition Leader Tony Abbott again garnered international media attention after televised comments he made about the baby bonus threatened to reignite the gender wars — and led him to apologise to Prime Minister Julia Gillard, who stands by her recent speech and the traction it is gaining her. Shadow Treasurer Joe Hockey may be missing the point when he bemoans the eggshells his boss must now walk on when discussing family policy.

Hockey was also in the news decrying Treasurer Wayne Swan’s mini-budget, which saw Finance Minister Penny Wong gain in coverage. Other movers include an ever-present Kevin Rudd and Defence Minister Stephen Smith, following the tragic loss of another soldier in Afghanistan. 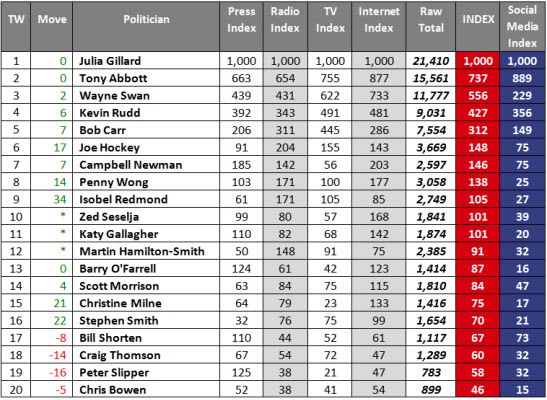 Leaders past and present ruled the airwaves this week …

Anthony Mundine’s ugly, racist pre-match banter had the desired effect in publicising The Man’s next fight …