Palestine’s Street of Martyrs paved with anger and regret

Politics infuses everyday encounters in the West Bank. Our correspondent continues his tour of the Middle East with a visit to a Palestinian refugee camp where martyrs are honoured and tensions bubble. 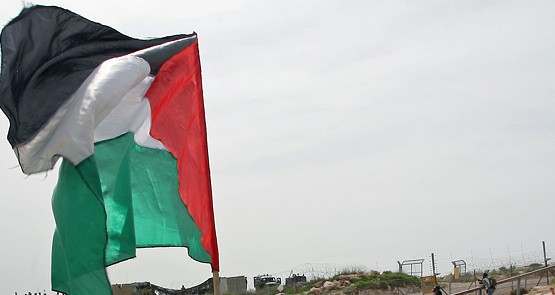 I return to Ramallah from Taybeh, beer and wine in tow, to find Shehada, the Palestinian violin maker from bus 18, waiting for me outside the Al-Wehdeh hotel.

He is here to take me to his home in the Old City, to share iftar, Ramadan’s daily fast-breaking meal, with his family. It’s an awkward honour: only Shehada and his father, an architect, and his incredibly bright seven-year-old sister can speak English, and my Arabic is limited to the point of non-existence. But I am welcomed with open arms nevertheless and by a seemingly endless parade of relatives: Shehada’s mother, sisters, grandmother, aunts and cousins are all very pleased, or so I am told, that I have come to Palestine for Ramadan. Shehada’s six-year-old brother is pleased that I’ve come, too, but mostly because he likes strutting around in my aviator sunglasses, pot-belly puffed out and hair slicked back. “Don’t worry about him,” Shehada says. “He’s crazy.”

It is difficult not to notice there is a gender imbalance around the table: women outnumber men two-to-one. This, Shehada tells me later, is because two of his uncles are serving time in prison: one for killing Israeli soldiers during the second intifada and the other for belonging to a “radical organisation”. A third uncle has recently been released, on charges that aren’t mentioned, but instead of joining us for qatayef and tea he is tiling the entryway to his house, which was left to deteriorate while he was away.

“He has to tile at night,” Shehada tells me, “because he works as a labourer in Israel during the day.”

After dinner, fully sated, we move downstairs to Shehada’s work room, where several of his early violins hang on their scrolls from a piece of fishing line and a cello, a half-finished gift for a friend, sits waiting to be coloured and varnished. Under the arbour of the courtyard outside, beneath a canopy of vine leaves and low-hanging grapes, he fires up a shisha while his sisters and mother wait on us, plying us with tea and dessert like waitresses, much to my discomfort. Shehada shows me episodes of an Egyptian web series in which a group of bank robbers on the run from the Israel Defence Force’s evil leaders take refuge with Hezbollah in Lebanon, the Assads in Syria, and the Ayatollah in Iran. I can’t understand much of what’s going on, but it’s safe to say that hilarity ensues.

Eventually, talk turns to rather more serious things. As the water pipe bubbles and clouds of apple-flavoured smoke meet the grapes, Shehada expresses anger at his uncles’ prison sentences. Recalling Ala Jaradat’s evocation of “tensions on the home front”, most of this anger seems to be aimed not at the Israeli occupation but at the Palestinian Authority. Hatred for the former never goes away, of course, but is constant enough to become part of the scenery. It is the sense of outrage at the latter that is new and so striking.

Shehada says he doesn’t support any political group in Palestine, but then goes on to praise Hamas at length. “If I had to choose a group,” he says, “I would choose Hamas. They are the ones who believe what I believe.” And what’s that? “That we have to fight Israel. That we have to fight it to the death and defeat it.”

“Even the infants cannot stand to live like this. You can hear their protests.”

Two days later, on an hour-long bus ride, I content myself with Thomas Friedman’s From Beirut to Jerusalem, the former foreign correspondent’s excellent memoir, which was written long before he ascended to the lofty heights of The New York Times‘ op-ed page, contracted altitude sickness and went mad. My Palestinian travelling companions and I pass the Israeli-only bus stops that pepper the turn-off to the settler city of Ariel, patronised by side-locked Torah scholars and heavily guarded by 19-year-olds with guns.

Before too long we find ourselves in the northern West Bank city of Nablus. No sooner am I off the bus than a moustachioed Friedman lookalike, Hassanein Mobaraka, approaches me with a solicitous smile and flashes his “licensed tour guide” lanyard. My initial instinct is to walk away, but I have come to Nablus seeking a shave and a haircut and Hassanein claims to know a decent barber shop. As the barber begins to lather my face, Hassanein tells me about himself, reeling off what seems to me like a pre-rehearsed script.

“I went to the Bible College of Bethlehem,” he says, “where I specialised in the scriptures. And became a qualified tour guide. And showed Christians around the Holy Land.” His sentences follow an unchanging rhythm and he drags out the final word of each sentence. “I will take you to Jacob’s Well,” he says. “And I will tell you the story of it.”

I know the story already and so ask instead if he’s originally from Nablus. “No,” he says. “My family is from Haifa. We are refugees. We live in Balata refugee camp. We have lived there since it was made only of tents.” And then the pre-rehearsed sing-song rhythm falls away. “Shall I take you to see it?”Balata is, of course, no longer a camp. It is a city on the outskirts of a city, climbing upwards because it cannot spread outwards, teeming with children and decorated with propaganda. My presence here appears to be a novelty, children running up to me and showing off their English, old men nodding with toothless smiles. I am able to conduct a partial conversation with the pharmacist, who cannot speak English, but is fluent, somehow, in Italian.

Hassanein leads me through the warren-like backstreets, pointing out families’ memorials to their “martyrs” — freedom fighters, terrorists, perhaps both, occasionally neither — and telling me the history of the camp.

“We were the first camp in the West Bank to rise up in the first intifada. After Jabalia [a refugee camp on the Gaza Strip and one of the most densely populated places on the planet] we were the first to revolt.

“This,” he gestures down Balata’s Street of Martyrs, “is the result.”

Posters of young, good-looking men, draped in the colours of the Palestinian flag and packing serious heat, plaster the walls and hang from the balconies. Their poses call to mind African-American rappers, but where 50 Cent sports his diamond-studded crucifixes, these boys’ bling is the Dome of the Rock, superimposed behind them. At the end of the street, a little gate opens onto a cemetery, where those killed during the two intifadas are buried.

In a rare vacant lot in this densely populated camp, whose 30,000 residents occupy only 0.25 square kilometres, children play in the rubble where a building once stood. They open the front door and find they’re still outside, and weave in and out of the now-disconnected water pipes that jut awkwardly from the ground.

This, Hassanein says, is where one of the town’s greatest martyrs died. When the IDF found and eventually killed him in a shootout, they destroyed the house in which he was hiding for good measure: better not to leave a ready-made shrine.

It goes without saying that Hassanein has little positive to say about Israel or the IDF. When we walk between two buildings, which are so close together that we have to sidestep along the alley, he overhears a baby crying and sees an opportunity to proselytise. “Even the infants cannot stand to live like this,” he says. “You can hear their protests.”

And yet Balata’s central role in the two intifadas has also allowed him to see the IDF and its strength up close, colouring his views on the Arab-Israeli conflict in interesting ways.

“I am resolved to the fact that I shall never see Haifa again,” he tells me as he leads me back to the camp’s entrance. “It is a tragedy, because my father would like me to take him, but that will never happen.

“We have to use logic, you understand. We have to be rational. We can no more push the Jews into the sea than they can in good conscience oppress us forever. There will never be a Palestine from the river to the sea and there will never be an Israel from one to the other, either. Both are impossible. There must be two states.”

Hassanein admits that extremists on both sides — Zionist settlers, Hamas, and groups like the al-Aqsa Martyrs’ Brigades, which turned Balata into a military stronghold at the end of last decade — threaten the resolve of the two populations to commit to such a solution. “I hate Hamas,” he says. “They are dangerous and they are self-defeating. Israel gave up Gaza and what did Hamas do? It fired rockets. It invited them back! Hamas do not want peace, which is why I do not want Hamas. The Martyrs’ Brigades want to turn Balata into a target, which is why I do not want them. The state of Israel exists. It is only by realising this that we will ever be able to exist ourselves.”

As for the Zionist settlers, Hassanein has a novel solution. “Declare a Palestinian state,” he says. “We will offer them Palestinian citizenship very happily. But I suspect they shall emigrate.

“We have to use logic. We have to be rational. We can’t continue to be two nations that pretend there is only room for one.”

War of words: the media is caught between integrity and institutions

Yes, keep it up. I’m enjoying these immensely.