US markets began the session with an opening sell-off after more disappointing local third quarter earnings numbers, doubts over the future of the EU bond bailout program and Moody's downgrading five Spanish regions. 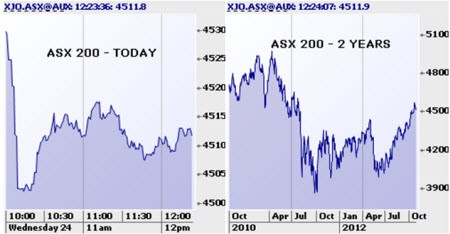 The market is down 33. SFE Futures were down 40 this morning.

The Dow Jones closed down 243 — the Dow was down 263 at worst. US markets began the session with an opening sell-off after more disappointing local third quarter earnings numbers, doubts over the future of the EU bond bailout program and Moody’s downgrading five Spanish regions. Oil, metals and gold down substantially with US bonds up and bond yields down. Apple fell on the launch of its iPad Mini — the market didn’t think the high entry price cost would sell and if it did it would bastardise iPad sales. Others thought it would send Apple to $1000.

Moody’s has downgraded five Spanish regions by one or two notches due to limited cash reserves and forthcoming bond payments. Moody’s said the overall cost of recapitalising struggling banks was likely to be nearer to £34 billion, double the government’s estimate.

For a 5 day FREE TRIAL of the MARCUS TODAY newsletter Click Here. You will receive our renowned and popular Daily email about the stockmarket with all the stuff you need to know ahead of the trading day including:

Subscribe to MARCUS TODAY.  We are sure you will enjoy and profit from what we offer … we have one of the highest re-subscription rates in the financial newsletter industry.